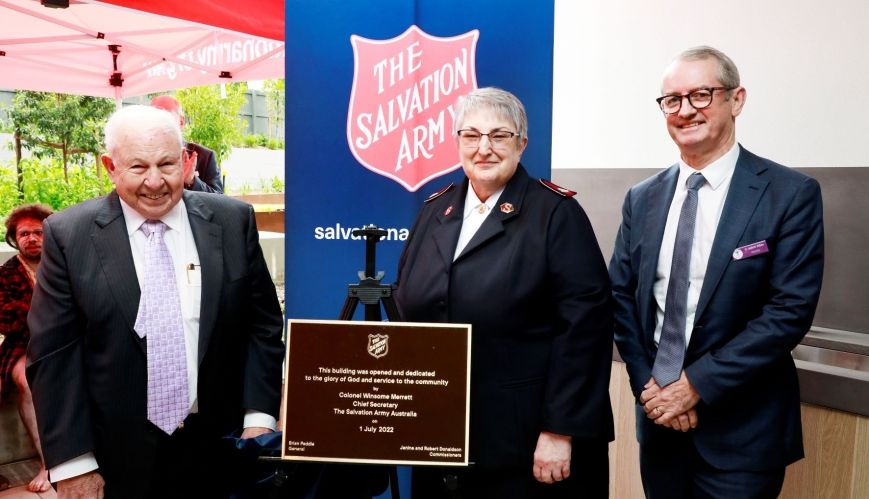 “It’s like winning the lottery,” said one of the first tenants approved to move into The Salvation Army’s new affordable housing complex in the Brisbane suburb of Chermside. “To have the relief of a roof over our heads is just an amazing feeling and has been so life-changing.”

The Chermside complex is the first of its kind for the Army, according to Derek Brown, Salvo Philanthropy team leader. Funding for the project is from philanthropic donations, with the majority from Cory Charitable Foundation, Lord Mayor’s Charitable Trust and The Salvation Army. It is the first purpose-built Salvos Housing project, so the quality is exceptional and specifically meets the needs of tenants, Derek explained. 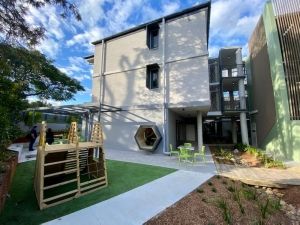 The housing complex and playground.

The complex will provide stable and long-term supported housing for individuals and families with children, catering for up to 100 people at any time. It is expected that thousands of people will be assisted through the complex over time.

The 26-unit complex officially opened on 1 July after multiple challenges and setbacks, including COVID-19 restrictions, flooding in the basement, construction supply issues, and the merger of the two Salvation Army territories in 2018.

The project was made possible through a $5.5 million grant from Cory Charitable Foundation, a sizeable donation from Brisbane City Council Lord Mayor’s Charitable Trust and funding from The Salvation Army.

“I am more than happy today. Everything is way beyond my expectations,” said Doug Cory, founder of Cory Charitable Foundation. “Everything has been done with quality in mind and has such a fantastic feel.”

Doug explained that a large part of his motivation to be involved with the Salvos’ affordable housing projects was his childhood experience. His mother Irene, who raised nine children, struggled to make ends meet even with the support of the Salvos and “was only a step away from being homeless”.

The project also caught the imagination of the trustees of the Lord Mayor’s Charitable Trust, according to Councillor Adam Allan. He said the trust was delighted to support such a sophisticated project that addressed a growing need in the community.

“I can just imagine a sunny day, fully accommodated, children running around the garden playing, and everyone feeling so much more relieved to have a roof over their heads,” he said. 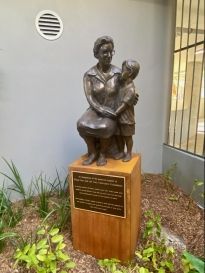 The statue of Irene in the courtyard.

The architects from DC8Studio explained they designed space for community connections, balanced with privacy and security for those who need it. A courtyard between both sets of units creates airflow for hot summer months, minimising energy costs. The complex is surrounded by greenery and has a community garden already stocked with herbs, vegetables and flowers, a basketball and tennis area, a library, and a common room. Not to be held back by the official program, children attending the launch tested the equipment in the playground.

The Chermside complex is designed to fill an ever-growing gap between social housing and private rentals, according to Diane Quinlan, Housing Coordinator. Diane will head up the team that supports the tenants daily.

“We are trying to create a community feel here for tenants who are able to maintain a tenancy but can’t get affordable options,” she said. Diane provided one example of a family who had sustained a private tenancy for over 19 years but had to leave because the landlord put up the rent by $100 per week. Now with affordable rent, families will be able to spend more on food, a vehicle, or family outings. The Salvos Housing team can also refer tenants to other support services if their situation changes, such as losing their job.

“I know great things will happen in this complex,” said Lieutenant-Colonel Winsome Mason, Assistant Chief Secretary for The Salvation Army in Australia, as she officially opened the complex. “The affordable housing model allows tenants access to an amazing home, at an affordable price, all the while being supported by Salvation Army services to ensure they have the best opportunity to recover and rebuild their lives.”