Walking together to a better future Walking together to a better future

Stan Grant was a special guest at a recent Salvation Army webinar where he spoke of his early life and being part of a new awakening.

Proud Wiradjuri man Stan Grant needs no introduction. Award-winning journalist and best-selling author, with more than 30 years’ experience in television news and current affairs, he is also Charles Sturt University’s chair of Australian-Indigenous Belonging. Stan was one of the featured speakers when more than 600 participants logged in to a Salvation Army webinar during National Reconciliation Week 2022. He speaks from the heart as he recalls his early life and being part of a new awakening.

The theme of National Reconciliation Week – ‘Be Brave. Make Change’ – is a challenge to all Australians to explore how each of us can contribute to achieving reconciliation in Australia, valuing First Nations history, cultures and achievements, and encouraging each other to seek unity and equity.

When I think about bravery, I think about the little old wooden church on the mission that I attended as a young boy, near the Three Ways Bridge Reserve outside of Griffith, where my uncle was the pastor. We would go there, including people who had survived the full onslaught of colonisation and the brutality of invasion. We banded together to heal and strengthen our families, and the church was central to that. 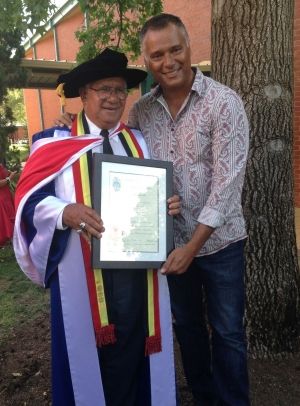 That was the change our people made – in the face of brutality, exclusion and segregation, to stand up and show love, kindness, forgiveness and strength, while never losing sight of justice and our rightful place in the world.

When my father, Stan Grant Snr, was a young boy, his grandfather called out to him one day in our Wiradjuri language, saying, “Hurry up and come home.” When a policeman overheard him [it was forbidden to use Aboriginal languages in public], he was arrested and charged with offensive language and taken to jail.

My father then made it his mission to keep our language and the memory of my great-grandfather alive. He worked with others to write the first Wiradjuri dictionary, receiving an Order of Australia Medal, and has taught non-Aboriginal people to speak our language. When I asked him about that, he said, “Some language doesn’t tell you who you are. It tells you where you are, and this is the language of this place. If these people are on our country, no matter what they’ve done, we have to show them Wiradjuri love, respect, kindness and forgiveness. That is our duty.”

That’s what inspires me – the lessons I got in that little church, the lessons of Wiradjuri respect, lessons of love and kindness and forgiveness, but with a strength as well that never loses sight of justice. I return to those lessons time and time again in my life.

Mine has been an ongoing journey, part of which was to try to make sense of my place in the world. As a young boy I was very aware that we were on the margins. My dad was an itinerant labourer and we moved around constantly from town to town. I changed schools about 14 or 15 times before I went high school and was never allowed to believe that I was worth something, or I was smart. When I was 15 years old I was called up to the principal’s office at Griffith High School with some of my cousins and friends, and indirectly told that we would amount to nothing so it would be better if we left school.

In many respects, I wanted to escape. I wanted to be free of where history had put us. I wanted to be free of Australia. I’ve lived outside Australia for almost two decades and reported on some of the worst conflicts on earth. However, at the same time, I always saw the power of humility and simplicity of faith when the forsaken return to the idea of love that reconnects them with Christ.

I have read a lot about the cold scientific idea that we are reduced to some atomised existence in the world with no transcendence and no thought of the role of God, but I found in the lessons I got as a young boy the strength to be able to see hope in the face of overwhelming tragedy, devastation and destruction. 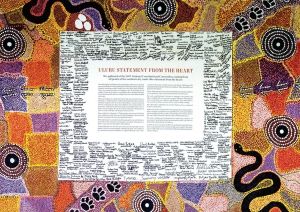 The Uluru Statement from the Heart.

I respect the process that led to the Uluru Statement from the Heart, as I was part of that for some time with the Referendum Council. The Uluru Statement is the voice of the mother of our earth that speaks to this country, calling for a referendum on the establishment of a First Nations Voice to be enshrined in the Constitution.

The Statement asks us to reimagine our country; it asks us to change the way we see ourselves in Australia. It’s not about race, it’s not about politics; it is about reimagining our country with justice and truth and a voice for our people in a Constitution that has so long rendered us voiceless.

The Uluru Statement is an invitation and a gift of love. It offers us a way of being right with God in this land by being right with the people of this land. The message of Christ is that he stands with the afflicted – the church of the forsaken.

There are practical things to do to be able to show your support for the Uluru Statement, to petition your politicians, to make your voices heard. But it’s also an invitation to stop and imagine if this was you, if this was your family, if these were your people. I think sometimes empathy is the hardest thing.

In 2022, the First Peoples of this land remain the most impoverished and imprisoned in the country, they die 10 years younger, and have the highest youth suicide rates in the world. We cannot allow this to go on and ignore it. The people who have paid the greatest price for this country’s success and prosperity are still too often the people who are ignored, and whose voices are not heard.

We talk about what happens in Aboriginal communities as if it exists in a foreign country. People die young in Aboriginal communities; there is chronic overcrowding, lack of housing and inadequate healthcare or schools and other educational outcomes. Are we as a nation comfortable with that? Sadly, I think far too often the answer is yes. Ask yourself, what if it was you?

In the same way that the 1967 referendum, the tent embassy and the Mabo High Court decision were part of the reconciliation journey, the next step – the Uluru Statement from the Heart – is an invitation for all Australians to walk together to a better future.

To watch the webinar go to: https://fal.cn/3qEXY