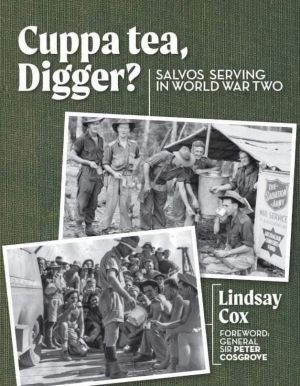 Cuppa tea Digger? by The Salvation Army Museum Manager Lindsay Cox will entertain and inform you, and lend insight into how people survive the frenzy, bloodlust, fatigue, trauma, boredom and carnage of war.

Subtitled ‘Salvos Serving In World War Two’, the book is a 25-year labour of love based largely on more than 180 oral histories of Diggers and Salvos’ philanthropic Red Shield War Services (RSWS) who were there ‘on the ground’, in Europe, Asia, the Pacific and the Middle East. That includes the last stop before the ‘Brisbane line’, the arm-wrestle with Japanese forces on the Kokoda Trail in Papua New Guinea.

The 240-page, hard-cover book comes with 300 brilliant photos, a knowledgeable foreword from General Sir Peter Cosgrove, and the writer’s insights into the costs of battle. To be launched in late November, it also accurately captures the intergenerational, courageous service that led Australians to fully embrace the Salvos as a fair dinkum mob worth supporting.

To obtain the wholesale price of $60 from Salvo Publishing for orders of five copies or more, email Cheryl at Cheryl.tinker@salvationarmy.org.au.