After the success of his debut novel The Baggage Handler, Australian author David Rawlings has reeled out The Camera Never Lies.

It is a story in the same universe as his notorious baggage handler but explores another fundamental part of human existence – this time with the assistance of a film developer.

In the latest offering, the Christ-like figure is a kooky camera shop owner who never seems to age and refuses to photoshop client’s photos. While it’s unconventional, the narrative works.

While Rawlings formerly introduced us to the idea of dealing with our emotional baggage, in this follow-up he vividly highlights the consequences of what living with untruths does to a family. 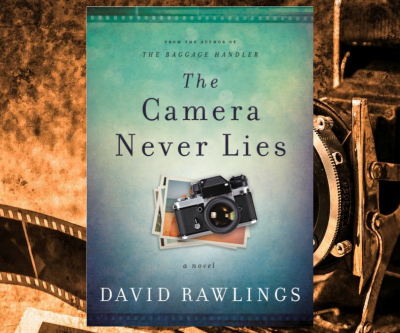 Our protagonist is therapist and best-selling author Daniel Whitley. A father, boss and husband, you can’t help but feel he represents all of humanity. And after bringing a flagging counselling practice back from the edge of bankruptcy since the release of his book ‘No Secrets’, everything appears to be perfect in his life.

But, of course, this is not the case. And after receiving a magical (yes, magical) camera from his deceased grandfather, he realises he can no longer hide from the truth. As the shopkeeper develops Daniel’s ancient film, he is confronted with the truth about his failing marriage, his suicidal daughter and the cause of all his success.

The fantastical elements of this novel make the darkness of it bearable, mainly because the issues are so real to life. Infidelity, lust and lies are all on display, but we learn that honesty, loyalty and truth can also be doled out in equal measure.

As a fictitious book, this is a riveting and enjoyable read. But to truly embrace the message that Rawlings is trying to communicate, you need to read this with some discomfort. After all, we all rely on Christ to bring our immorality out of hiding so our hearts can be sanctified each day. This is just a clever depiction of what sanctification looks like – albeit with a little bit of magic involved.

Available from Koorong, Amazon and all major booksellers.