You are here: Home › Reviews › Book Review The Quarterly Essay By Erik Jensen Australian Prime Minister Scott Morrison is the subject of the latest issue of the Quarterly Essay.

In the latest instalment of the Quarterly Essay, author and journalist Erik Jensen takes us behind the scenes of the last Federal Election, claiming to explore how religion played a role in Scott Morrison’s success.

Given the religious component of the election played a significant role in how Salvationists responded to both Morrison and Shorten, this issue of the Quarterly Essay looked set to uncover truths many Salvos have discussed over the past two years. 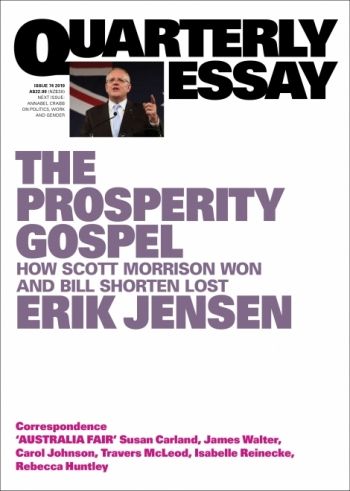 Erik is a talented writer and astute observer who travelled with the press corps during the last election, interviewing Bill Shorten and staff members of the Leader of the Opposition and the Prime Minister.

Notably, ‘Scott Morrison refused to be interviewed for this piece’. That’s where the essay fails to achieve its subtitled goal, to explain the outcome of the election, and to justify its title by more fulsomely addressing ‘the prosperity gospel’.

While there’s some evidence offered to show why people elected Morrison and rejected Shorten, scant attention is paid to the two politicians’ theology and worldviews.

Shorten opened up and Jensen vivisected him. Morrison hid, successfully evading the writer’s quest for understanding and ammunition.

Politics is war with symbolic bloodshed; it encourages reputational rather than physical violence. This essay paints an accurate, bleak picture of the deplorable state of discourse in Australian politics. Strong language and themes abound.

The Quarterly Essay ed. 74: The Prosperity Gospel - How Scott Morrison won and Bill Shorten lost is available from select bookstores and online at quarterlyessay.com.au.