You are here: Home › Reviews › Fantastic Beasts Fantastic Heroes And The Secrets We Keep

Fantastic beasts, fantastic heroes, and the secrets we keep Fantastic beasts, fantastic heroes, and the secrets we keep

In the third Fantastic Beasts film, set in the late 1920s, Jude Law (centre) plays an ageing Albus Dumbledore, the only wizard who can defeat the evil Gellert Grindewald. Photo: Warner Bros.

As school holiday goers flock to the blockbuster Fantastic Beasts: The Secrets of Dumbledore, one question has driven us back to the cinemas – is Albus Dumbledore really a hero? He is, after all, the one who arguably (spoiler alert) sets Harry Potter up to die in the beloved series of the same name. 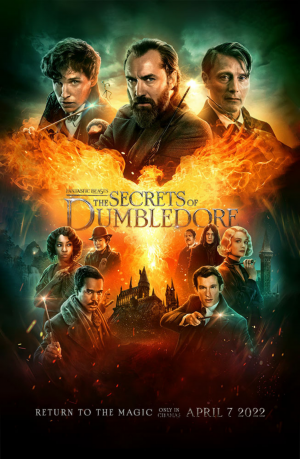 The Secrets of Dumbledore is the third film in the Fantastic Beasts and Where to Find Them franchise – a subset of the Harry Potter series for those who aren’t ‘Potterheads’. And this film takes place before the adventure of the teen wizard and his friends.

Like all the Fantastic Beasts films, this instalment gives us a snapshot of the late 1920s. The world is on the edge of impending hope or perilous destruction – a smart historical timestamp created by Scottish author J.K. Rowling, who has cleverly embedded the Wizarding World of Harry Potter into people’s lives across the globe.

And I would know – the proud owner of a scarf that identifies with the fictional school of Hogwarts, I once wore it unironically while hiking the Grand Canyon, only to hear a fellow tourist yell out “Gryffindor”, like the Sorting Hat. It brought me immense joy, such is the power of the narrative that Rowling has penned.

But I digress. In the latest film, we meet a Dumbledore in his mid-40s. His beard is starting to lengthen and grey, and he spends his time as a professor at Hogwarts School of Witchcraft and Wizardry – the same school he would go on to become principal of during Harry Potter’s tenure. Meanwhile, his wizard nemesis Gellert Grindelwald is determined to stage a revolution and eradicate all non-magic humans.

It is universally understood that only Dumbledore can defeat this dark wizard, such is his esteem as a hero. But there’s a problem – or a secret – that delays the inevitable. Dumbledore and Grindelwald were lovers when they were younger, and they sealed this bond in a Blood Pact. It means neither can harm the other.

Years later, this bond still runs deep – but their decision to part ways over Grindelwald’s depraved ideals was a dealbreaker. In the opening scene, no sooner has Dumbledore admitted to formerly loving his nemesis than Grindelwald declares, “With or without you, I’ll burn down the world.”

So can Dumbledore destroy the Blood Pact and kill Grindelwald – and will he? And does that make him a hero?

The origins of a hero

Years of storytelling inform us that our heroes and villains are clearly defined. The hero is always grand and noble – making loud proclamations and winning love at the end of the day. But this is not always the case in real life or fiction.

In World War Two, the world celebrated Winton Churchill for leading his country through war, but few knew of Dietrich Bonhoeffer, the German pastor who was martyred for his attempt to stop Hitler just weeks before the war ended.

While Dumbledore is celebrated as the film’s hero, bumbling Magizoologist Newt Scamander (Eddie Redmayne) is the grounding moral force, reminding us that our actions determine our morality rather than our reputation. Photo: Warner Bros.

In the same way, perhaps Dumbeldore isn’t the only hero in this story. Perhaps his secret is that he is not innately good or purely evil – he is the sum of his next decision.

Lesser celebrated characters like Newt Scamander deserve the same accolades as the one-day principal of Hogwarts. It was Scamander who risked his life, awkwardly bumbling along with his animal expertise to unite a group of wizards under Dumbeldore’s leadership. And you could even consider Queenie – the frivolous and whimsical witch, who at the end of the last film chose to follow Grindelwald with the promise that she could marry her non-magical fiancé. Her actions in The Secrets of Dumbledore as she tries to break out of an abusive relationship surely mark her as a hero – someone who is willing to try and try again.

Ultimately, that is the heartbeat of The Secrets of Dumbledore, and indeed multitudes of stories about people with extraordinary powers. It is what we do next that matters. We can’t change the past – we and those around us must live with the consequences. We see this viscerally in the character of Credence Clearwater – the orphaned wizard tortured by pain due to a lifetime of rejection. But there is still grace for each of us to make the next best decision. As Newt Scamander, the real hero of this story, says, “That’s what matters, trying”. 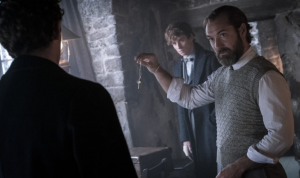 Dumbledore lives with the consequences of his past decisions and must decide whether to destroy his Blood Pact with Gellert Grindewald. Photo: Warner Bros.

The beauty of grace

In the book of Hebrews, Paul lauds us to “throw off everything that hinders and the sin that so easily entangles. And let us run with perseverance the race marked out for us” (Hebrews chapter 12 verse 1).

A hero – or a good human – is the one who tries and tries again for the good of others. And where we inevitably fall short. God’s grace, shown through Jesus, gives us another chance. Let that be the lesson of the Secrets of Dumbledore. No matter who we are or what we have done, we must keep trying to do what is right. That is the beauty of grace.

The Secrets of Dumbledore is rated M for moderate impact themes and violence. It is showing now at cinemas across the country.