You are here: Home › Reviews › Fly Away Thor Ms Marvel Is Here BOOM! POW! CRACK! When it comes to the latest instalment of the Thor franchise, Marvel pulls out one of their most camp and comedic releases to date. Pushing back on the trauma and tragedy of years past, Chris Hemsworth returns as the God of Thunder to reclaim his throne as the superhero the universe needs. But does the world really need another bedazzled, aged, male Anglo-Saxon superhero? If the nuance of Love and Thunder is anything to go by, maybe – so long as there is an equally powered female hero by his side. And with the return of Jane Foster (Natalie Portman) as Lady Thor, we see Marvel remedy the gender inequality of their early days. But if you dare to take a superhuman-sized leap back from the screen, we see something larger at play.

Superheroes of the world, make way for MS. MARVEL. A series released on streaming service Disney Plus a month before Thor: Love and Thunder hit theatres, this everyday hero is a trailblazer. Why? For one, the character of Kamala Khan (Iman Vellani) – her alter ego being a 16-year-old girl from Jersey City in North America. A first-generation Pakistani-American, she is Muslim and, according to comic book canon, queer. In her own words, “it’s not really the brown girls from Jersey City who save the world.”

A god and an immigrant 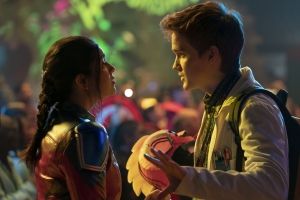 The fact is, Ms. Marvel hasn’t been blessed with a genetic mutation from a spider or technology, and she certainly wasn’t born on another planet like Thor. Her power comes from her heritage – and as we find out, events intrinsically linked to the Indian Partition, when millions of Muslim refugees fled a now-Independent India in 1947 and formed the nation of Pakistan. Today, this is known as one of the largest refugee crises in history, with an estimated 10-20 million people displaced and one million people killed.

Comparing Thor to Ms. Marvel is like comparing apples to oranges. You can’t discredit the trauma and grief experienced by Thor – he has lost everyone he loves, watched his planet Asgard destroyed, seen half the remaining survivors decimated and struggled with deep depression and addiction. The complexity of this pain is well played out on screen, giving depth to an otherwise egotistical and brawny character. But while we see a shadow of real-world events in the life of the Norsk God, they don’t hold a candle to the reality of a 16-year-old American-Pakistani immigrant who still lives with the generational trauma of colonisation and Islamophobia that haunts her people to this day.

Sure, Thor can kill bad guys with a hammer. But Ms. Marvel can protect her community, albeit awkwardly, with a strength and dignity that comes from within. She is the picture of a young Generation Z [people born between 1996-2009], who are more technologically inclined and culturally aware than ever. Her enemies are not power-hungry aliens – they are corrupt law enforcement officials who identify her as a threat due to her ethnicity. Her friends are diverse, articulate and strong – a feminist devoted to the Muslim faith and restoring gender equality to her local Mosque, and an orphaned tech wiz who happily partakes in her family’s Indian feasts and religious events upon invitation.

A new age of heroes 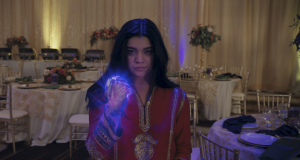 Historically, superheroes were created during World War Two to give people hope. Superman and Captain America were icons of nationalism and represented the brave men fighting for freedom. Post 9/11, we returned to this preference and relied on billionaires like Tony Stark’s Iron Man and ex-Communist spies like Black Widow to save us from unknown evils.

But in 2022, in a world where gun violence, racism, inequality, the loss of human rights and environmental disasters are happening by humanity’s own hand, Generation Z have become the superheroes we so often persecute or misunderstand. They are what we would deem misfits – diverse in background, gender, sexuality, skills and interests. Yet they are the ones who give us the most hope. And if you stay to the end of Thor: Love and Thunder, you learn that Thor has realised the same truth.

In 1 Timothy 4:12, Paul asserts, “Do not let anyone look down on you because you are young.” It is a verse we lobby as teenagers, and Spirit-filled, we stepped into adulthood on a mission to save the world. Now we are the adults who have to make may for the young. Their ways may be unusual, new and sometimes imperfect – but their passion for doing good is the very thing God will use to build his church post-COVID-19. How’s that for a thunderbolt?

Thor: Love and Thunder is rated M for fantasy themes and action violence. It is out now at cinemas.

Ms. Marvel is rated M for language and action sequences. It is streaming on Disney Plus.

JESSICA MORRIS IS A STAFF WRITER FOR OTHERS MAGAZINE