As our culture continues to define itself apart from God, it’s not surprising that the once-familiar story of “The Prodigal Son” would drift out of public consciousness.

This month, though, a film release will seek to put Jesus’ famous story of exceptional mercy back on front-stage. The only difference is that the filmmakers arrive at the opposite view of God. Sometimes, Always, Never is the story of a British tailor who has lost his son.

Bill Nighy plays Alan, a stylish widower who raised two children after his wife’s death. Alan and his boys, Michael and Peter, shared a family obsession with Scrabble as they rebuilt their lives without mum. However, somewhere back in that unexamined past, Michael stormed out during a contentious game and never returned. 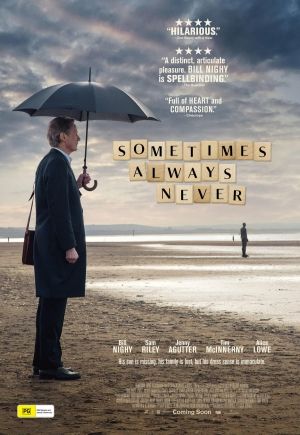 The film picks up this family’s story years later. Alan is an elderly widower, and Peter is married with his own son, Jack. Peter, the “son who stayed”, is doing well and patiently endures his father’s quirks. But it’s clear Alan has never gotten over Michael’s departure, and longs for him in a way that leaves Peter out in the cold.

The parallels between Sometimes, Always, Never and Jesus’ parable are deliberate and revealing. The film also regularly refers to the missing “Uncle Michael” as the prodigal, and references the story in the middle of a Scrabble game. However, its telling generates nothing like the sympathy Jesus intended. The prodigal Michael is portrayed as someone not bothered enough to contact his father.

Whereas, Sometimes, Always, Never casts the reliable Peter, the son who stayed, in a completely new light – someone who never enjoyed the love he deserved. His deepest sadness is saved for the way his father has chosen the memory of his missing boy over the son who stayed faithful.

In Jesus’ original story, the father stood for God, the prodigal son as sinners who have run away from him, and the brother who stayed as the judgmental Pharisees, who are critiqued for resenting God’s love. In Sometimes, Always, Never, though, it’s the God figure who comes under fire. Alan’s concern for the son who behaved badly is pictured as short-sighted. Instead, he should have spent more time loving those who deserved it.

It’s hard not to see this conclusion as what C.S. Lewis referred to as modern humanity’s desire to place God on trial: “The ancient man approached God (or even the gods) as the accused person approaches his judge. For the modern man, the roles are quite reversed. He is the judge: God is in the dock.” (C.S. Lewis, God in the Dock: Essays on Theology and Ethics.)

But in setting up their story, the writers of Sometimes, Always, Never entirely miss the point of Jesus’ parable. It’s not that Jesus’ father reserved his love for the prodigal child and showed none to his faithful son. It’s that he – God – possesses enduring and unrelenting love for both. And Jesus reminds his listeners that anyone returning to him is cause for celebration: “‘My son’, the father said, ‘you are always with me, and everything I have is yours.

But we had to celebrate and be glad, because this brother of yours was dead and is alive again; he was lost and is found’” (Luke 15:31-32). In Jesus’ story, both sons needed to repent: the younger for his selfishness, the older for his self-righteousness. However, in Sometimes, Always, Never’s world, where blame and pain rule the brothers’ lives, there will never be any returning or reconciliation.