You are here: Home › Reviews › Movie Review The Batman Robert Pattinson (centre) stars as Batman in the latest movie version of the comic-book superhero character.

That is how Batman introduces himself in the latest iteration of this iconic comic-book character played by Robert Pattinson and directed by Matt Reeve. Are Batman and Catwoman lovers or enemies? The answer is elusive in The Batman, with some critics saying the character of Catwoman is over-sexualised.

The Batman is not your typical superhero movie – it is closer to a modern noir detective murder mystery. This story revolves around the Riddler, a serial killer who murders key political figures in the city of Gotham. Batman, together with (not-yet Commissioner) Jim Gordon, try to solve the clues and puzzles that the Riddler leaves behind. The plotline has a heavy Se7en (1995) vibe – which I love. Here is a spoiler-free review of the film, followed by a spoiler-heavy deep dive of this compelling story.

While most of the movie is shot in the dark with only some basic colours, the cinematography is excellent. The movie embraces the dark not only as a plot tool, but it becomes the character itself. You can see some of the influence of Tim Burton’s Batman (1989) here.

The villains were also excellently portrayed. After all, a story is only as good as the villains that Batman must face! You might think that this movie is too crowded with the Riddler, the Penguin, and Catwoman (Zoe Kravitz). However, I appreciated how their character development never felt rushed, and each could tell their own story. Colin Farrell as the Penguin and Paul Dano as The Riddler were particularly excellent! 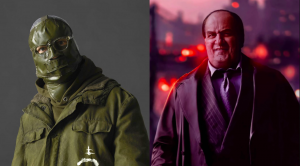 Paul Dano (left) seamlessly transforms into Batman villain the Riddler, while Colin Farrell is unrecognisable as the Penguin.

It is also worth noting that I loved this iteration of Batman played by Robert Pattinson. I have seen many Batman films in my lifetime. The best is not the one battling villains, but the one battling their inner-self. While this Batman is not as fleshed out as Christopher Nolan’s Batman in The Dark Night Trilogy (2005–2008), I can see the inner-battle of Bruce Wayne/Batman dynamic, which contrasts with earlier versions.

This movie is three hours long, so go easy on the drinks because you’ll have to leave the cinema and miss crucial scenes! The last act feels like a drag because I was already tired by then, and I kept having the sense of this-must-be-the-end when low and behold ... Batman swoops in again.

This Batman started as ‘Vengeance’. In fact, you hear people call him by that name more than ‘Batman’ in this film! But throughout the movie, we see that Batman is asking if what he is doing is bringing positive change. In the two years he has become the Batman, crimes are rising, and more people have been murdered. In fact, the Riddler was inspired by what Batman is doing. This shows that while trying to fix Gotham’s problem with vengeance, Batman actually created an even bigger problem. He uses fear to save Gotham, and the Riddler uses fear to uncover and destroy it.

Ultimately, Batman realises that he needs to be more than vengeance – he needs to become a beacon of hope. This is visually represented when he reaches out to the people trapped under the stage. While everyone does not trust him, the little boy (the son of the Riddler’s first victim) grabs his hand first, then everyone follows. This is also an image of redemption for the newly orphaned boy and a full-circle moment as both Bruce Wayne and the Riddler were orphaned. By reaching out, Batman is reconciling with his past while giving a positive future to this boy. In doing so, Batman learns that “Vengeance won’t change the past.”

A move from the darkness to light

“They think I am hiding in the shadows. Watching. Waiting to strike, but I am the shadows.” – Batman In The Batman, we see Gotham City policeman Jim Gordan (left, played by Jeffrey Wright) collaborate with Batman, ultimately becoming the moral stalwarts of the city and paving the way for future iterations of the franchise.

This is a dark movie, and most scenes were shot at night or in the dark. At one stage, Bruce Wayne, Batman’s alter ego, has to squint his eyes when Alfred has the window open. He is not used to light because he is the shadow.

However, the last scene is a stark contrast to the rest of the movie. The movie ends with a sunrise – visualising the rise of Batman from darkness to light – from vengeance to hope. We also see the city being rebuilt. The rebuilding happens not only in the city but also in Batman's character. Knowing that fear and vengeance can never save the city, he needs to be something else. Gordon's bat symbol to call Batman has transformed from a warning to the criminals to become a beacon of hope. This shows that if we are willing to work through our pain – and let God heal us – we are capable of things far greater and more profound than the fear that once inhibited us.

As Batman says, “Our scars can destroy us, even after the physical wounds have healed. But if we survive them, they can transform us. They can give us the power to endure and the strength to fight.”

The Batman is rated M for moderate impact themes, violence and language, and mild impact drugs and sex scenes. Screening now at cinemas.

TANWIN TANOTO IS A MINISTER AT HURSTVILLE CHURCH OF CHRIST IN NSW.