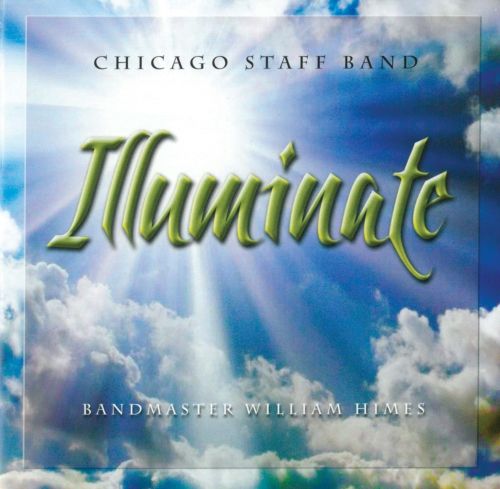 The Chicago Staff Band’s Illuminate album is the last recording under the baton of composer and raconteur William Himes, and features four of his well-known works. As someone who continues to teach brass learners and lead a Bible study at his corps in Oakbrook Terrace Corps, Chicago, Bill has contributed much to music and ministry in the Army, including headlining as guest in Melbourne for both the 2015 Composers Symposium, and the 2016 Music and Creative Arts Conference. He will return to Australia in 2017 for the two weeks leading up to, and including Easter, where he will be the guest for the weekend at Brisbane City Temple Corps.

The album jumps right in with The Witness, a march featuring the tune Christ For Me. Himes’ arrangement oozes Chicago jazz chords in what was his first published piece. As an established standard in the repertoire, the band has no trouble in delivering this piece and the message it brings.

Featured at the 2015 Boundless International Congress, Andrew Wainwright’s Illuminate lights the way as the title track of this album. Not only a fine euphonium player in the band, Wainwright’s compositional signatures are evident in the piece, with driving ostinatos and strong chording work giving both drive and depth to this challenging piece. Through the seven and a half minutes of sparkle, Shine On Us, popularised by Michael W. Smith, Keith Getty and Stuart Townsend’s Speak, O Lord, and General Evangeline Booth’s The World for God are also featured.

Gerald Shoults’ arrangement of Glorify Thy Name is a beautiful and engaging version of the piece, and is performed in the style and spirit that allows for a true reflection of the lyrics. Shaun Thomas does a fine job tackling Norman Bearcroft’s The Better World. This piece features some classic Army repertoire including There’s A Better World, There’s a Crown Laid Up in Glory, Saved By Grace, and Arthur Arnott’s The Homeward Trail.

The CSB Chorus continues the theme of light with This Little Light in excellent four-part harmony. Arranged by Richard Philips and adapted by Himes, this bright arrangement should certainly bring a smile to your dial. We continue with our North American writers enjoying Stephen Bulla’s new General Series arrangement Lift Up Your Voice. This punchy piece certainly gets you up and moving.

No stranger to soloing with the band, Beth Cooper brings the joy in her excellent rendition of Himes’ Caprice For Cornet. With a bubbly and energetic start, you can hear the Sunday school song I’ve Got The Joy, Joy, Joy, Joy Down In My Heart, followed by a slow blues variation sitting so very comfortably with the Chicago-based band. The build to the end is a wonderful journey and is an achievement for both band and soloist.

Crossing the Atlantic, we are treated to Fusion, the second piece in Martin Cordner’s Eternity trilogy. Starting in the darkness of sin, we break free moving from “earth to heaven” quoting General Albert Osborn’s I Know Thee Who Thou Art. The band certainly observes the rehearsal notes marked as vivace or lively. I particularly enjoyed the flugel feature section, and blindingly bright trombones at the end.

Staying in the UK, you simply cannot go past Kenneth Downie for beautifully constructed hymn settings, and Coming Home! is certainly no exception. The ever-raucous Él Es El Señor is every bit as fiery and exciting as you would hear in any Latin American congregation. Brett Tolcher slides into his blues swing suit in Alan Fernie’s Swing Low, which even includes some cute low registersections, as well a short duet with the Eb bass and excellent small ensemble work. The style suits the band down to the ground and is one worth going back to time and again. Harlequin is as crazy as the court jesters from which the piece’s name derives. The quirkiness of these comic servant characters are masterfully portrayed by the band reflecting the ideas and nuances from the film score styling which writer Bruce Broughton brings to the table.

Taking a moment to reflect, the CSB Chorus brings the petition Come, Peace of God. This moving piece speaks more than the lyric, with the emotion felt in the power of this rendition. We complete the disc with a fugue perhaps not quite how J.S Bach would have imagined it, but certainly well presented. Himes takes Bach’s famous G minor Fugue The “Little” Fugue and transforms it into a brass setting in The Big Little Fugue. Overall, Illuminate is an album worth looking into and is a great way to enjoy on any road trip, quiet Sunday afternoon or preparation for your next rehearsal.

Illuminate can be purchased for $25 at Salvationist Supplies. Go to thetrade.salvos.org.au