You are here: Home › Reviews › Music Review My Journey By Derick Kane To mark the occasion and his extensive years of ministry, the ISB has released a compilation of Derick Kane’s music through the years.

After more than 40 years ministry as a member of the International Staff Band, solo euphonium player Derick Kane is set to retire, although we suspect that Derick will not be hanging up the euphonium any time soon. 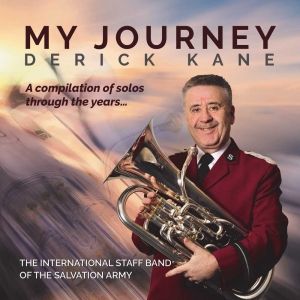 To mark the occasion and his extensive years of ministry, the ISB has released a compilation of his music through the years; the earliest was A Joy Untold by Terry Camsey, recorded in 1980 and even performed by Derick at Disneyland.

The latest is Derick’s own arrangement of the John Larsson melody, ‘That’s the Spirit!’

The CD contains a carefully selected number of tracks chosen by Derick himself, quite a task. Derick writes; “I was amazed to discover that I had 50 or more titles recorded with the ISB ... so the challenge of choosing a few for a compilation was indeed daunting.” The selection is most pleasing, containing tracks that will suit the brass band enthusiast and well those looking simply for soul food.

A well-presented libretto is included with the album in which Derick pays tribute to those who encouraged him in his music ministry, including Bandmaster Ray Bowes, who gave him a start, as well as the various bandmasters of the ISB under whom he has played.

Tracks such as ‘The Song of the Brother’, ‘We’ll all Shout Hallelujah!’ will be familiar with the brass band purists. However, tracks such as Annie Laurie (associated with the words ‘The Dearest Name to Me’) will provide soul food. My personal pick is Richard Phillips’ arrangement of the Keith Getty & Stuart Townend song ‘In Christ Alone’.

This album is well worth adding to your collection.