Fifty young Salvos from across the country took part in "3 Bags Unpacked". A modern retelling of The Prodigal's Son, this original musical was written, scored, performed and filmed by the Worship Arts team across Australia.

In 3 Bags Unpacked, the Worship Arts team from across Australia stretch themselves to create a unified art piece that transcends location.

Like Salvation Army musicals of the 70s and 80s, this gem celebrates the plethora of talent in our Salvo ranks and highlights the fortitude and commitment of 50 young adults from across the country – who all contributed to this experiment virtually. 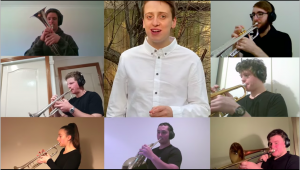 Lead actor Jackson Smith commands the story, and is supported by the talented orchestra.

That’s right. From the script and musical score, to the performances, dancing and hours of editing, this musical was created nearly entirely virtually. Yet instead of hindering the story, it actually strengthens it. And, in this film,  we see one of the best expressions of a unified Army since Australia One,  as characters transcend the camera and establish relationships beyond one shot.

3 Bags Unpacked is a modern-day retelling of the Prodigal Son in Luke 11:15-22. The screen play was written by Julia Roper and directed by Ken Waterworth. Together they cleverly pull on the key themes of pride and forgiveness while deconstructing the traditional gender roles of each protagonist.

Our smaralec prodigal PJ (Jackson Smith) steps into the shoes of the lead with gusto, developing from narcissist and self-indulgent teen to a young man willing to work hard and ask for forgiveness. He’s also an excellent dancer.

In place of the prodigal’s father, we have a mother Paula (Isobel Holland), who provides a calm and stabilising voice through the film. As the owner of the family business, she epitomises God’s heart for us. Her duet with Smith in “Epiphany” is a high point, emphasising how the team created an emotional connection that overcomes location.

The prodigal’s brother is actually a sister named Ellie – and a married, working woman at that (Catherine Booth would be proud). Played by Felicity Adams, she grapples with her own worth when her hard work seems to go unnoticed once her brother returns home.

And there are two more leads to help the story flow.They are; Matt (Jacob Bulow), Ellie's husband who invites her to exercise forgiveness and the pivotal Toni (Lauren Jeitani), who gives the prodigal a second chance and empowers him to return home.

Through the entire musical, we see (and hear!) the rest of the cast, orchestra, the chorus, dancers and the extras who stepped up and recorded their parts at home. And the media team of Will Searle, Dean Casey, Britteny Ling and Carlene Butardo have done an incredible job at following storyboards, synchronising audio and cutting together scenes (often in multiple shots) to make it a heart-warming and often funny story. 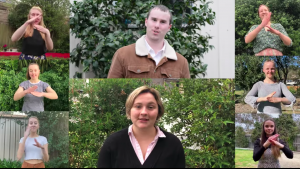 The musical closes with the entire cast singing an signing in Auslan. Pictured here is Jacob Bulow (top) and Isobel Holland (bottom), surrounded by members of the Chorus.

Of course, you can’t have a Salvo musical without a few toe-tapping music (if these are songs that are sung I would replace music with song) and dance numbers, and we are given three in 3 Bags Unpacked. The first My Time led by Jackson King is so well done. Not just because King fully inhabits the song and the orchestra are on point, but because the entire team have put together a complex, entertaining and media rich presentation that would have taken hours to finish.

The finishing track, Lost Till You Found Me is the ultimate closing song. And the cast and orchestra go all out singing, dancing, doing Auslan and basically just giving your spirit a virtual hug.

Whether you resonate as the prodigal, his mother, or his sister, 3 Bags Unpacked is a reminder that we each have a role to play in someone’s story. And by giving someone a go, exercising forgiveness, or celebrating their return, we can reflect the heart of Christ.