You are here: Home › Reviews › The Shack 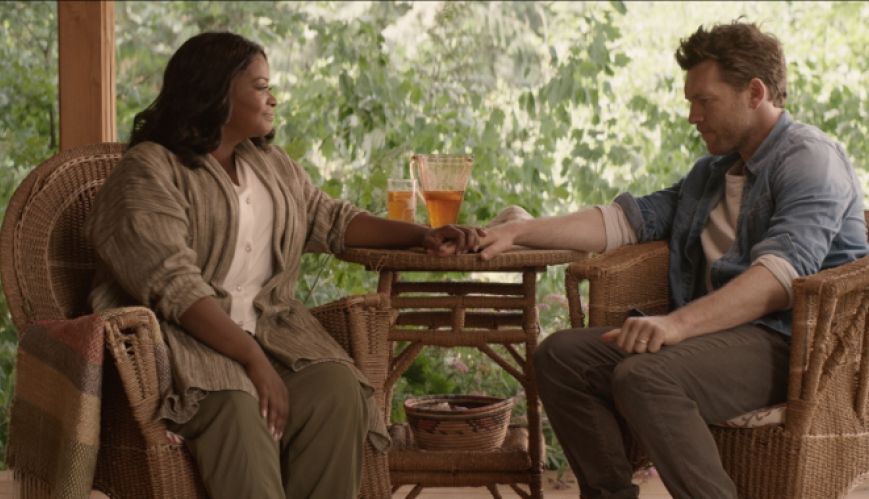 Mack, played by Sam Worthington has a spiritual encounter with "Papa" (Octavia Spencer) in The Shack.

The Shack, by any metric, is one of the new millennium’s most successful Christian books.

It’s sold 10 million copies since its publication in 2007, spent 70 weeks at number one on the New York Times bestseller list, and been celebrated by Christian luminaries like Eugene Peterson and Michael W. Smith.

But at the same time, it has received widespread condemnation from other leading Christians like Chuck Colson, Albert Mohler and Mark Driscoll.

Is it any surprise the film version, releasing this month, is just as controversial?

Sam Worthington stars as Mack Phillips, an everyman with a loving wife and three children, including a precocious younger daughter called Missy.

He occupies a pew at church and has a nodding relationship with spiritual things. Everything seems idyllic until a family camping trip takes Mack to the verge of mental collapse. Mack’s youngest goes missing.

Every parent’s nightmare follows, involving police search parties and a heart-stopping revelation by the FBI that Missy may be the latest victim of a child serial killer.

When her bloody dress is discovered in a rundown shack, Mack’s happy life comes to an end.

In the ensuing years, Mack withdraws into himself as Missy’s murder sinks in.

Until one day, Worthington’s character receives a note from “Papa” inviting him to return to that horrifying hovel for a reunion.

Papa is the name Mack’s wife uses for God, and what follows is a spiritual encounter that surpasses anything seen on the big screen.

The Trinity has gathered at the shack to help Mack find a way through his grief. Portrayals of God in film are always fraught with danger – how can anything so finite contain the infinite? – but The Shack scores well above more recent portrayals for its readiness to tackle the big questions.

In just over two hours it considers the presence of pain, the nature of forgiveness, the necessity of trusting God and, of course, why God allows bad things to happen to good people.

The Shack is an allegory for suffering humanity’s struggle with God, and as such it was always going to do some things well at the expense of others.

On the positive side of the ledger the film leaves its viewers in no doubt that God remains sovereign in the worst situations, never abandons those who love him, and can bring, “... incredible good out of unspeakable tragedies”.

Yet, in its determination to reveal a personal, approachable “Papa”, The Shack abandons any concept of a holy Creator or a divine Lord. Papa is often glib and more than a bit sappy.

Worst of all, the film drives a deep wedge between God and his Word. This, in short, is The Shack's biggest problem.

The Bible’s revelation of who God is, is constantly sidelined in favour of who we need him to be – from an all-embracing black woman to a mysterious oriental.

It takes an evangelical faith and replaces it with a mystical belief, in which our personal perceptions ride roughshod over God’s self revelation.

When it comes to God, feelings and experiences can be good guides, but they are bad masters.

The Shack can be safely entered by those who seek a reminder that the Father’s love is never in question, but it’s not a place to find a full picture of God.

That resides in the Bible.

The Shack is rated PG and opens in cinemas today.