You are here: Home › Reviews › Tv Series Review Christians Like Us 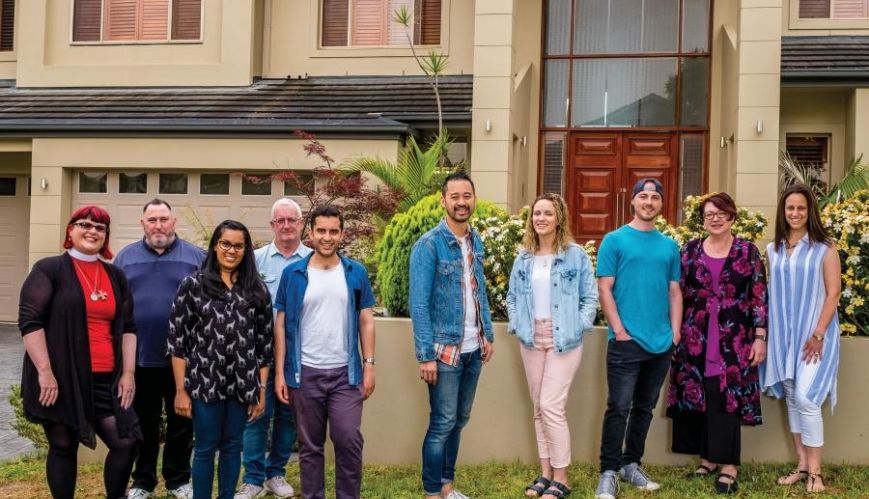 The cast of SBS’s two-part documentary series, Christians Like Us.

“Christianity in Australia is in crisis ... rocked by sex scandals ... dogged by internal battles ... struggling against the tide of public opinion ... and battling to get bums on seats.”

The hype is undeniable, the cynicism palpable – and both tell you the first thing you really need to know about Christians Like Us. 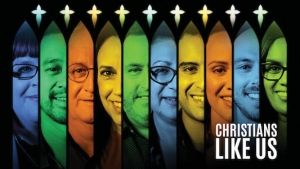 Despite the title, this two-part documentary series is produced by a mainstream media company working from a secular viewpoint.

The question is, despite its slanted framework, has it captured a fair picture of Jesus’ Australian followers? Christians Like Us employs a tried-and-tested formula. Ten people from various Christian standpoints are asked to spend a week living together in close quarters, confronting their sharp differences in opinion.

As the narrator summarises, “They all believe in God, but that might be the only thing they agree on.” As strong views clash, passionate claims surface and emotions boil over, we the audience are asked to judge whether there’s any validity in the faith they hold.

Christians Like Us is the creation of Australian production house CJZ, and the follow-up to the similarly structured Muslims Like Us. CJZ’s Head of Factual is Andrew Farrell, whose credits include Big Brother and My Restaurant Rules, and not surprisingly, the show’s structure has much in common with reality TV.

Christians Like Us is edited for maximum contrast. Video crews constantly probe into personal moments, the participants make personal ‘confessions’ to camera, and the narration consistently divides the cast into two groups emotively described as ‘Conservatives’ and ‘Progressives’.

Conflict is the show’s guiding light. The producers haven’t attempted to represent the balance of Christianity in Australia today, so much as the variety of positions it apparently embraces.

The house is stocked with polar opposites: a pastor who believes in the Bible’s teaching on sexuality, and an openly gay man; a female priest, and young woman who embraces male leadership; a Catholic teacher who encourages guilt-free sex, and a Coptic Orthodox man saving himself for marriage.

The decision to include a man abused by an Anglican priest does give rise to deeply sympathetic scenes, but it’s also symptomatic of CJZ’s attempt to mine the show for emotional pay-offs instead of serious discussion.

Religious consultants were involved, however, this hasn’t prevented the show from making some glaring errors concerning Christian beliefs, including the basis for their salvation: “For most Christians, entry to heaven is the ultimate reward for a virtuous life on Earth.”

The cross, it seems, is merely a decoration, and the Jesus who died on it to save people rarely gets a mention. Instead, Christians Like Us focuses its attention on his earthly representatives, summarised under the catch-all phrase ‘the Church’.

And it’s at this point the show lands its most accurate blows. All of the participants agree that Jesus’ followers could have done much better displaying his love to its members and the marginalised. Chris, the gay man, says he still ‘loves Jesus’ but believes the treatment Christians have meted out to the homosexual community make persecution claims ring hollow.

Steve, the man abused as a child, believes the Church is largely reaping what it has sown: “This is where the church has failed for 40, 50, 60, 70 years ... Because they cover this stuff up and refuse to accept the consequence of it. And they’ve destroyed themselves in the process.”

These are only two of the things that Christians Like Us rightly calls believers to repent of. The list expands to include using the Bible as a cudgel, passing off scare tactics as evangelism, and probably most sadly, failing to speak the truth in love.

Evangelist Steve Chong, also a housemate, admits most believers fail to combine Jesus’ confronting message with his undeniable compassion: “We’ve lost the art of being able to disagree and do so while being entirely loving.” Yet, the greatest failure of communication probably rests in the show’s title.

For Christians Like Us, the term ‘Christian’ is an extremely loose term. It stretches to cover those who trust in the sacrifice of Jesus, to those who say they can’t believe in God. “I do think it’s a little hypocritical for anyone to put a label on what Christianity looks like,” says Mormon, Hanna, “because every Christian faith is different”.

In Christians Like Us, that faith includes those who see the Bible as God’s roadmap to salvation and those who see it as emotional stories not meant to be taken literally. “I don’t believe in Hell,” explains Chris. “The idea that people die and sizzle forever in a frying pan is just not biblical to me.”

Most of all, a Christian is not constrained by a set of teachings, but is primarily responsible to the calling of their heart. “People can believe whatever they want to believe,” says Anglican priest Tiffany, “but those beliefs can’t impact negatively on other people.”

Is it any wonder, then, with such confusion in the ranks, that the producer’s working definition for Christian seems to be, ‘Anyone who wants to call themselves one’? No doubt that sits well with an audience who believe that even definitions as fundamental as ethnicity and gender are subject to whatever you feel to be true.

But can a follower of Jesus really be so personally defined? What, in fact, would Jesus say? “Whoever wants to be my disciple must deny themselves and take up their cross daily and follow me” (Luke 9:23). “Not everyone who says to me, ‘Lord, Lord,’ will enter the kingdom of heaven, but only the one who does the will of my Father who is in heaven” (Matthew 7:21). “I am the way, the truth and the life. No one comes to the Father except by me” (John 14:6).

His definitions aren’t hard to find, and I don’t doubt they’d provide all the conflict the producers require – just none of the comfort. Yet, they would supply the warning, challenge and certainty we so desperately need.

Christians Like Us is rated M and is available on SBS on Demand.