You are here: Home › Salvation Stories › Becoming Who God Made Me To Be

Becoming who God made me to be Becoming who God made me to be

Di Stockill and her pet cat ... “acceptance is a big deal to me”.

I’ve been asked a few times what becoming a soldier of The Salvation Army means to me. I share with you my answer.

Being a soldier is showing other people that I am excited to be a part of the Army. I agree with its doctrines and I love how Salvationists show God’s love to people in practical ways. It also shows me that the Salvos accept me as one of their own. This acceptance is a big deal to me.

I grew up in a Christian home, going to church every week. I learnt about Jesus and his love. I’ve had a lot of really good friends, as well, but I just never felt like I was really accepted. I didn’t seem to fit in. I thought I needed to try harder or be better or I would never be good enough for anyone.

I was very shy as a kid and I got bullied a lot, too. All in all, I didn’t think very much of myself for a lot of reasons.

When I was 11, my dad became a pastor in the Wesleyan Methodist Church. Being a pastor’s kid, you get to see the best and the worst of churches. I had a lot of really good role models and friends, but I also saw our family and other families treated very badly by some people in the church.

This, combined with my low self-esteem, meant that I often questioned if God really knew what he was doing, especially when it came to me. God doesn’t make mistakes. I knew that but, surely, I must be a mistake. 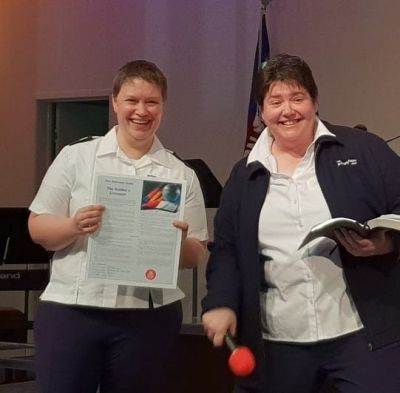 Di Stockill with her Soldier’s Covenant after having been sworn in as a senior soldier by Major Roslyn Brooks on Sunday 26 July.

There were a few people who I thought were my friends who seemed to think that my lack of confidence and acceptance of myself meant that they could fix me to be how they thought I should be. The only way they accepted me was if I was pretending to be what they wanted. This confused me even more and it took me a long time to realise that God and my real friends didn’t need me to be someone else.

I knew in my head that God loved me and that some people did too, but because I didn’t know or like who I was, I couldn’t understand how his love for me could be real.

Even though I had a lot of really good friends, I didn’t feel settled at the church I was going to. Looking back, I know that God knew I needed a change. He also knew how much I resist change so moving from where I was to The Salvation Army was a bit of a process.

My parents had started going to Capricorn Region Corps in Rockhampton just over 12 months before I did. They talked a lot about the corps, how much they liked it there and how much they thought I would like it there too. They knew I didn’t feel settled where I was and they seemed to think they had the answer.

The church I was going to in Yeppoon had two services each Sunday. I found out that the Capricorn Region corps officers also led a service in Yeppoon on Sunday afternoons, right between my other two services.

Now, God made me very curious so I started driving past the Army building around when their services were on. Then, one week, I stopped out the front. The next week, I finally got up the nerve to go in. After that, I barely missed a service. I really started feeling like the Salvos was where God wanted me. Going to the afternoon service didn’t mess with my routine too much so that helped, too.

Once I got to know the officers and quite a few other people there, it was only a matter of time before I made it my home church. True to form, though, it still took about nine months, during which time I met other people from the corps and other Salvation Army corps when I went to the women’s Refresh weekend.

Eventually, though, I gave in, and here I am – enrolled as a soldier at The Salvation Army Capricorn Region Corps.

Within my first few months there, I started volunteering to work in the office. I’m still doing that. I love how much I’ve learnt and how I can see God growing me through that work and the friendships I have here and I look forward to what he will continue to do.

I am a Christian. I am a disciple of Christ. This was already true, but now I can add that I’m a soldier in The Salvation Army. I am so grateful that God brought me here. I’m thankful that he put people in my path who are just as stubborn as me (well, some days I’m thankful for that).

Most days, I enjoy how Jesus is growing me. With God’s help and, with the help of the friends he has put in my life, I’m starting to be able to accept who God made me to be. I’m thankful that he takes me as I am and he never gives up on who I can be with his help.