You are here: Home › Salvation Stories › I Always Thought The Church Looked So Unusually Beautiful

Vikki's story: from Buddhism to Christianity 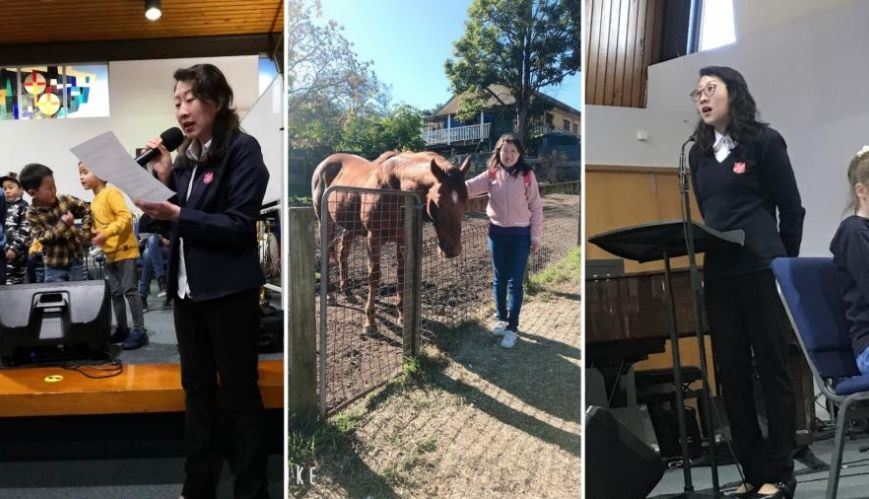 Vikki's story: from Buddhism to Christianity

Vikki Song says she has a ‘better life’ since accepting Jesus. She will begin her role as a cadet-in-appointment at Northside Chatswood Corps in 2021.

I was born in China and came to Australia 15 years ago after finishing university. I was brought up in a Buddhist-believing family. My grandma used to take me to the Buddhist temple for worship when I was young. But God was never very foreign to me.

In my city, there were only two churches. One of them was built in 1898 by a French missionary; it was just outside of my primary school. So, throughout my six years of primary education, I could see the church every day from my classroom window. I always thought the church looked so unusually beautiful.

Another ‘coincidence’ was that our next-door neighbours were Christian. I used to follow them to their church occasionally. So, I learnt a little bit about the story of Jesus’ resurrection, but I was very confused about how it happened. These neighbours also gave me a pendant of a cross with Jesus on it. I have kept it – it is still in my mum’s house in China. When I look back now, I think this experience was a bit unusual for a Chinese person.

Three years ago, I left an unhealthy relationship. I had my nine-month-old son and my mum with me at the time. We had nowhere safe to live, but, fortunately, we were accepted by a women’s refuge. From then on, we started receiving a huge amount of support from different charity organisations. The Salvation Army was one of them. I have no idea how I would have gotten through that difficult time without their support.

The marriage breakdown hit me really hard. Life was really tough for me when I had to go through battles with my ex-husband at the court. I was about to lose my strength and fall apart, and I felt I needed to find some external spiritual support to lean on, to keep me going. I said to myself, “I can’t afford to fall, I have to be strong for my son.” I kept going between churches and the Buddhist temple for a few months. I wasn’t sure which was the right one for me.

At the time, I remember saying to a Christian friend that I felt as if I was choosing another husband – because I wanted something I could fully trust and rely on and not be hurt again. She told me that the Church is the bride and the body of Christ Jesus. The funny thing was during that time, wherever I went, I kept meeting random people who asked me to join their church services.

One day, I had coffee with a friend. I had known her for years but never knew she was a Christian until that day. I told her how grateful I felt because of the support from different charities. I also mentioned that I kept running into people who asked me to go to their churches. She said to me, “All these charities are extended work from God’s spirit of reaching out and helping people. I think God is trying to reach you through his help and these different people.” That moment, I felt like she turned on a light bulb in my head. From then on, I didn’t’ go back to the Buddhist temple again.

Since accepting Jesus, I feel like I have stepped into a new world through a new door. The Bible is so fascinating and intriguing. I keep reading it, but always feel there is more to read about. I started reading it from the first page and I kept trying to finish it to the last page. Glenda [Captain Glenda Brown] took me on for discipleship, and her teaching gave me a deeper understanding of God’s word.

I started volunteering with The Salvation Army because I was really appreciative of how the Army supported my family through that really hard time. I helped to translate sermons and brochures. Two years ago, I sensed a calling to Salvation Army officership.

I feel that God has been changing me gradually in a good way. Knowing I’m forgiven through Jesus, and God is walking with me every day, is very assuring and uplifting. I have learned, and have been practising, not being anxious in any situation, but to pray to God with a thankful heart through Jesus, trusting in God that he will lead me.

Every now and then in the past, I always had thoughts of wanting to be a soldier or a policewoman, and I had no idea where the thoughts came from. I feel so honoured and privileged to have become a soldier of The Salvation Army, and now I have been accepted as a cadet-in-appointment.

It’s just what I was looking for, a strong external power to hold me up, give me hope and lead me to a better life.

As told to Lauren Martin.