You are here: Home › Salvation Stories › I Was Just So Lonely

'I was just so lonely' 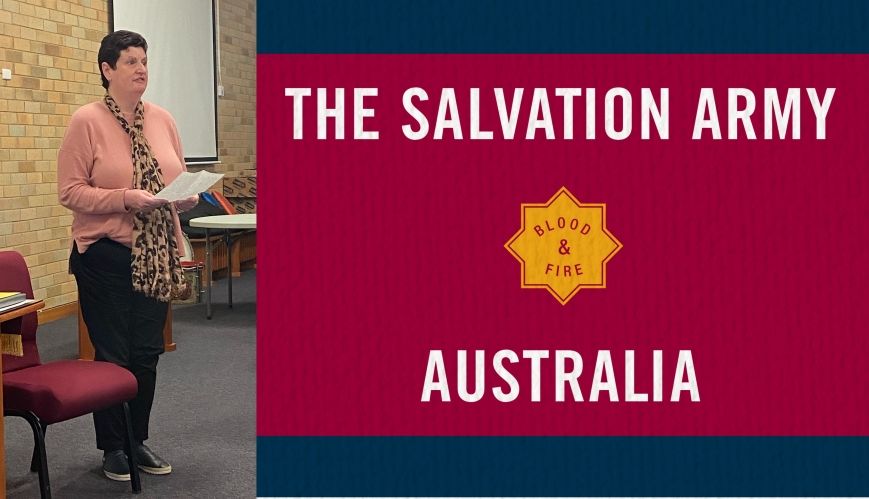 'I was just so lonely'

Jo-Anne Groarke was recently enrolled as an adherent at Goulburn Corps.

A friendship with a Salvation Army soldier at her work led Jo-Anne Groarke into conversations about faith and Jesus. Ten years later, she invited Jesus into her heart and suddenly experienced freedom and belonging.

I work at a psychiatric hospital with Glen Pattrick, who is a soldier at The Salvation Army here in Goulburn. I used to always discuss religion with Glen because I felt comfortable with him. I was brought up in a Catholic family, the youngest of nine children. I believed in Jesus, but I didn’t know him.

I lived with my mum. My mum was my mother, but she was my best friend as well. After my mum died four years ago, I was so lonely. Although I didn’t drink or smoke or play the pokies, through loneliness I would sit in the club with nowhere to go.

[At that time], I was eating myself to death. I was just living on takeaway. I was so unhappy.

Glen and his wife started asking me to dinner. They really encouraged me and they took me under their wing. I feel with Glen and Denise that I’m part of their family. One day they asked if I wanted to go to church with them. When I went – it just felt like I was coming home.

Glen introduced me to the Bible. I had never read a Bible in my life. We used to believe what the priests and nuns told us.

I went to church for the first time in the December and it was in the February of the next year that I became a Christian. I just asked for Jesus to come into my life and then all these things began to change!

My health has improved by my losing 34 kilograms! My finances have changed – I am out of debt. I used to spend up to and above $100 a week ordering in takeaway and then find myself trying to meet my financial needs, taking out pay-day loans. I would also spend money on lotto tickets and was in a lotto club. But since Jesus has come into my life, I no longer do these things.

Now, I’m no longer lonely. I read the Bible every day and pray every day. I love going to church. I love being with other Christians and talking about Jesus.

Glen and Denise have become my good friends and encourage me in my faith. I go to a Bible study. I did my adherency course with Debbie and Wayne Cooper. And now I am an adherent of The Salvation Army. Our corps officers – Captains Phil and Tuesday McCall – are beautiful. So is soldier Hazel Menzies. They’ve all welcomed me with open arms.

Jesus is my Saviour, he is the son of God. I’m so thankful for being able to talk to Glen at work about God – and look where it’s led to!