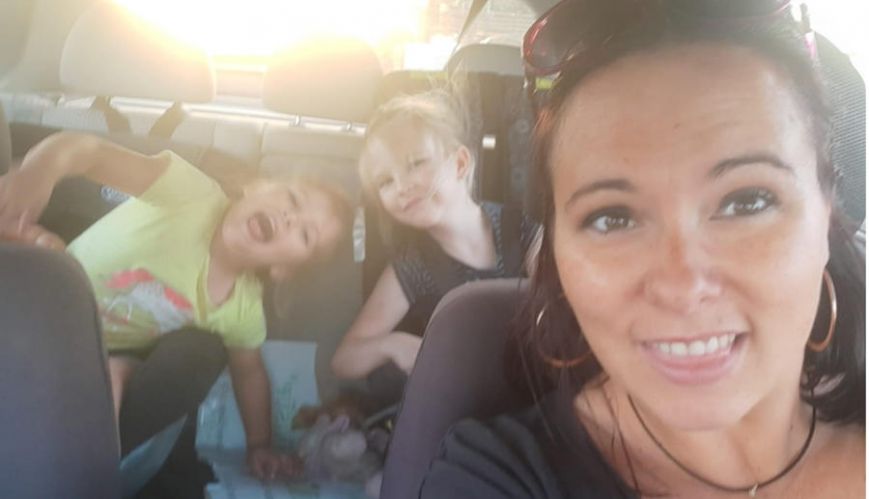 In this day and age, it is hard to believe someone in their mid-30s would not have heard of the word ‘joy’, know what it means or experienced it – but that is the testimony of Bayside Corps’ newest soldier, Mel Myors.

Mel said it was not until about two years ago that she began to truly understand and experience the three-letter word.

This self-confessed ‘wild child’ said the revelation brought about a realisation that she needed a change from being surrounded by a lifetime of chaos, unrest and abuse and little knowledge of God.

Despite not having grown up in a family where love or Christian values were shown, her mother did speak to God and had taught Mel that she could talk to God but couldn’t bargain with him: “So I knew there was a God.”

Mel said that, for her parents, affection was shown by a tap on the arm. “They didn’t know how to cuddle or kiss.”

“We’ve had three Christmases that I remember and my siblings paid for those and one birthday, which was my 28th, that my husband did,” she said.

Limited contact with church people in her early years cemented in her mind what Christians were like, which came back to her in her darkest moments.

“I remembered there was something about Christians – they just had this glow and love. I just wanted that,” she said. “Christians seem to have a lot of less drama, a lot of love, a lot of compassion and empathy.

“I was in the drug world and, even in my relationships with my family and my husband, it was always arguments or always something negative. I never knew joy.

“I remember saying to someone up in Cairns when they mentioned the word ‘joy’. I said: ‘What’s joy?’ because I never knew there was a word called ‘joy’.

“They said: ‘It’s like an extreme happiness. I thought: ‘I just want what they’ve got. I want to feel loved. I want to be part of that family, not this world. Get me out!’.”

Mel said that out of the most chaotic times in her life came her fondest experiences. The latest was her enrolment as a soldier at Bayside Corps in the outer eastern suburbs of Brisbane.

Amid the uncertainty and disruption that surrounds the COVID-19 pandemic, Mel signed her Soldier’s Covenant in a small ceremony at the corps.

Mel has been attending Bayside Corps for two years and also is part of the Army’s God’s Sports Arena (GSA) mission, which has services in the Brisbane City Temple on Sunday night – COVID-19 restrictions excluded. 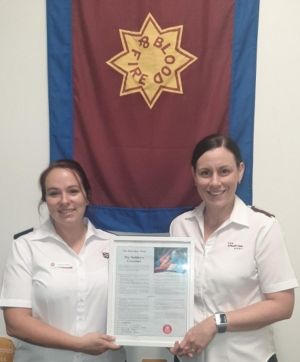 Mel Myors, left, with her Soldier’s Covenant, after having been enrolled by Lieutenant Natalie Frame.

The plan was that members of the GSA community would take part in Mel’s enrolment at Bayside but, due to the restrictions, that did not happen.

Despite these setbacks, Mel was still keen for the enrolment to go ahead – and it did.

Mel is a self-confessed ambivert: an extroverted introvert. In between her love of socialising, she enjoys time alone to recharge.

She was born in New Plymouth, on the North Island of New Zealand, and moved to Australia with her family when she was three. Her parents separated five years later.

She said she left home when she was 12 and has lived “virtually everywhere”. With a chuckle, she lists Muswellbrook, Parkes, Orange, Newcastle, Armidale, Mackay, Maclay Island, Cairns and Brisbane. “I literally lived in all of those places five times over before I settled in Brisbane. Her father lived in Brisbane and her mother in Newcastle, so a lot of her time was travelling between those two cities, too.

She began using drugs and drinking alcohol at an early age. She left school in Grade 8, after having been bullied, and left home at 12, after having been sexually assaulted and lived on the streets. For most of her life, she has been heavily involved in the drug scene, the sex industry and what could be termed these days as outlawed motorcycle clubs. Through it all, she has managed to avoid going to jail.

“I was very hurt and turned into a very violent person. I’ve tried committing suicide three times. I didn’t see there was a purpose in life. I didn’t know there was a God that loved me and so I decided to take my hurt out on people and started bashing people,” Mel said.

“I grew up with motorcycle clubs. They were my family. They’re the ones that I went to for that longing of love and affection and protection. When I was 19, I had a son. He’s now 19.”

She met her son’s father at 16 and met and married her two daughters’ father about 10 years ago. While still married, they are separated. She lives with her two daughters – Scarlett, 5, and Karana, 4.

Life began to turn around for Mel after a plea from her eldest daughter [who was four years old at the time] when aimlessly going from place to place.

“She said, ‘Mum. Can we just go home?’” Mel said. “A lightbulb came on ... ‘Mel, what are you doing?’ That’s when I thought, ‘I’ve got to get to church’, so I went to a church that was near me, which started my journey of learning who Jesus was.

“That was the pull when everything was so dark. I just thought, ‘There’s got to be more to this. There’s got to be a purpose to my life’ and I remember saying to God, ‘Why did you put me here to go through all this?’

“I then remembered there was something about Christians. I just wanted that.”

Mel says that after almost 25 years using drugs she has been ‘clean’ since November 2017.

“While still being homeless, living in a church dormitory, being clean for three months, volunteering at The Salvation Army but still involved in sex work, I gave my life to God in March 2018. “I said to God: ‘I don’t want to do this anymore.’ I decided I wanted to follow God 110 per cent.

That decision hasn’t meant the road of salvation has not been a straight and smooth one. She is still haunted by how drugs are affecting family members, has a chronic bad back, fell on some stairs and broke an ankle, ‘wrote off’ her car, a short relapse after having been 10 months ‘clean’ and her mother being admitted to an intensive care ward.

When she suffered a relapse, she said she felt like she was losing her grip on God. “After three weeks, I called out to God: ‘Okay God, what am I doing wrong? What do I have to do because I’m just holding on?’ All I heard was him say, ‘Trust me.’ That was so hard when you don’t trust people. How do I trust God? How do you even take that step?”

Keep your eyes fixed on him was her encouragement. “So I did,” she says.

When her mother was in Newcastle hospital’s ICU ward, Mel said she visited her and said a “healing prayer” for her, asking that God would bring healing, salvation and a second chance. At that stage, Mel said she was not accustomed or confident in praying aloud but put aside those feelings.

“She walked out of ICU eight days later praising God, so that was another miracle,” Mel says. “It just shows what God can do. Storms aren’t there to break you. Some storms are there to make you and the storms that aren’t of God, he restores from ashes.”

Mel said those situations seemed like a trauma at the time but believes it was Jesus breaking chains in her life and making all things new.

Now, 20 months after having given her life to Christ, 18 months clean, two years free from sex addiction and going through more recent challenges, she confidently says, “He has made me new from the inside out. I now have joy. I’m not angry. I’m a great mum with kids who love and follow Jesus. I feel loved and worthy by Jesus. I have a church family [where she leads a discipleship group] and I’ve completed a certificate III in business administration.”

* Today is Overdose Awareness Day. To read more about this day click https://www.overdoseday.com/