You are here: Home › Salvation Stories › Michelles Path To Making Peace With The Past

Michelle's path to making peace with the past Michelle's path to making peace with the past

Michelle Zammit came to a crossroads during her divorce – she could either live in resentment and hurt or choose a path to acceptance and forgiveness.

As told to Major Bryce Davies*

My childhood was great. I grew up in a safe and loving environment. My mum ran the household of three kids and a husband. My father had his own business and was a great provider, although I would describe him as being a parent who was not present even when he was in the house.

My parents’ marriage broke down when I was 17. I was doing my Higher School Certificate (HSC) at the time. It was an absolute shock to myself and my brother and sister. We had no idea. I’ll never forget the way my father announced it to us. He just said that he was in love with another person and was leaving. This moment set off a chain of events that, to this day, 30 years on, still has detrimental effects. 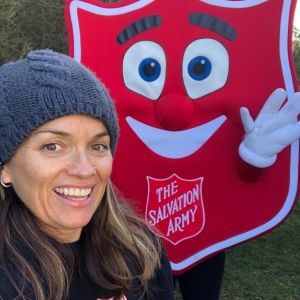 Michelle is now an active member of 2508 Salvos, based in Helensburgh, NSW.

I stumbled through my HSC. I didn’t do very well, even though I was expected to. I didn’t get to go to university and so I went out into the workforce and got a job to help Mum with the mortgage.

Six years ago, my own marriage broke down. My son was five years old. I describe it as one of the most traumatic times of immense pain and sorrow in my life. Both my parents’ marriage breakdown and my own came as a total shock to me. These events pulled the rug from beneath my feet, really turning my life upside down.

Resentment came first, and then the anger. I had fantasies about revenge on my husband and other awful feelings. That went on for a while.

The journey of forgiveness wasn’t something that just magically happened. I found that once I accepted that the past could not be any different, I moved into the space of forgiveness. I realised that I was hurting myself by not accepting what had happened in my marriage and the situation it had left me in. This may sound a bit funny, but you know when a dog vomits and they go back to lick it up? [Proverbs 26:11]. That’s what I was doing; I was effectively staying in the same place of hurt, anger, resentment and hate.

So, it was a choice of which road I wanted to take. I went to some counselling and my counsellor spoke to me about forgiveness. She wrote on a piece of paper, ‘Forgiveness is not something you give to others, you gift it to yourself’. I still have that bit of paper. At the time, I didn’t believe that I could do it, and I probably didn’t want to even entertain it because I was that angry. Nor did I think I was worthy to give myself that gift. But once I let go of my fantasies of revenge and what might have been, and accepted the truth, I found that on the other side of forgiveness there is freedom.

I met Lauren [Lauren Martin, Mission Leader, 2508 Salvos in Helensburgh] one afternoon around school pick-up time. It was right at the start of my marriage break-up. I had just been on a walk in the bush. Lauren spotted me and said, “Oh, hi mate, do you run?” I said, “No, I’m not a runner.” We got chatting and she said, “If you’re free tomorrow why don’t we try and go for a little run?” She was trying to get back into fitness and was looking for running buddy.

And that’s how it started, this pathway to God. As they say, God works in mysterious ways and I truly believe that he puts people in your life at the times you really need them. It was just amazing how Lauren just kind of came out of nowhere! Michelle (left) with 2508 Salvos Mission Leader Lauren Martin. They began trail running together, which led to chats about life and faith.

She wasn’t the ‘pushy Christian’; she would always just talk to me about this ‘God’. And I was like, “OK, that’s nice, whatever.” I was always sitting on the edge with my toes in the water but not fully jumping in, so to speak.

One particular morning Lauren and I were down at the local dam and I’d had a really hard, just a shocking, week. I remember just dropping to my knees – and it always makes me emotional thinking about it – asking God if he could help me. I remember Lauren hugging me and she said, “You’re going to be OK.”

It was just letting God into my heart. I don’t know why I had been resisting for so long, but I just dropped to the dirt and said, “I need you now, God, I really need you.”

When I talk about it now, my faith, it really gives me comfort. I just know that God has my back and he has a plan for me. I also just love it that I can talk to God anytime, anywhere, and he loves me for who I am, flaws and all. It’s also given me a strength that I felt I’ve not had before.

I talk to God a lot. I do a lot of reading of the Bible and I try to understand it. We also connect weekly with some other friends and have chats about God and what he’s doing in our lives and what he’s saying to us and keeping each other accountable. It’s a wonderful group to be part of, even blessing people who are doing it tough with simple meals. It’s really just about giving people hope and letting them know we’re thinking of them – just looking out for each other.

I believe that everybody has a purpose. There’s a lot of people out there who don’t think they’re worthy of that. Sometimes it’s up to other people to help people see it.

Michelle Zammit attends 2508 Salvos, an organic mission expression of The Salvation Army based in Helensburgh, NSW. She is studying a Certificate IV in Community Services.

* An edited extract of an interview from Stories of Hope, a podcast with The Salvation Army’s Major Bryce Davies.