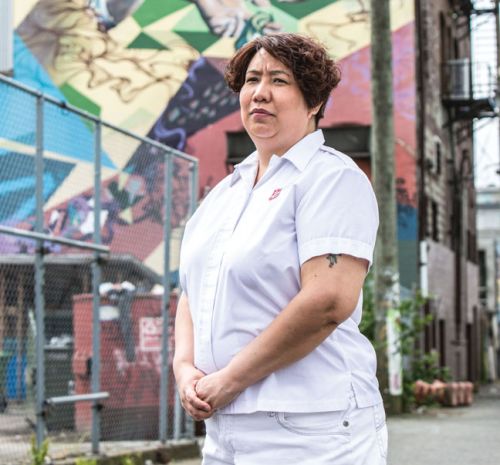 The love of Jesus and his people helped Jennifer Allan start a new life dedicated to others. Photo: Kim Stallknecht.

Jennifer Allan came to Vancouver in September 2002, with five cents and the clothes on her back. An older sex worker took her in, made her a meal and told her the safer areas to work. She rented a room at a hostel on Main Street, sleeping with a knife under her pillow. “You’re always scared, always on edge,” she says. “There’s a constant fear of being sexually assaulted, because people don’t see sex workers as human beings.”

Jennifer could have been one of the 1200 missing or murdered indigenous women across Canada, but instead, she met The Salvation Army. “I’d had a lot of bad interactions with the church,” she says, “but 614 Corps in Vancouver was different. I’d be trying to pick up a ‘john’, and they’d come and talk to me, and call me by name.”

Born in Whitehorse, Yukon, Jennifer is of Tlingit descent and belongs to the Kwanlin Dün First Nation. Her mother was a heroin addict, and Jennifer was raised in foster care. At 18, she went to live with relatives in British Columbia. “They lived a totally different life than I was used to,” she says. “There was a lot of domestic violence, a lot of drug use. I couldn’t handle it.”

At a party, she met a woman who offered her a job babysitting her children. Eventually, the woman and her drug dealer suggested the idea of prostitution. “They said, ‘Men will use you for sex, you might as well get paid for it,’” she recalls.

Jennifer lived with them for a while, and then moved to Calgary. She stayed out of the sex trade for a year, but, faced with poverty, started working for an escort agency. When two police officers roughed her up in an alley, Jennifer fought back. She was charged and convicted with assault, and given a suspended sentence. Having a criminal record began to have a huge impact on her life. “No one would hire me,” she says. “I owed my landlord $300, and it was either get the money or go sit in a dumpster. So I went to a bar and got drunk, and forced myself to stand on a street corner.”

A trip to the United States – forgetting her probation orders not to leave the province – led to another arrest. “It kept growing from there,” she says. “I was in and out of jail for failure to appear in court, breach of probation. I couldn’t get a job, so I kept working the streets.”

It was a dangerous business, with the constant threat of violence. In May 2000, a friend was found dead under suspicious circumstances, but police ruled it accidental. “Her life was three little lines in the newspaper – ‘prostitute found under car.’ That was it,” she says. “That’s what led me to becoming an advocate for sex workers.”

One night, while going to meet some friends, Jennifer saw a group of men surround a woman and cut her throat with a beer bottle. “In street code, you can’t go to the police and say, ‘I witnessed attempted murder,’ because then you’re a rat and people come after you,” she says. “And so I drank two four-litre bottles of alcohol a day, just to function.”

A month later, Jennifer was hospitalised after being sexually assaulted and severely beaten. She dealt with the trauma by going on a two-month crack binge. “When I was on the streets, I lived from hour to hour,” she says. “Because you’re prepared that you might die – a ‘john’ is going to pick you up and kill you, or you’re going to die from a drug overdose. It’s not like you want to die, but you accept that it’s a major possibility.”

Things started to change when Jennifer moved to Vancouver. She was still working on the street, but was intrigued by the Christians she met in the neighbourhood. “They talked to me like a human being, which was totally new to me,” she says. “It made me want to be part of this group, to find out what they do.”

Aaron White, corps leader at 614 Corps, remembers this time. “At first, the relationship was turbulent,” he says. “She was suspicious of all Christians. It took a long time to show her that we weren’t going anywhere and that we could be trusted.”

In July 2003, the Army began partnering with Linwood House, a beautiful home in a rural setting on the Sunshine Coast of British Columbia, to offer retreats for women caught in the cycle of addiction and prostitution. Jennifer was one of the first two women to attend, but she was guarded. “I remember asking (then-Captain) Danielle Strickland, ‘Is this one of those things where you hit us over the head with the Bible and tell us to leave the sex trade?’” Jennifer recalls. “She said, ‘Well, only if you want us to.’ At that point, I knew this was something different.”

Jennifer’s view of Christians and Christianity began to shift. “I thought it was a bunch of rules and regulations,” she says. “It was Danielle Strickland who taught me that it’s about having a relationship with Jesus.”

In January 2004, Jennifer went into treatment and got clean. She left the sex trade after a pimp tried to force her to work for him, and beat her up when she refused. “He said he could kill me and no one would care,” she says. “And I realised he was probably right.”

But she didn’t leave the women of the Downtown Eastside behind. In October 2004, Jennifer started an outreach to survival sex workers called Jen’s Kitchen, making and handing out sandwiches to 30 women a night. She went into alleys and brothels, often joined by people from The Salvation Army’s War College, to connect with women who are usually working during other free community meal times.

Over the next 10 years, Jennifer continued Jen’s Kitchen, worked for different social service organisations, got involved in community activism, spoke to university classes about the survival sex trade, did research on missing and murdered women across Canada, and advocated for changes in the law to protect sex workers.

“We can’t keep viewing sex workers as criminals. We need to start viewing them as victims of violence,” she says. “Prostitution is a result of poverty, addiction, mental illness, lack of housing and job opportunities, and criminal records. We need to make sure women have safe and affordable housing, access to the education system, free long-term counselling, food in their fridge and access to childcare.”

Although she attended 614 Corps, Jennifer was reluctant to become a soldier. “I was fearful I was going to screw up,” she says.
But in 2013, when she was working at a shelter for people with addictions and mental illness, two of her clients committed suicide. Jennifer was devastated, wondering what direction her life should take. She felt God telling her it was time to commit. After completing a year of Battle School at the War College, Jennifer became a soldier in 2014.

“Being a soldier means I’m a warrior for Christ,” she says. “I’m an advocate, Christ’s support worker, to my community.”
Today, she helps to lead street and prison visitation ministries with 614 Corps. “She is passionate for justice, prayer and advocating for missing and murdered women,” says Aaron. “She is generous and full of life.”

The history of the residential school system in Canada casts a long shadow over the relationship between the church and First Nations people, but Jennifer wants to be part of the rebuilding process. “Satan wanted to destroy a culture,” she says. “He wanted to make sure that when we heard the name Jesus, we ran 100 miles in the opposite direction. I want to let him know he lost.”

First published in the Canadian Salvationist.

NOTE: Survival sex is prostitution engaged in by a person because of their extreme need. It describes the practice of people who are homeless or otherwise disadvantaged in society, trading sex for food, a place to sleep, or other basic needs, or for drugs.