You are here: Home › Salvation Stories › When I Met Jesus Life Suddenly Made Sense

When I met Jesus, life suddenly made sense 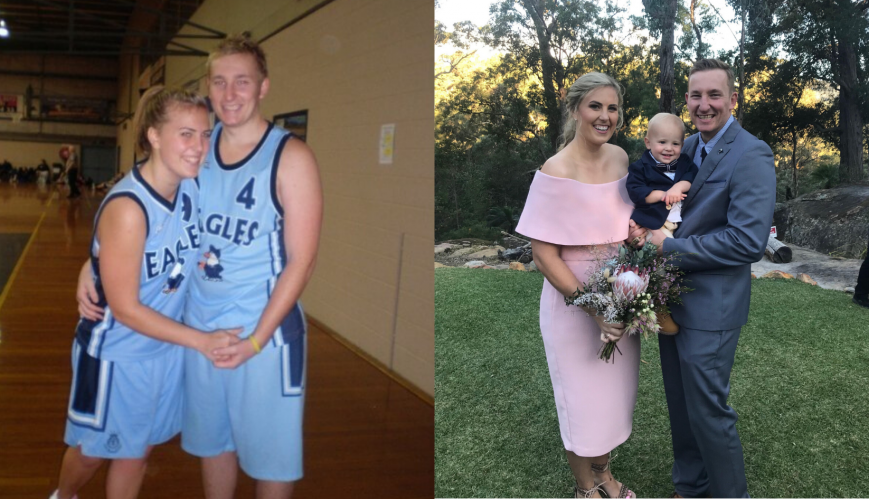 When I met Jesus, life suddenly made sense

Jared Sheehan and Natalie Smith met at a Salvation Army basketball carnival (above left) and later married. (Above right) Attending a family wedding with their first son, Oliver.

I didn’t grow up in a christian family and, although I knew about God, I was never encouraged to have a relationship with him. Despite this, I still had a good upbringing and my parents tried their best to show me how to be a good person. I played sport, hung out with mates and generally just ‘cruised’ through my comfortable upbringing.

But when setbacks and tragedy hit, a lack of resilience and greater purpose left me struggling to cope. One day, after school, one of my good friends took their own life. Another friend was killed about six months later.

I just didn’t know how to deal with it all. These two things sent me on a massive downward spiral and completely changed me. And not in a good way. I started hanging out with the wrong people, I was angry and was getting into every fight I could, I was drinking heavily, doing party drugs and pretty much anything I could to forget about it all.

Then, one of my friends invited me to attend a Salvation Army basketball carnival, which seemed like a fun thing to do. During the week, I met loads of people who were ‘different’, but different in a good way. I was curious. And one of the people

I met stole my heart. Natalie Smith was blonde, beautiful, fun and engaging, and we quickly struck up a friendship.

Meeting Nat and getting to know the person she was got me interested in knowing more about why she was such an amazing person and how God had played such a big part in her life. So, as our relationship grew so did my knowledge of God.

Within six months of dating, I accepted Jesus into my life. It was a complete turn-around and life suddenly made sense. I can honestly say that since becoming a Christian my life has changed drastically for the better. Speaking from experience as someone who’s tried it all, there’s nothing more fulfilling than living life God’s way and discovering a purpose with eternal impact.

Nat and I have since married, and we have two sons, Oliver and Archie. We attend Menai Salvation Army in Sydney.

About six years ago, I felt called to become a Salvation Army soldier. To be honest, I never used to see the point in people becoming soldiers. I thought it was pretty weird and just didn’t really get it. Over time, as my relationship with God grew, I started asking God what more he wanted of me. To my surprise, gradually my opinion of soldiership changed.

I realised that becoming a soldier was nothing to do with the things you can or can’t do or about the uniform, but it’s about me stepping up and making a covenant with God; a covenant that I can’t argue with. How can I disagree with giving God every single part of my life and saying I’m going to rid myself of anything that could possibly cause me or anyone else to stumble?

Sports ministry remains a passion for me and I still play basketball twice a week in community teams. I feel like God uses me where I am, with the people that I meet. I can try and change the stereotypes that people have about Christianity, just by meeting them where they’re at and journeying with them. I can try to show them who Jesus is.

As told to Lauren Martin.