You are here: Home › Stories To Share › Fathers Day Miracle 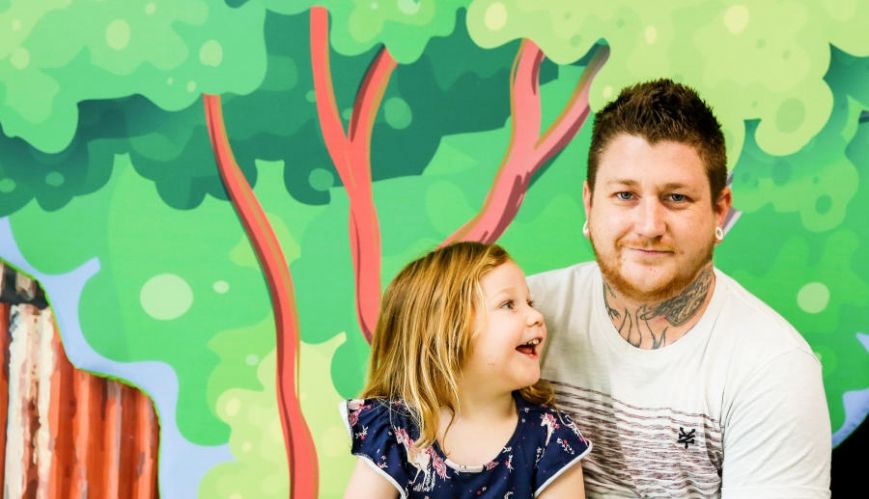 Cameron Brewis and his daughter Aubree who have found a spiritual home at Gawler Salvos in Adelaide. Photo: Duan Kereru

A young father will turn up to a church north of Adelaide on 6 September – Father’s Day – and thank God for the miracle of grace. Walking into the Gawler Salvation Army  building with him will be his two little girls. It’s something that Cameron Brewis never dreamt would be possible just a year or so ago.

Cameron’s life was a mess. He was involved in criminal activity. He had lost his marriage and his two girls. Now 33, Cameron walked away from God and into a life of drugs and alcohol at 21. The next 10 years were not pleasant, except for the arrival of Grace, now 8, and Aubree, 4.

Eighteen months ago, Cameron was drinking at a local pub when Gawler Corps Officer (pastor), Major Darren Cox, struck up a conversation. Darren was there as part of his usual Friday night pub round. Cameron was cynical of Darren’s interest. He did not have a good impression of church people. The pair chatted again the following Friday and every Friday for some time. At first, Cameron gave Darren a hard time, not holding back on what he thought of church. Darren kept turning up and listening.

Cameron came to accept that Darren was somebody who was genuinely interested in what he had to say and wanting to help make his life better. When Darren suggested Cameron come to his church to see for himself, Cameron accepted. He saw Darren as authentic. In Cameron’s words, Darren was “the real deal”. “When I had to appear in court, Darren came with me,” Cameron says. “I hated church and everything to do with it. But Darren changed my whole idea about church.”

A guitar player, Cameron was invited to join the Gawler worship band for Sunday morning services. With the help of his new friends at Gawler Salvos, Cameron found his way back to God. He now has shared custody of his two girls. They have joined him as Sunday morning regulars at Gawler. “Actually, they now come three days a week, because they come to music practice with me one night a week, as well as the prayer meeting on another night,” Cameron says.

“I’m in a really good place right now. Having the girls in my life is great. They are two of the main reasons for wanting my life to change. I want them to be proud of me. I don’t see being a single father as a challenge. It’s more of a benefit that I can bring the girls to church, where there are so many role models to provide a spiritual base for them.”

Cameron is now also a youth group leader and employed in the church office as an administrative assistant.