Major Lauriee Arthur (left) met with the Minister for Defence, Senator Linda Reynolds, after her address to the personnel on operations to the Middle East.

Lauriee follows in the tradition of the first Salvation Army officer to be deployed to support troops, when Founder William Booth commissioned Adjutant Mary Murray to go to the Boer War and find ways to support soldiers on both sides of the conflict.

Major Mairi Mitchell, RSDS senior representative at Robertson Barracks in Darwin, was also deployed to the Middle East this year. She left on 11 February but, due to the COVID-19 pandemic, returned to Darwin on 3 April and went into quarantine for two weeks. 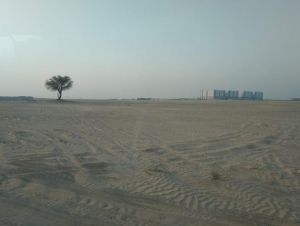 The desert sands surrounding the base.

Lauriee, who is a senior RSDS representative and team coordinator at Gallipoli Barracks, Brisbane, served Australian Defence Force (ADF) personnel at the Middle Eastern base, focusing on providing welfare and wellbeing support to all personnel.

“My role was exactly the same as I have here at Gallipoli Barracks,” says Lauriee. “The Salvation Army in Australia works predominantly with the Australian Army, and my deployment also included serving Royal Australian Navy and Royal Australian Air Force personnel – many of whom didn’t know about the ‘Sallyman’ (as RSDS representatives are often referred to).”

As the number of females entering the infantry as soldiers and officers has increased in recent years, Major Brett Gallagher, Chief Commissioner of the RSDS, spoke about the need to appoint a female Sallyman – or “Sallyma’am” – into an infantry unit. Lauriee was appointed to the 6RAR infantry battalion at Gallipoli Barracks in 2018 and then deployed last year.

“I found that being a female endeared me to other women, especially in the air force,” says Lauriee. “All personnel, though, men and women, were happy to see the Sallyma’am, with a few from the air force and navy asking why they didn’t have one in their service!” 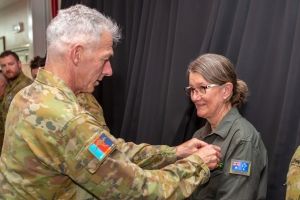 Lauriee’s role in deployment involved providing support to all ADF personnel. “I got to know all of the ADF members, focused on building relationships and then was able to check in on them to see how they were, how they felt about what was happening at the time, and how their loved ones at home were going.

“People came to me to have someone to talk to. They came to me with work problems, family issues, health concerns and I also had an opportunity to share my Christian faith. I supported the base chaplain to run a Bible study and church services too. It was also a pleasure to attend the monthly coalition force church service that the chaplain started while I was there.”

Lauriee, and the other Salvation Army RSDS members who are deployed on a four-month rotation, assisted the ADF chaplain with a rest and recreation program where personnel were taken to culturally important locations in the host country to increase their understanding of that nation’s people and culture.

“This gave us time to chat with people and get to know them,” shares Lauriee. “The Sallymen also helped welcome newcomers to the base, were part of the base orientation process and farewelled those returning to Australia. I particularly enjoyed Fridays – the mornings with ADF personnel providing refreshments during weapons training, then in the afternoon sharing iced donuts with headquarters staff. The perfect end to a very busy week!

“It was an enriching and challenging experience, I loved it, and would do it again. The biggest challenges were being away from family, and the endless, terrible humidity and heat.”

Resuming her role at the Gallipoli Barracks, Lauriee continues to work with Australian Army military personnel and their families.

“I work with both men and women, but as a ‘Sallyma’am’, can work a bit differently to my male colleagues,” says Lauriee. “I work a lot with the wives and partners of the soldiers, especially when their partner is deployed or away for weeks on training exercises. This includes supporting a wife or family until other close relatives can get there in a crisis.” 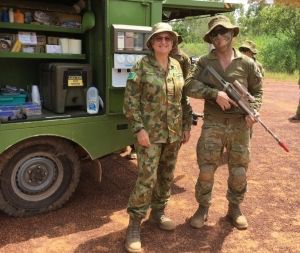 Major Mairi Mitchell (left) providing refreshments to soldiers before she was deployed to the Middle East.

Although the COVID-19 pandemic cut her deployment time short, during her time in the Middle East, Mairi also served ADF personnel, providing morale and wellbeing support and being a friendly and encouraging face to everyone on the base.

“I also helped with the tours, taking personnel to places of cultural relevance,” Mairi says. “These were more than just opportunities for rest and recreation. They were to give people an insight into people in a different culture with different customs, history, food and outlook.”

Mairi, who, as a Salvation Army officer, also served for 12 years as a reserve chaplain with the ADF in locations around Australia, already knew many of the personnel on the base.

“I visited everyone in their workplace and made sure I was available to them,” she says. “I had a few faith conversations with people who came to our church services, and those who didn’t. I had conversations about families. I was welcomed with a smile. There was that sense that we, too, are here by choice, and have not just been sent.

“Relationships were especially important once the quarantining for coronavirus started. I made sure people got everything they needed and were regularly contacted. The whole environment changed once the pandemic was declared. We were adhering to the regulations and guidelines from Australia, but also to our host nation’s as well.”

Mairi believes that, in years past, it was helpful having both genders as chaplains and RSDS representatives. “Back then, it was easier as a female to express emotions but now, with more females in the military and men and women serving together as a team, there is much more equity in the way we work and communicate. Being deployed overseas is based on merit, not gender.”

The morale side of the role in deployment was, says Mairi, very similar to that on an Australian base. “Here, when soldiers have less contact with families when they’re out in the field on exercises, morale is very important. When people are overseas it’s similar.

“There can also be more, or less, stress overseas, depending on where you are. Sometimes if you’re here and your family is close-by but you still can’t see or communicate with them, that can be harder that than being far away. It’s harder for the families left behind, facing the unknown. For a soldier it’s hard too, but it’s also a time of growth and challenge.”

Mairi hopes to return to deployment in the future.

“Despite the challenge of not being able to just call my family and say goodnight, and the time difference between us, I would love to do it again. 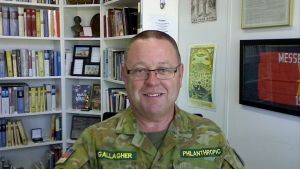 Major Brett Gallagher, RSDS Chief Commissioner, said that when deployments began a few years ago, a number of female representatives put up their hands to go.

“Many female ADF personnel had also been deployed, and, as many of the ADF chaplains are male, us being able to send female representatives can add to and complement the mix of pastoral care and welfare offered.

“Until last year, the RSDS has always deployed men, except for Adjutant Mary Murray and a couple of other ladies in the Boer War.

“It’s been great for us to deploy Lauriee last year and Mairi this year. We hope Mairi can finish her deployment when the time is right.”