You are here: Home › Stories To Share › Volunteering Changed My Life Susan Reea (left) was enrolled as a soldier of The Salvation Army in Sydney in October 2019.

I knew about The Salvation Army because my mum used to go there when we were kids, but I hadn’t been for years.

I saw on Facebook they had advertised $10 food hampers, so I put my name down for one. I came in for it, but the truck had just come and the hampers weren’t ready, so mum and I volunteered to help pack them. So, we packed them, and I liked it, and I just thought, “I want to volunteer.”

[Two years previously], I had been thrown in jail. There was no evidence to convict me because I didn’t do it, and I can sit here and say I didn’t do it, but only God knows. I spent nine months in jail.

It could either make or break me. I had lost my faith in God, the whole lot. We had lost everything. We were homeless, living at my mum’s house. And then, about four weeks after my brother died, I was offered a house. We ended up back together, all my kids, and we were a family again!

But we struggled. When I went to pick up that hamper, I was at a real crossroads in my life. I was thinking, “What do I do? Do I hate everybody and be really bitter and let this take me down a path of bitterness? Or do I try something different?”

And then came the volunteering opportunity. 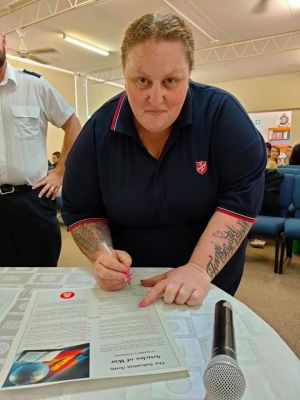 Since volunteering at the Salvos and going to the Salvos church and being mentored, everything’s just different. When I first came in, I was really rough around the edges. Every second word was a swear word. Now, my whole world is different! The way I think of things is different, the way I react to things is different. Before, if something little happened, I probably would have been angry and carried on about it, but now, it’s just like, “Don’t worry about it, we can fix it, whatever.”

Eighteen months ago, if you had said to me that you’re going to become a soldier of The Salvation Army and sign a covenant that says – ‘Having accepted Jesus Christ as my Saviour and Lord, and desiring to fulfil the mission of God he has for me and his Church here on earth as a soldier of The Salvation Army, I now by God's grace enter into a sacred covenant’ – I would have told you that you’re an idiot! Becoming a soldier has given me more of a purpose. I’ve just gone from strength to strength. I love what I’m doing. I love volunteering, I just love helping people.

Susan Reea is a Salvation Army soldier and volunteers at Macquarie Fields and Greater Liverpool Salvation Army. In October 2019, she was recognised for her volunteer work with a certificate and plaque from Federal Member for Werriwa Anne Stanley. She was enrolled as a soldier that same month.

* This week is National Volunteer Week. To find out more about volunteering at The Salvation Army, head to: salvationarmy.org.au/volunteer