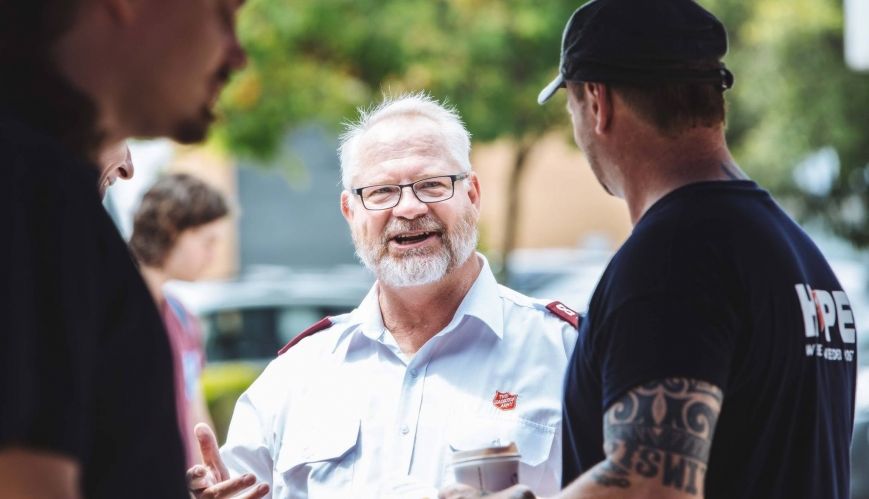 South Brisbane Hope Communities, led by Major Colin Hopper, sees itself as a "missional community" seeking to connect in non-traditional ways to people in their local area.

Over recent years, I've become concerned about what I see as the churchification of The Salvation Army.

That is, the push to make us like other churches. The utilisation of the word “church” on Salvation Army buildings, stationery and literature I believe is counterproductive to our mission and calling.

For many years, Salvation Army centres were designated as “corps”. It's terminology that is little understood in today’s world and the need for a more relevant definition is desirable.

However, the term “church” is highly questionable in a Salvation Army setting. While I understand the philosophy behind its use, to designate our presence as part of the global Christian community, the reality is that many non-Christian people, at least in Western culture, have a negative attitude towards the church.

These are the people we seek to reach, so why do we use terminology which engenders a negative response?

Among the ecclesiastical community we have, at times, suffered from an inferiority complex because we were not, in the eyes of others, a church.

However, because of that very issue we often found ourselves far more accepted and relational to the non-church sector of the community. This poses the question: in our rush to be seen as a legitimate church have we surrendered that distinctness that made us so esteemed and effective?

I suspect that this issue may well have exercised the mind of the late General Eva Burrows, who said: “The Founder [William Booth] marched us out of the church and into the world – and I am not planning to march us back.”

While we are certainly part of the universal Christian church, we are a unique part. If we insist on using the “church” terminology we may well fade into oblivion as just one of the many denominations in what is now, in Western culture, a highly competitive member market. Whether or not we can survive in such a setting is highly questionable.

In his book, The Authoritative Life of General William Booth, George Scott Railton records the words of the Army’s founder: “Some of the evangelists whom I had engaged to assist me rose up and wanted to convert our Mission into a regular Church ... so I called them together, and addressing them said, ‘My comrades, the formation of another Church is not my aim. There are plenty of Churches. I want to make an Army. Those among you who are willing to help me to realise my purpose can stay with me. Those who do not must separate from me, and I will help them to find situations elsewhere’.”

Various dictionaries all lead with the same definition of the word “church”: “A building for public, especially Christian, worship.”

While we acknowledge that the theological meaning is much different, the reality is that the dictionary definition reflects public perception.

To many non-Christians the word “church” denotes a building, something that is static and in many ways cloistered.

In comparison, the terminology “mission” brings to mind an image that is active, mobile and purpose driven. Most dictionaries speak of: “The vocation or calling of a religious organisation, especially a Christian one, to go out into the world and spread its faith” (Oxford Dictionaries).

Missions tend to have a sharper focus on their reason for existence; they instinctively know what they need to achieve and have the vision and adaptability to realise their goals.

Since they possess a clear focus they are not easily sidetracked or distracted by other issues, even though such issues may be quite worthy.

The Christian Mission, out of which The Salvation Army evolved, had a clear concept of the role of its centres and simply designated them, “mission stations”. Perhaps this is a more relevant designation that clearly depicts the role and mission to which the Army is called.

As an organisation we were missional in our mindset and terminology. It may well be that in adopting the terminology “church” we have infused into our members a church mindset rather than that of a Holy Spirit-fired mission.

If you tell members they are a church, that will become their mindset. If you tell them they are a mission, you will get an entirely different response.

The bottom line is: are we a church or a mission? Perhaps some robust discussion is needed to come up with terminology which more aptly describes the Army’s mission and refocuses our mindset.