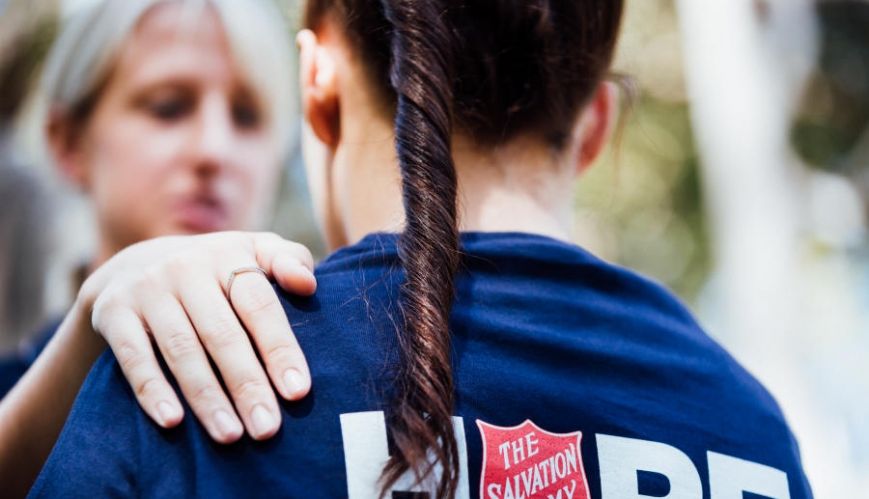 Words for the poet are much like clay for the sculptor. They have weight and can be shaped and moved to bring meaning. Some words are almost shocking. Not because they are crass or vulgar, but because of what lies behind them.

In my role as a Social Mission chaplain, I met a woman one morning at a pre-arranged location so that I could accompany her to court. We had never met and simply had a vague physical description of each other. She was told, though, that “Belinda will be in a Salvation Army uniform.”

Speaking limited English, her first three words to me were, “I am afraid.” And she was. Visibly trembling, pale and tired. Afraid.

We had a little time before we had to be at the courthouse. I knew these streets well, so we walked while she caught her breath. And she gripped my arm as if it was a lifeline.

The sheriff on the front door at the courthouse was nothing short of a godsend in the way he expedited entry for us, but I guess he had seen enough escorted women come through the doors to just ‘know’.

In the ‘safe room’, we waited. I’ve lost count of the number of safe rooms I’ve waited in over the past few years. They’re all pretty much the same. A bit drab. A pile of outdated magazines; stands brimming with family and domestic violence literature in multiple languages; victim services brochures representing every kind of group that may have experienced the effects of family violence.

The obligatory tea and coffee station usually runs hot on AVO (Apprehended Violence Order) day, but COVID-19 has even changed that. The number of mentions and matters that can be heard are kept to a minimum.

The Children’s Aid Societies worker assigned to us, to liaise with the Domestic Violence Liaison Officer, was brilliant. The translator who attended even more so. Around the same age, with stories of family and a common language and homeland, I watched two strangers settle into conversation. And I wondered what it might be like to experience the ease of being with someone who understood your heritage and culture at a time like this.

Safe-room waits are long, and a bit back and forward as negotiations take place. Terms were eventually agreed upon and we could leave. And the same scenario that I’ve seen countless times now began to play out. She asked if he was okay. “Did he look well? Did he look angry? Did he want to see me? Speak to me?”

It’s hard to stop loving someone, even when they’ve been anything but loving. And the story she shared then was full of shocking words. Then she wept – as almost every person who sits in a safe room at the end of their day in court does. And really, the only appropriate response it to sit right there in the space with them. And wait.

We finalised the bits and pieces of information that needed to be said and written down. I promised to convey everything to her caseworker to spare her of another over-the-phone translation session. Then we walked out together and I watched her go, until I knew she was safe.

I do hope, in these situations, that I give people a sense of what it is to be seen. To be heard. To be cared for. Because when I think of how Jesus went about his ministry, that’s mostly what he did. He took notice of those who were overlooked. He reached out to those deemed unclean or unworthy. He truly saw people. He heard the real cries of their hearts. He gave them dignity in the way he cared for them.

If we can go out and do even a portion of that wherever we are, maybe that’s how God intended for us to live.

Captain Belinda Cassie is a Social Mission chaplain based in Sydney.