You are here: Home › Viewpoint › Dusting Off The Uniform Debate

Dusting off the uniform debate 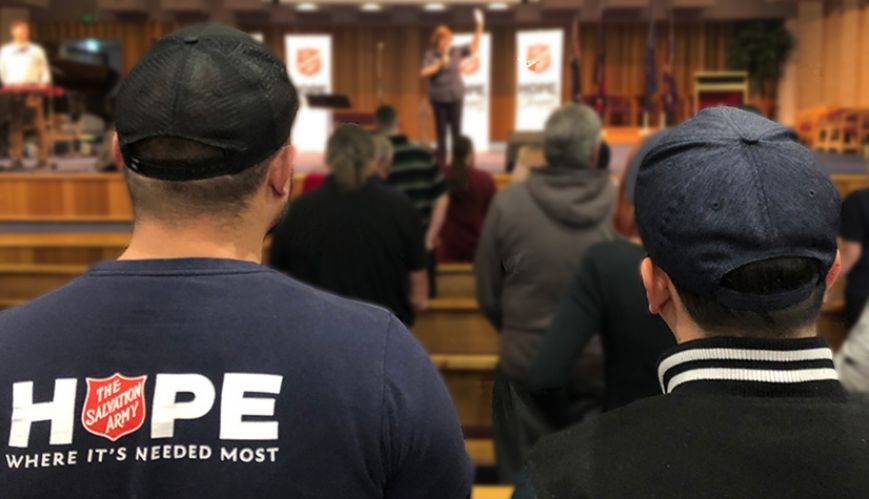 Dusting off the uniform debate

Where do you wear your Salvation Army uniform?

In the musical Come From Away, The Salvation Army is referenced quite a bit in relation to its role in helping stranded passengers in Newfoundland, Canada, following the diversion of flights on 11 September 2001.

When speaking about his recollections of the time, one of the characters, Garth, says, “We rarely use them, but everyone’s dusted off their Salvation Army uniforms to welcome these people.”

O, how we laughed, appreciating the ridiculousness of putting on your Army uniform because that’s what you have to do to be ‘The Salvation Army’!

With Sunday meetings at corps around Australia resuming face-to-face, aren’t we just doing the same thing? And have we indeed been doing this for quite some time?

Have our uniforms become our ‘Sunday bests’, so when we get together, where we know each other, we can feel like we belong by wearing the ‘right’ clothes?

Some might say that our formal uniform lets people know who we are and what we stand for, but surely there’s more to us than that. If you were to ask someone at the supermarket who the Salvos are, it’s unlikely that uniforms would come into the top five. So, why are we so intent on wearing them on a Sunday morning? Isn’t making sure we can be the hands and feet of Christ, or Christianity with our sleeves rolled up, more integral to who we are as a movement than keeping the tradition of what we wear when around like-minded friends?

Is the uniform integral to who we are as The Salvation Army, or is it more a missional tool that can be used strategically to best effect? We wouldn’t employ the same tactic and tools when working with children as you might when working with a group of adult men. Yes, some things would be similar. The essence of what we’re trying to achieve would be the same, but what would work in one setting wouldn’t in another. This common-sense approach to using the formal uniform as a tool in the correct setting is something we should strive for.

Of course, many expressions of our movement have already gone to this point; however, visit a large number of corps in our territory and you will still find folks popping on their uniforms on a Sunday morning out of duty, service, tradition or habit. Is this the best use of this missional tool, or are we just using the knife to mix the cake batter because that’s the way we’ve always done it?

So many corps have had online church services during 2020 and into 2021. If the uniform is so fundamental to who we are as Salvationists, how many of us wore them while sitting on our couch at home participating in online church? Or did we not wear it because other people from our corps weren’t around to see that? Even before 2020, how many of us wore our uniforms other than the couple of hours we spent at the hall on a Sunday morning? Or quickly took them off to go to the supermarket on the way home from the meeting because we didn’t want to be confused with an airline pilot or security guard?

Best use of the uniform

The traditional Army uniform is also not practical for the many different jobs that Salvos take part in every week. For Salvationists, full uniform is often expected week in, week out in many Army expressions. But why?

Surely t-shirts and comfortable clothing are easier when playing games and interacting with kids, moving chairs for activities, or even eating a cream sponge with icing sugar on top for morning tea. Elijah Cadman’s call in 1878 that he “should like to wear a suit of clothes that would let everyone know I meant war to the teeth and salvation for the world” never said anything about the type of clothes. And when you look back at those Army pioneers with messages blazed across their jumpers, it was clear what they stood for. But can we say the same about our current uniform?

To do away with formal uniforms entirely would be a mistake for some roles within the Army. Of course, uniforms are much better suited to the corporate world rather than a t-shirt. Yes, the dignity that a funeral or wedding requires calls for a formal uniform. But for the majority of Salvos, these events are few and far between. In contrast, a Red Shield t-shirt or badge that can be attached to any garment is of more practical use on a weekly/daily basis and is much more recognisable to the general public.

During the past year, we’ve been taking note of the fundamentals of what makes us who we are. From programs to Sunday mornings, this has been an opportunity to reset and realign what we do, what we care about and, indeed, what we look like. If Elijah Cadman made that same claim today about wanting clothes that will let people know he means salvation for the world, would what we wear on a Sunday morning fit the bill?

So, what will you be wearing next time at church?

Scott Mangos is a soldier of Delacombe Corps in Victoria