You are here: Home › Viewpoint › Everything And Nothing Its Loud And Clear

Everything and nothing - it's loud and clear Everything and nothing - it's loud and clear

“That boy will either become a preacher or a politician!” – what was said about Major Peter McGuigan when he was a boy.

When I was three years old, my parents were in charge of The Salvation Army at Holland Park, a southern suburb of Brisbane, Queensland. My only memory from Holland Park is that although our home was small, we had a large front yard.

With a friend who lived next door, we would play all kinds of games in that front yard. Apparently, I would yell out all kinds of utterances at full velocity, like pronouncing edicts to the world. So much so, that my friend’s mother once said to my mother: “That boy will either be a preacher or a politician!”

I’m glad her first prediction not only became my vocation and calling but also my great love. I’m glad I am aligned with the values of the Kingdom of God and the life-transforming message and person of Jesus. I’m glad I am not bound by party politics but free to express, both in word and deed, the great joy and liberty there is to be found in knowing and following Jesus.

To be frank, I’m over “politics” per se, in all its invasiveness. Not only the bittersweet political maneuverings and one-upmanship of governments and oppositions, and endless nation-exhausting left versus right fighting, but politics as it finds its way into all kinds of spaces, particularly relationships between people and groups of people in every sphere of society. It’s like you can’t breathe without thinking politically.

Email etiquette today, for example, is a big deal because inadvertently we don’t want receivers of our messages to misunderstand or misconstrue the meaning behind our words, or even use our words against us. I’m more and more inclined these days to just pick up the phone so people can get the benefit of tone of voice and graciousness of spirit, especially when dealing with tough subjects. We have become so politically-minded it is becoming mind-numbing.

All this can get a bit much during a period like the current global pandemic when all we want is for people to be kind and when a fresh awareness of the importance of our relationships has dawned. The literal meaning of the word ‘politics’ is ‘of, for, or relating to citizens’, something Jesus in the purest sense of politics was definitely about all of the time – what was best for the people around him. 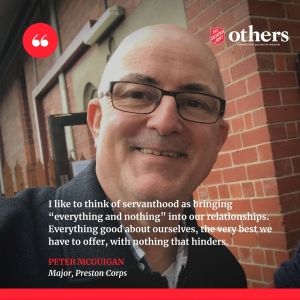 In fact, it might help us to note how Jesus, despite being under enormous political pressure throughout the years of his ministry, did not buckle under the strain. This was true when under temptation himself to chase power and status (Luke 4:1-13). But it was just as apparent in his daily ministry when his life was often at risk (Matthew 21:46, Mark 11:18, Luke 22:2) and ultimately was taken because he refused to stop confronting injustice and showing humankind a godly way of living and being.

Jesus described this countercultural way of life as servanthood. “The greatest among you will be your servant” (Matthew 23:11), he once told his listeners. And, “I am among you as one who serves” (Luke 22:27). Contemporary writers on leadership have picked up this nuance too. Robert Greenleaf’s 1977 book Servant Leadership, for example, has become a classic text.

I like to think of servanthood as bringing ‘everything and nothing’ into our relationships. Everything good about ourselves, the very best we have to offer, with nothing that hinders. No chips on the shoulder (let’s be serious about knocking them off), no baggage from the past (let’s be serious about letting go of past hurts and setbacks), no superior or inferior attitudes, no inattentiveness, free from a suspicious mind, fully present. Love and respect for the other is at the heart of servanthood, even when facing conflict and adversity and difference of opinion.

As Jesus suggests in his statements, the onus is on human beings to set the tone of their culture. That’s true for families, communities, cities, organisations, corporations, churches, states, nations and the world community. A good and global dose of servanthood, with all of its nutrient qualities, will help us move beyond dysfunction and breakdown in our relationships to an energising health, wholeness and spirit of cooperation.

God knows, we need a servant state of mind!

Major Peter McGuigan is Corps Officer at The Salvation Army Preston in Melbourne. He holds an MA (Writing) and is a former President of the Australasian Religious Press Association (2008-2011). This piece was originally published on the Christian Today website.