You are here: Home › Viewpoint › Now That We Know What Will We Do

Now that we know, what will we do? 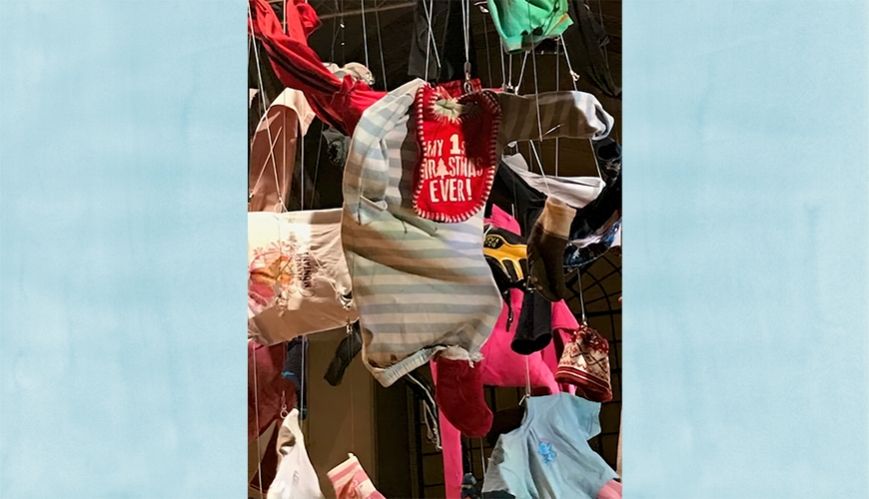 Now that we know, what will we do?

An installation artwork of clothing discarded by refugees at the Lesbos camp in Greece aimed to highlight the plight of thousands of refugees fleeing war and persecution.

I attended a showing of the documentary called Syria’s Disappeared at St James Piccadilly, United Kingdom, back in 2018.

In addition to the showing of this documentary, there was an installation artwork by Arabella Dorman called ‘Suspended’. This artwork aimed to highlight the plight of thousands of refugees – men, women and children – fleeing war and persecution.

As people entered the Sanctuary at St James Piccadilly, I watched as each one raised their eyes to look at the clothes. Cameras came out and pictures were taken, yet sadness and grief filled people’s faces.

Fleeing for their lives

You could see baby shoes, women’s scarves of many colours, t-shirts, track pants, gloves and socks. These were not just anybody’s clothes; they belonged to people who had to flee for their lives, seeking safety and taking only what they could wear.

One particular item caused a lump to form in my throat. It was a baby outfit, with the words ‘My first Christmas ever’ on it. I thought about the baby who wore it. Was it their actual first Christmas, or was it an outfit a charity gave them? Did this baby get to see another Christmas? Where are they now? How did this baby get to the Island of Lesbos? What was the journey they took? How long did it take?

Many different people sat under these clothes – white, black, Muslim, Christian, students, lawyers and survivors. I joined in the conversation with the small group that stood around me. A tech student was here because he helped develop a project with Google to make a translation app for refugees in Germany. This young man was deeply struck by the art display and kept commenting on how it smelt like baby clothes and made him think of his small nephew. He had tears in his eyes. There was no smell, yet he commented at least three times on it and was visibly shaken by the display.

Behind him was another student. She was studying International Community Development and was overwhelmed with her studies and which direction to go with her thesis. She wanted to learn more about refugees and their plight but didn't know the direction to take. Next to her was a Human Rights lawyer who had been to Syria and could only speak lovingly about the people of Syria and their hospitality. All were deeply affected by the display of clothes.

Arabella spoke about the display being her passion project, her cry for justice. She told us that, now that we had seen it, we must bear witness and not let the people of Syria be forgotten.

A promise to God

Stories of refugees cycle in and out of the news and often become a distant thought. Refugees have often become people we fear and don’t want in our country. I can’t help but be angered and think how dare we reduce God’s children to afterthoughts or to people who do not deserve the same rights as us.

I don’t yet know how I can genuinely fight this injustice, but I promised God that night that I would not forget about the plight of refugees, and I haven’t. I will stand up against those that want to refuse to help them, and I will tell their stories. I know many stories of refugees fleeing their homeland, and I will not let these stories go. No one will be able to say to me, “you knew and did nothing”.

A refugee survivor stated: “If we cannot tell our story, we may as well die.” I know that I need to tell their stories and that I need to continue to bring awareness to this crisis. How will you respond?