You are here: Home › Viewpoint › Regularly Reflecting On Who William Booth Was

Regularly reflecting on who William Booth was 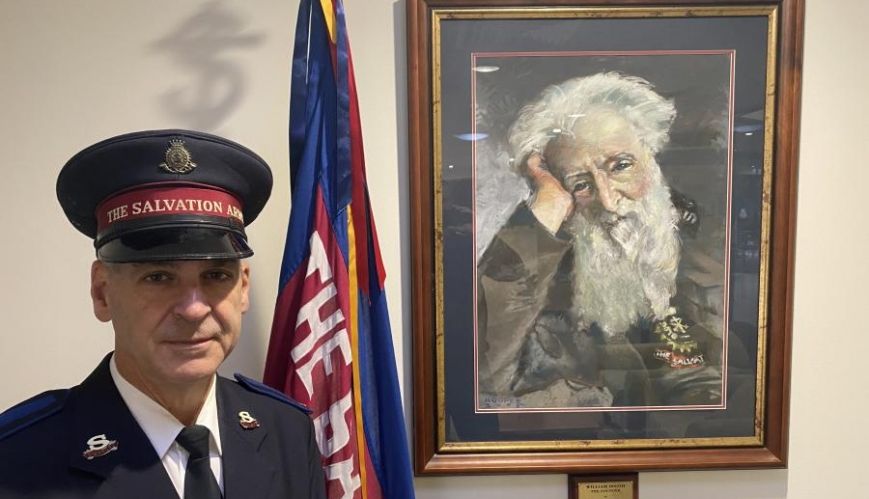 Regularly reflecting on who William Booth was

Darryl Whitecross with The Salvation Army Stafford flag in the foyer of the corps facility where this 2003 painting of Wiliam Booth by artist Gordon Hooper hangs. The painting is dedicated to the Hooper family, which has been part of the Albion and Stafford faith communities for several generations.

Having been born into a Salvationist family and gone through every level of traditional involvement and program in The Salvation Army, there has been no escaping knowing who William Booth was.

As a junior soldier, our instruction, study, reflection and award work involved not only memorising the books of the Bible, but also knowing who William Booth was.

Year in, year out, as junior soldiership morphed into senior soldiership and regularly singing all seven verses of O Boundless Salvation (any person with yellow red and blue blood flowing through their veins knows this is the Founder’s song), there was no escaping who William Booth was.

We only really know him from the grainy, black-and-white photos, the scratchy recordings and the famous telegrams he sent - but is that really who William Booth was?

Like Jesus, who calls us to take up our cross daily and follow him, it can be difficult to do that in a modern society. Is it any easier now to be seeking justice for the hungry, homeless and marginalised despite difficulty and opposition, as, in his day, William Booth was?

As a young corps cadet, I enjoyed reading our orders and regulations. I wondered then, as I do now, how many men wore a singlet (and how many soldiers sleep at night with the windows open six inches) as the old O&Rs required. I wondered, when I saw his photograph, if William Booth was.

As 2 July looms again, I continue to wonder who the real William Booth was.

I get the feeling he was a take-no-prisoners kind of man yet compassionate; demanding yet benevolent; fiery yet gentle. Is that really who William Booth was?

I would have loved to have met him and heard his messages firsthand; to experience how he went about his ministry and mission. The fire of the Holy Spirit was in him and he burned with the principles of the Great Commission: go …. for others! Was that who William Booth was?

He has given the world a legacy that is now an internationally recognised church and charity. Would he have been proud of our four Australia Territory pillars: caring for people; creating faith pathways; building healthy communities; working for justice; and caring for people? I’m sure that’s who William Booth was.

What about our territorial vision: Wherever there is hardship or injustice, Salvos will live, love and fight, alongside others, to transform Australia one life at a time with the love of Jesus? His “I’ll fight” message says that’s who William Booth was.

A couple of years ago, the system of governance in Australia was quite different and we were divided into two territories. We are now one. It was not an easy transition. A lot of territory-specific culture had been built up since the fledgling days of the Army on these colonial shores that was difficult for our leadership to break through and work through. How leaders bring about such change is quite different today. Modern society says leadership can’t really have a take-no-prisoners approach; be demanding and fiery, as William Booth was.

Our movement has had to take the tough decisions; to reign in our spending; to look closely at the core of our existence and, in many ways, return to our roots and be true to the vision in the beginning and reflect who William Booth was.