Two years ago this Christmas, Raewyn Hargraves (pictured) went shopping at her local supermarket and her life began to change.

It started with the sight of a Salvation Army officer standing beside a Christmas kettle, collecting for the needy in the community.

Her first thought was to make her own contribution. As the officer spoke to other people around the kettle, she checked through leaflets and left.

She didn’t get to speak to the officer. But on the walk home, she saw a sign that said The Salvation Army.

It was pointing to a building just around the corner from where she lived. “Good heavens,” she thought. “Is this a sign, as in a sign for me?” Even before she saw the officer and the sign that day, Raewyn had been thinking about the direction of her personal faith for some time.

She wasn’t a Christian, but something or someone was prompting her to think about life more seriously.

The following Sunday, she turned up at The Salvation Army Wollongong Corps, on the NSW South Coast, only a few hundred metres from her home.

As she entered the building, people were friendly. Some spoke to her. During the morning meeting, she received a personal welcome – by name – from the platform.

“This is amazing,” she thought. She went back the following Sunday. “A lovely lady called Marion (pictured right, with Raewyn) took me under her wing. She watched out for me the next few Sundays.” 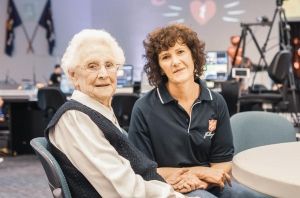 The officer she saw at the supermarket was leading the first meeting she attended. It was then-Captain (now Major) Phil Inglis, who leads the Wollongong Corps with his wife Rebecca.

“I loved the meetings and the people,” she says. “I loved being in God’s house, I loved the people, the sermons, coffee, the band and songsters, the beautiful coloured cross on the wall, opportunities for giving ... I loved it all.”

Raewyn joined a life group (Bible study). She studied the Christianity Explained course. “It was then,” she says, “that I realised that what we do, we do through the grace of God. It’s all about the grace of God.”

For 50 or so years, she had never known about God’s grace. Raewyn was born and raised in Wainuiomata, a suburb of Wellington, New Zealand. She was the youngest of five children.

The family did not attend church. When it was time for high school, Raewyn convinced her parents to allow her to attend a Catholic college.

“I wanted to go to the Catholic college because my best friend was going and it meant that I didn’t have to take Japanese (at another school),” she says. “Religious education was my favourite subject, but I didn’t feel any connection to God at the time, and I didn’t retain anything that I learned.

“What I saw taught is not what I saw lived. It did not leave a good impression. I suppose that I was present, but didn’t take it on board. That was just as much about me as it was about others. I had no image of God; no relationship with him, at all.”

Raewyn moved to Sydney in 1986. Two of her sisters were already living in Australia. She became an Australian citizen in 1990, although still retained New Zealand citizenship as well.

She moved to Wollongong in October 2016, one month before her supermarket experience. After joining a life group and studying Christianity Explained, she became part of the Wollongong Corps English conversation classes, helping refugees and newcomers to Australia better understand English.

Making visitors welcome was important to her – from personal experience – so she joined the corps team welcoming people at the front door on Sunday mornings. She attended corps camps and women’s weekend divisional conferences. Raewyn has now been on the other side of the kettle, collecting for The Salvation Army at the same supermarket last Christmas and at Red Shield Appeal times.

“It’s the best two hours a girl can spend having fun and engaging with the community,” she says. “I think that I have always been interested in the concept of faith and I’ve envied those who had it. I can see now that the things that have been happening to me over the past two years were part of a plan for me. I can see now that I am not alone in this world. I feel that I have lived a Christian-sort-of life. I have always assisted with time and money, but there was no relationship with God.

“It’s amazing to me now that I can talk with God without going through a whole lot of church rituals and traditions. I love that. I have a personal relationship with God now. Communication is immediate.

“I am still taking baby steps. I still don’t know how everything in the Bible fits together. I can’t quote verses like other people can. But I know it’s not all about what I know; it’s what’s in my heart that counts. I think the direction has always been there for me to come to faith and I can see it, now, in that encounter with The Salvation Army at the supermarket.”

Her experience with The Salvation Army has convinced her that God has a place for her in his world, after all.

“I had always felt that I was never good enough. I had always had issues with my image. I had that from childhood. But I am becoming aware that I am enough and that it’s because of God’s grace that I can feel good about myself.”

This awareness has come through discovering that ordinary people like her have done extraordinary things through the grace of God.

“I saw Salvation Army people in Papua New Guinea working under terrible conditions, yet they had big smiles on their faces as they did their work. I saw photos of a young woman officer from Wollongong who, with her husband, gave her life to serve in Papua New Guinea. She died while serving there. But she gave her life for those people. And it’s the everyday stuff The Salvation Army and others do that moves me.”

Each week, Raewyn commits herself to providing groceries for welfare workers at the Wollongong Salvation Army to give to needy community members.

As a job, she provides in-home care to elderly people. Her next step in The Salvation Army, she says, is soldiership.