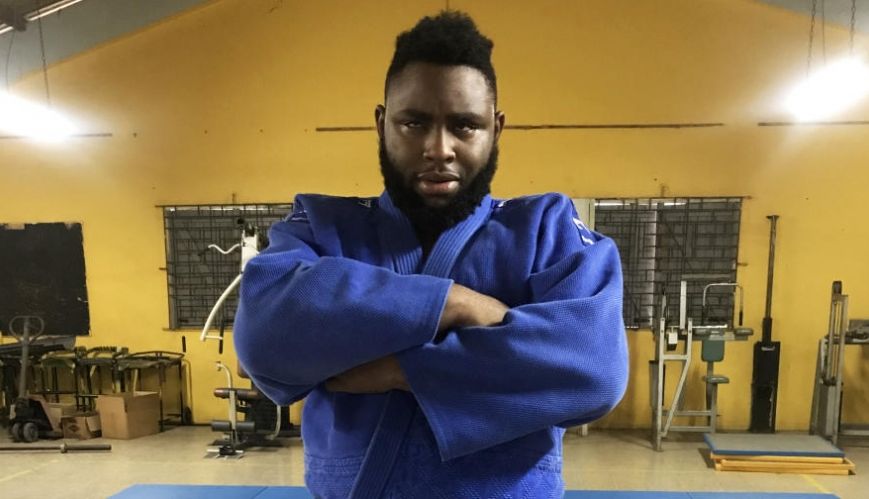 Visually impaired Jamaican judoka Theador Subba is fighting all the way to get to the Paralympic Games in Tokyo.

Old school chums Alberto ‘Bertie’ Campbell-Staines and Theador ‘Theo’ Subba are set to be reunited in Tokyo when they take part in the 2020 Paralympic Games.

Bertie and Theo were young boys when they attended The Salvation Army School for the Blind and Vision Impaired in Kingston on the Caribbean island of Jamaica about 20 years ago.

Alberto said Theo was in the classroom next door when they were at the school – he in Year Two and his friend in prep: “We would all go swimming together as well as go to Sunday school.”

Brisbane Salvationists Paul and Julie-Anne Staines were teachers at the school between 2000 and 2003 when they met the two boys. Paul said Theo was a “vivacious, four-year-old boy in prep”.

Theo said he remembered spending some school holidays with the Staines family instead of returning to his home and his mum at Westmoreland in the east of the island and swimming lessons with Julie-Anne and Bertie.

Another of Theo and Bertie’s former schoolmates is Carl Moore, who works at the school as a chef during the day and as a “house father” overnight at Army’s The Nest orphanage he, Theo and Bertie lived at. He attends the Havendale Corps in Kingston, which Theo considers his home corps.

Carl said he had been at The Nest all his life, having lived there from the age of one until 19 and now works there. He got married in March.

He said he had great memories of the three “hanging out” together and enjoyed catching up now with the others when he could. Although he was a few years older, the trio used to “hang around” the Staines house and watch television and play games.

Theo now lives in Montego Bay but, whenever in Jamaica, he attends the Havendale Corps and the school where he helps the children with their homework and plays soccer with them and some track and field events. “He motivates the kids. He has a nice spirit, a nice attitude,” Carl said.

The Staines fell in love with Alberto and eventually adopted him when he was nine and brought him to Australia when they returned in 2003.

Both boys went their separate ways academically but have remained linked as elite sportsmen, having achieved success at an international level – Bertie for his adopted Australia and Theo in Jamaica. A Staines family snapshot of Theador Subba with Santa at a Christmas party at The Salvation Army School for the Blind in 2002.

Theo and Bertie are scheduled to compete under the Jamaican flag, albeit in different sports and the first time they have competed in the Paralympics. Bertie is a 400m runner, and Theo is to compete in the judo events.

“We think this is amazing: two alumni of a Salvation Army school at the Paralympics,” Paul said. “It is absolutely incredible that two students who attended [the school] at the same time are about to make their debut at the Paralympic as the first-ever first B3 and T20 athletes to represent Jamaica.”

Carl said it was no surprise that Theo was to represent Jamaica in judo: “As a small little boy [Theo] liked wrestling. He was a few years younger than me, but he liked to wrestle with me. I would say: ‘I don't think you could take me because you’re too small’ and he was always saying: ‘I’m going to get older.’

“I used to pick him up and put him on my neck because he was so small but, since school, he's gotten so big and so muscular,” Carl said.

He said it was “a big achievement” for the school to have Theo compete at the Games: “No one [from the school] has reached this level before. Even if he doesn’t win a medal, he is making history. We will be his biggest cheerleaders.”

The Havendale Corps in Kingston shares the Army’s property, known as the Havendale Compound, with the school for the blind and the orphanage. It is also the corps the Staines attended when they lived in Jamaica.

Carl said Theo was “a good drummer” and, before he left Kingston to attend university, he was part of the praise team. On his occasional return visits to the corps, he gets to play the drums.

Major Marie Davis, the Corps Officer at Havendale and Kintyre Corps, bid Theo “all the best” in his Games events.

Theo was the first visually impaired Jamaican athlete to compete and win a medal in judo – a bronze in the over 100kg class – at the 2019 Para Pan-American Games in Lima, Peru. He also has competed in javelin events and has represented Jamaica in visually impaired cricket tournaments in the Caribbean.

Theo, an undergraduate Bachelor of Science Public Policy and Management student at the University of the West Indies, is quoted as having said the passion to represent Jamaica, the will to succeed, and the hope he would be an example to others, inspired him “to pursue the two Js and to do well”.

The Army is the sole provider of a school for blind and visually impaired children in Jamaica, with up to 110 students aged 5-18 on campus. The school was established in 1927 and shared a site with other Army ministry expressions, including a children’s home, a residence for blind adults, a corps and a basic school.

Despite wanting to realise his dream, two weeks out from the opening ceremony for the Paralympics and Theo does not yet have the money for his airfare. In contrast, Bertie is “on the plane” to run for his country of birth because his family can fund his trip.

Paul said that other competitors in the Jamaican Paralympic Games team, such as Theo, were not so blessed.

Unlike the able-bodied athletes competing at the Olympic Games, Paralympians from developing countries had to “pay their own way”.

“In most developing countries, there is no government funding for Paralympics athletes and financial support for people with disabilities is very limited, if not non-existent,” Paul said.

Bertie said he had been blessed that “so many people have helped me in the past that I’m in a position that I’m able to fund myself but my friend, Theador Subba, isn’t in the same position.”

For further information on how to help Theo, log on to https://jamaicaparalympic.com/donations-support-the-jp