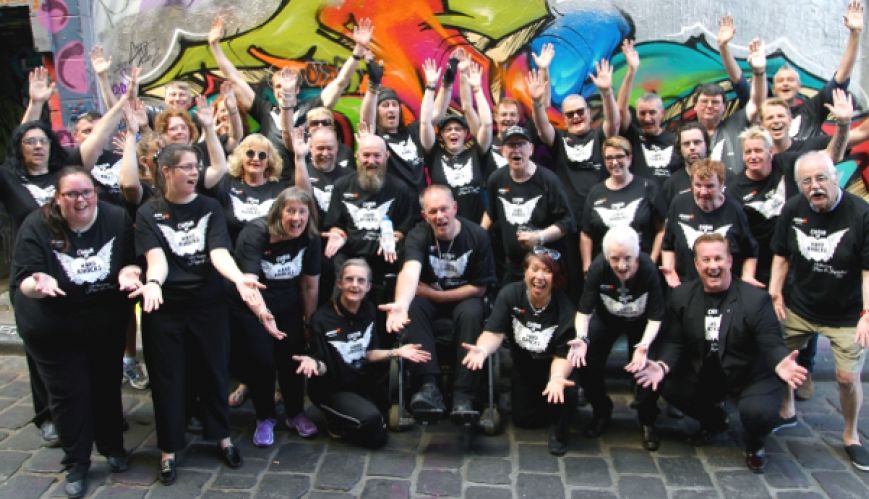 The show goes on for the Choir of Hard Knocks who celebrate their 10th anniversary this year. Photo: Matthew Jones

Unlike the captains of industry, Jonathon Welch will never be rich.

But this opera singer has impacted on the world of homeless people and those down on their luck and enriched so many lives that he is wealthy beyond compare in the things that matter.

If the name Jonathon Welch doesn’t strike an immediate chord, link it to The Choir of Hard Knocks—which was the subject of a powerful and illuminating television documentary series several years ago—and it will click into place.

Many of Welch’s choir members have been regulars at 614, The Salvation Army’s community outreach centre in the heart of Melbourne, and a few have gone on to become soldiers (members) of the Salvo corps (church). So what Welch does sits well with, and alongside, the work The Salvation Army does to improve the lives of people who need a helping hand.

While Welch has enjoyed his own impressive operatic career, it’s his passion for improving lives via music that has made him famous.

His inspiration for establishing The Choir of Hard Knocks came during a 2001 trip to North America when he heard of the Montreal Homeless Men’s Choir in Canada and decided to create the Sydney Street Choir, which is still singing today.

There was also another very personal reason he took this path.

‘My sister, aunt and niece all had mental health issues, and I wanted to do something to honour them through my passion for singing, and simply bring some joy each week to those who are marginalised and vulnerable,’ Welch tells Warcry.

But can singing weekly in a choir really make a difference to people who have very little in their lives? Welch is adamant that it can, and does.

‘Over the past decade, many of the original Choir of Hard Knocks members have moved onto part-time and full-time study and employment, including Dan who was on the streets and struggling with addiction issues when he came to the choir in 2006.

‘Now he has completed his masters in organisational psychology and is working, thanks to the confidence and self-esteem that the choir gave him,’ a proud Welch relates.

But those 10 years haven’t all been sweetness and light. Back in 2009, the choir was rocked by a dispute over the income from its CDs, DVDs and concerts, which saw Welch and several of his singers split from the choir’s charity partner RecLink in 2009.

‘There was also the loss of several of the original members,’ he says. ‘But the ongoing commitment from the choir members, musicians and volunteers is an extraordinary feat, given many of the members’ personal health issues,’ he says.

Welch is determined that the choir remains a constant bright spot in the lives of its members, and gives them what many of us take for granted and what they have missed out on.

‘The sense of family and belonging that they have through singing together has kept them bonded through good times and bad. The choir members are truly inspiring and the reason I get up each morning and continue to do this work,’ he explains. Opera Singer Jonathan Welch is a passionate advocate the homeless through the Creative Arts.

In 2008, Welch’s work was recognised when he became the Victorian and Australian Local Hero of the Year. In 2009, he received an honorary doctorate from Queensland’s Griffith University, and was made a member of the Order of Australia in the Queen’s Birthday honours list.

Welch’s operatic career included touring Australia in The Pirates of Penzance in 1983, before embarking on further opera training in Brisbane.

He joined Opera Australia on a five-year contract in 1993, singing alongside Dame Joan Sutherland at the Sydney Opera House in The Merry Widow, and playing other major tenor roles with the company. He has recorded CDs with the operatic trio Tenor Australis and in September will return to the stage of the Sydney Opera House in the opera Pecan Summer.

Once the future of the Choir of Hard Knocks was assured, Welch turned his mind to expanding his vision to help the homeless through the arts.

Now in its fourth year, The School of Hard Knocks provides creative courses and groups for people in Victoria, New South Wales and Queensland.

‘The school facilitates a range of arts programs across Victoria, Brisbane and Port Macquarie to more than 700 participants weekly, delivering over 50,000 contact hours a year of tuition and performance opportunities,’ Welch says.

Like many arts initiatives, money is a problem, as, except for Queensland, there is no government funding. However, Welch has a fervent hope of changing that situation.

‘My goal is to change government policy,’ he says, ‘as our research will soon substantiate the cost savings of our programs to government and the community, and show that the arts can build positive mental and physical wellbeing across all sectors of the community.’

In the meantime, Welch has big plans for expanding the reach of the Choir of Hard Knocks with the moving composition Street Requiem, co-authored by Welch and School of Hard Knocks faculty members Dr Kathleen McGuire and Andy Payne, which commemorates all those who have died on the streets.

In September this year he is taking a choir of 120 and teaming up with American singers to perform it at New York’s iconic Carnegie Hall, with international opera star Frederica Von Stade.

Passionate and dogged in his determination, Jonathon Welch and his School of Hard Knocks are proof that good choirs, like good music, don’t have an expiry date.

The 10th anniversary Hope and Inspiration Tour by the Choir of Hard Knocks is at Sydney Opera House on 24 July and Melbourne’s Hamer Hall on 14 August. www.choirofhardknocks.org.au