Nordic congress led by Chief of the Staff and Commissioner Peddle 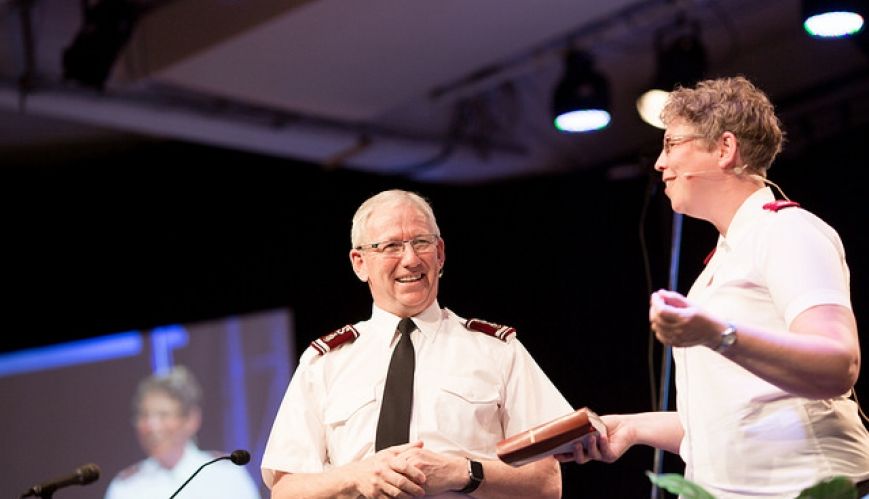 Nordic congress led by Chief of the Staff and Commissioner Peddle

Commissioners Brian and Rosalie Peddle were the main speakers at the recent Nordic congress in Oslo.

The Chief of the Staff (Commissioner Brian Peddle) and Commissioner Rosalie Peddle (World Secretary for Women's Ministries) were the main speakers for a recent Nordic congress that was attended by people from seven countries across three Salvation Army territories.

Delegates from the Norway were joined by Salvationists and friends from Greenland, Denmark, Sweden, Latvia, Iceland and The Færoes. Many arrived for the congress, held at the end of June, in time for two Thursday night pre-congress events – a 'Brasscafé' at Oslo Temple Corps (church) and a historic Salvation Army walk starting off at the old training college – or War College as it was known.

Friday morning kicked off with a meeting for the over-60s, followed by officers councils. The words of former General John Gowans: 'We are here to save souls, grow saints and serve suffering humanity,' proved a powerful theme for the many officers present.

In the evening, seven lieutenants were commissioned in the opening meeting. The main theme of the congress, 'Transformed', was referred to by the Chief of the Staff in his Bible message, as he challenged the new officers to be transformed to serve. The meeting was followed by a time of celebration, praise and thanksgiving with the Norwegian Territorial Band joining forces with Oslo Temple Band, several soloists and a united gospel chorus.

The final late-night event on the first day was a traditional Scandinavian-style singalong with guitars, piano accordions and string basses. The congregation was on its feet more than in its chairs!

On Saturday morning Commissioner Rosalie Peddle was the main guest at a women’s breakfast, where she was interviewed by Commissoner Vibeke Krommenhoek (Territorial President of Women's Ministries, Norway, Iceland and The Færoes Territory).

Later they joined the other leaders, Salvationists and friends from across the Nordic countries in a march of witness through Oslo city centre. Participants were encouraged by the warm response of bystanders, particularly the crowds that gathered for the open-air meeting.

The weekend continued with meetings, festivals, presentations and special gatherings for children and young people. In the final meeting on Sunday, the leaders of the Norway, Iceland and The Færoes Territory, Commissioners Dick and Vibeke Krommenhoek, were given recognition and thanks as they bid farewell to the territory and headed for new challenges in The Netherlands, where they will take up an appointment as corps officers.

Throughout the congress the Chief of the Staff and Commissioner Rosalie Peddle shared the platform with leaders from the three territories present (the hosts, the Sweden and Latvia Territory and the Denmark and Greenland Territory), focusing on different aspects of transformation: transformed to serve; transformed to fellowship; transformed to holiness; and transformed to go out and make disciples. Every meeting provided glimpses into the lives of the territories represented, with personal stories highlighting moments of engagement through ministry. The theme, 'Transformed', was made evident through the lives of people who had encountered Christ and offered for full-time service.

Children and youth delegates to the congress took up the challenge and, as the events in Oslo drew to a close, they headed off for their summer camp under the heading 'Do something!' Their programmes pulsated with energy and passion as significant numbers gathered. The auditorium was filled to capacity as everyone joined together for the final meeting.

During the congress, many people knelt at the mercy seat – alone, in couples or in groups – seeking the transformation of lives, relationships and corps. At the end of the congress, the prayer of delegates and leaders is that the many blessings shared will continue to strengthen and challenge the Salvationists and friends of the Nordic countries.