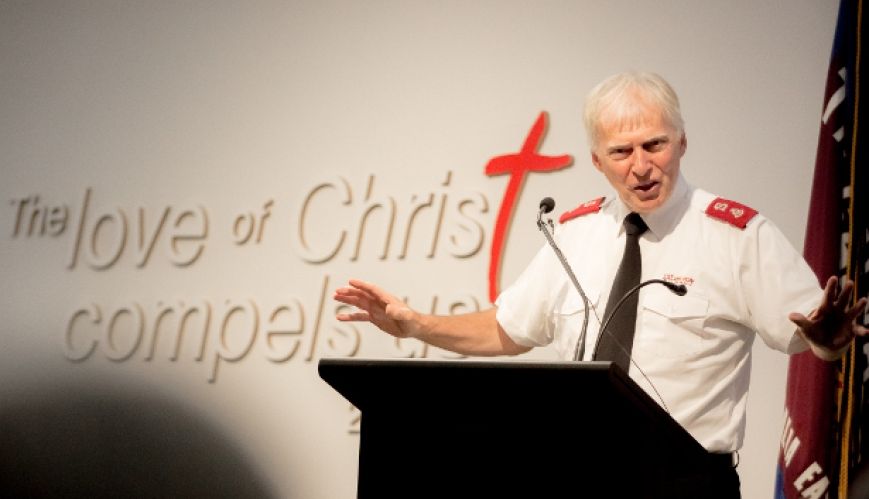 Major John Read speaking on the importance of Catherine Booth for the contemporary Salvation Army.

Catherine Booth has been described as “the most extraordinary woman of the 19th century”, yet many Salvationists have no idea why, says Major John Read, author of a newly released book on the The Salvation Army’s co-founder.

Speaking as the guest presenter of Booth College’s Frederick Coutts Smith Memorial Lecture, Major Read created a dynamic and inspirational picture of a woman who was not only a powerful evangelist, passionate social reformer, effective campaigner for the rights of women, but the theological genius behind the movement she co-founded with her husband William.

In an energetic and engaging 50-minute public lecture at Territorial Headquarters in Redfern on Wednesday, Major Read, currently the UK’s Territorial Ecumenical Officer, spoke about the legacy of Catherine Booth and the impact a rediscovery of her thought might have on the contemporary Salvation Army.

“I taught doctrine for about 10 years, primarily from The Salvation Army’s Articles of Faith, he said in an interview after his presentation. “But I have come to realise that the core of our faith is not found in our doctrine but in the thought of Catherine Booth. If you want to know why we both evangelise and engage in social action, it is found in her understanding of salvation. She understood salvation as restoration of the whole person, and, if that is true, then as Christ in the world why would our mission not work itself out in social action?”

He said that the doorway to understanding her thought was her understanding of salvation in which, through Christ, the image of God in fallen humankind is restored. This was the powerful impetus behind both her social activism and the centrality of holiness in her thinking.

More than 50 people attended the lecture and afterwards engaged in a vigorous Q&A session with Major Read, who spent six years studying Catherine Booth’s writings for his doctoral studies.

Major Read recently released his book Catherine Booth: Laying the Theological Foundations of a Radical Movement.
He will be speaking again today (Thurs 21 July) at Auburn Corps, 166-170 South Parade, Auburn, from 10.30-11.45am.