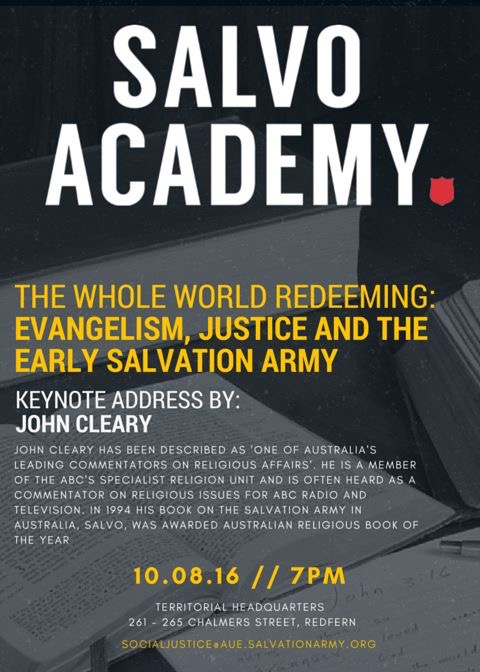 A partnership between The Salvation Army’s Social Justice team and Stanmore House has birthed a new training initiative known as Salvo Academy. Territorial Social Justice Coordinator, Casey O’Brien Machado, has come up with a way to educate Salvationists about the Army’s positional statements in a creative and engaging way.

“We often discuss the importance of educating soldiers, making sure we’re all on the same page as an Army, which is where the academy idea came from – that it’s actually a training ground. So it’s ongoing education in what we believe,” Casey said.

Salvo Academy has been running university-style lecture and tutorial sessions and panel discussion at Stanmore House in Sydney once a month since March, focusing on a different topic each time. “The Salvationist and Alcohol” and “Christianity and Mental Health” were just two of the topics on offer in the first semester. The sessions are also live-streamed and are open to all age groups.

The speakers and discussion facilities for each session include Army officers, soldiers or employees who are both educated and passionate about specific ministry areas. “We really want it to be educated discussion led by people who know what they’re talking about,” Casey said.

So far, Salvo Academy has received positive feedback about the first semester’s interactive sessions and would like to see Salvationists equipped with the knowledge and tools for ministry work in their local communities. “I want to see a Salvation Army full of people who are certain of what they stand for and understand ways they can love out the kingdom of God today,” Casey said.

The next Salvo Academy session is on Wednesday 10 August at 7pm. Religious commentator, John Cleary will be speaking on “The Whole World Redeeming: Evangelism, Justice and the early Salvation Army”. This seminar will be held at Territorial Headquarters in Redfern. For further information about Salvo Academy, email socialjustice@aue.salvationarmy.org