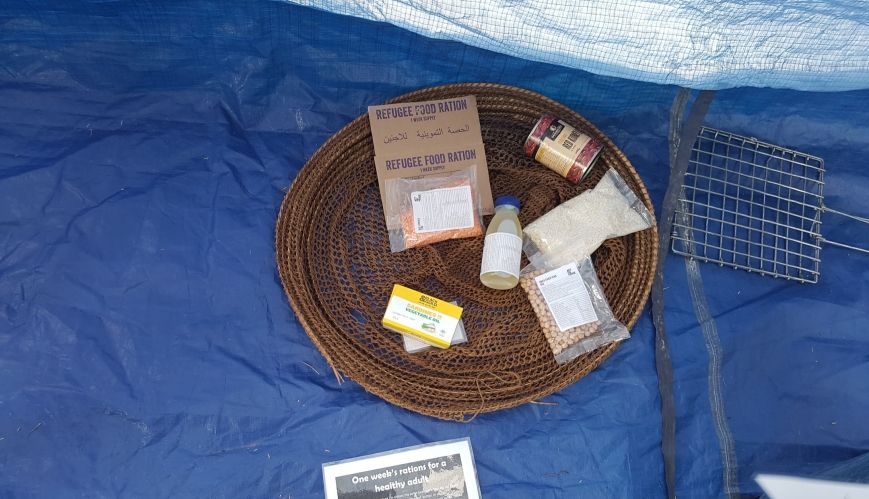 An example of one week's rations for a healthy adult.

A group of Salvation Army volunteers, employees, officers and corps members experienced the kind of conditions facing people in refugee camps at an interactive exhibition run by Auburn City Council on 6 August.

“Refugee Camp in my Community” is a simulated refugee camp, held at the Auburn Centre for Community, which aims to educate Australians about what it’s like to flee a country and seek out safety at a refugee camp.

Inclusive Australia, The Salvation Army’s multicultural ministries program, organised refugee camp tours for those connected to the Army. The tours are led by former refugees or asylum seekers who share their experiences of living in refugee camps. World Food Program rations for a family of ten for one month.

An Inclusive Australia volunteer, Arian Yeganeh, took part in the tours over the weekend and said his eyes were opened to the lives of refugees. In particular, Arian was surprised by the large number of countries refugees and asylum seekers come from when seeking asylum in Australia. “Mainly curiosity and understanding other people’s perspectives. In social circles you don’t often come across asylum seekers,” he said.

The interactive exhibition gave visitors a small taste of what it’s like to live in a refugee camp. When entering the exhibition Arian was forced to hand over all his belongings. He learnt this to be a common experience for refugees. Some, he said, are even separated from family members and are forced to hand over their belongings in order to reconnect with their family.

Arian said there wasn’t a dry eye in his tour groups. He was taken on several tours by former refugees or asylum seekers who shared their heart-breaking stories. “Personally I learnt to be open-minded to asylum seekers [and refugees]. You don’t know where they are coming from,” he said. “Often we don’t hear the personal stories of what they’ve gone through.”

Another Salvation Army tour will be held on 11 August. Go to refugeeweekauburn.com.au for further information or email multiculturalministries@aue.salvationarmy.org to get involved with other Inclusive Australia initiatives.