Majors Philip and Deslea Maxwell will take up their new appointments in the United States on 1 November.

Majors Philip and Deslea Maxwell, officers of the Australia Eastern Territory for more than 30 years, have been appointed as the Divisional Leaders for the Kansas and Western Missouri Division, USA Central Territory, effective 1 November 2016. Major Phil will serve as the Divisional Commander, and Major Deslea as Divisional Director of Women’s Ministries.

This is the third consecutive international appointment for the Maxwells, who have been serving outside Australia for almost seven years. Their first international appointment was to Papua New Guinea for four years – Major Phil as Territorial Secretary for Business Administration, and Major Deslea as Director of Schools and, after one year, as Literary Secretary as well.
For the past two and a half years, the Maxwells have been appointed to International Headquarters (IHQ) in London. Major Deslea has served as editor of the Women's Ministries leadership magazine, Revive, and editor of The Salvation Army Year Book. Major Phil has carried the appointment of International Auditor.

In their new roles, the Maxwells will be working with the divisional team to support the corps and centre officers throughout the division. “I will have the privilege of working alongside the women within the division,” said Major Deslea. “I believe women are people of influence, not only within the home but also within the wider community as they speak into community life and the workplace. I am looking forward to coming alongside them to encourage, support, challenge and help equip them for this ministry.” 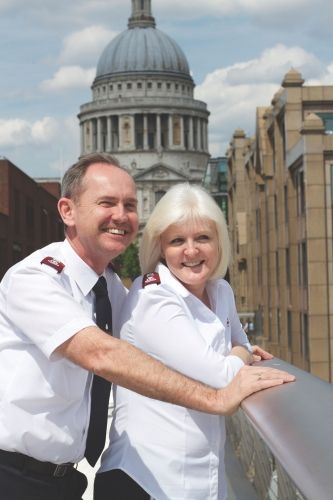 For Major Phil, the role of a divisional commander in the USA, although similar to Australia, is in some ways quite different. “The role of communicating the vision of the Army, supporting and enabling officers and staff in their respective ministries and providing spiritual input and challenge to the broader Salvation Army community is essentially the same,” he explained. “The differences that I am becoming conscious of include the scope of work that is covered by divisional headquarters, its level of authority and the more defined responsibility for governance.”

Being with people is something in her new role that Major Deslea is looking forward to. “I love people!” she said. “I love coming alongside them, hearing their story, journeying through life with them and giving support where I can. I am passionate about encouraging and empowering women to walk in courage and confidence as they grasp their true identity as a child of God and a co-heir with Christ. In my new role, if I can help play a part in that, I will be pleased. And I am also looking forward to helping stimulate the development of women officers' leadership potential.”

Major Phil shares this passion for people. “We also share a passion for mission,” he said. “To work under God's direction in 'unpacking' the potential that God seeds in all his people is my greatest desire. When we unlock that potential we are best positioned to see what God, through his Holy Spirit, is able to accomplish.”

The Maxwells are both extremely thankful for their family and God’s goodness in their lives. “Our children understand our calling to international service and support us greatly (mind you it does give them some great holiday destinations!), they said. “We are conscious though, that unlike other grandparents, our grandchildren can't come for sleepovers, the kids just can't 'pop in' for a meal and we can't be there for grandparents day at childcare, baby sit, or be there when our kids journey through difficult times. But as we have said on many occasions, ‘The Lord is a far better parent that we could ever be' and as our children have had to rely on him, they have grown in their faith and know their heavenly Father's strong arms will always envelop them no matter what they encounter. However, we are grateful for Skype and FaceTime and when we do see the little ones – after only a few minutes – it’s as if we have never been apart.

“As we prepare to make the move 'across the pond' we would be grateful for your prayers, asking that the Lord might continue to provide us with good health, and that his vision for the Kansas and Western Missouri Division will be revealed to us as we work alongside the officers and staff in that part of his vineyard.”