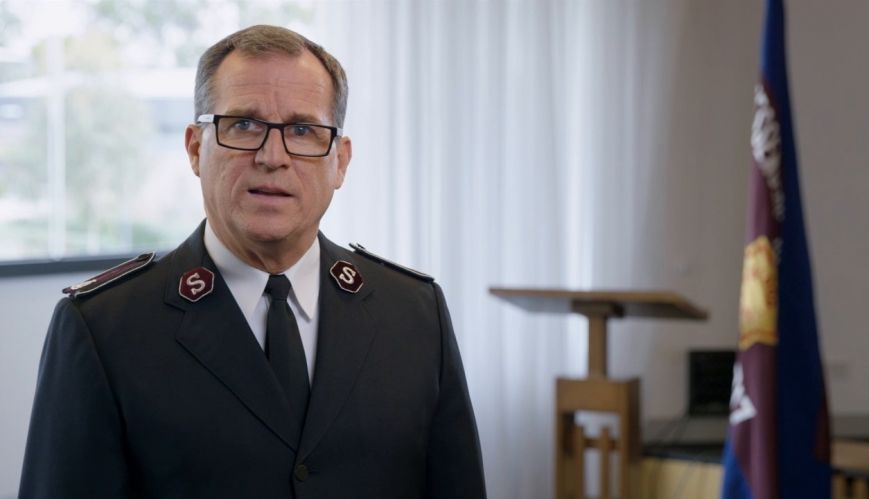 Commissioner Floyd Tidd has announced details of how an Australia Territory will operate.

In March last year, the world leader of The Salvation Army, General André Cox, announced that the Army’s two territories in Australia (Australia Eastern and Australia Southern) would amalgamate to create one national territory. The project would be referred to as Australia One.

The objective of this amalgamation is to provide a structure for The Salvation Army to best deliver its spiritual and social mission to all Australians. The expectation is that this will produce significant and lasting benefits, including:

1. A clear and consistent mission strategy and mission culture across the whole of Australia, ensuring that all our efforts and resources are being used for greatest effect.

2. A unified national strategy for solving the spiritual and social issues that affect vulnerable Australians.

3. Improving our capacity for innovation and strategic thinking by building on the best of each territory.

4. The ability to speak and act with a single voice for greater impact on matters of national interest, including social justice, care for the vulnerable, and other matters of spiritual and community significance.

5. The ability to build stronger national partnerships with:

• Other denominations and Christian organisations

• Other agencies and community organisations

Since the General’s announcement, significant work has been done to support an aligned vision and united voice for The Salvation Army in Australia. This has led to the creation of a structural foundation for a new Australia Territory, which has been unveiled by the National Commander, Commissioner Floyd Tidd.

Crucial to this foundation is the development of a new vision for The Salvation Army in Australia – a vision built on the back of broad and deep engagement. It states: Wherever there is hardship or injustice, Salvos will live, love and fight alongside others to transform Australia one life at a time with the love of Jesus. Speaking to this vision for the Army has been the creation of  “12 Essentials” that define a vision of the Army (included below). 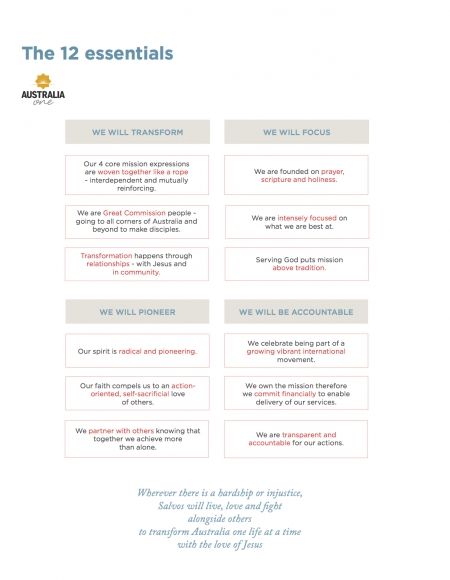 Commissioner Tidd announced the structural foundation at a national leaders’ day in Melbourne on 19 April, and in a video presentation to the Army, in general, on 1 May. It had been approved in London last month by The Salvation Army International Management Council, which included the General, Commissioner Silvia Cox, Chief of the Staff Commissioner Brian Peddle and Commissioner Rosalie Peddle.

“These foundation blocks approved by our international leadership will be built upon in the coming months of transition and change,” said Commissioner Tidd. “I am confident that the National Vision Statement can be realised through the continued dedicated service of Salvos in communities across Australia, supported by an appropriate national administrative structure. The days ahead will be filled with challenges and opportunities as together we work to position The Salvation Army for 21st century Australia.

“I am grateful to so many who have selflessly contributed to the development of these key components in the development of Australia One. I have been impressed by the engagement of officers, employees, soldiers and volunteers who have contributed to the process leading to these foundational steps for Australia One irrespective of personal implication, considering first the mission.”

The Australia One project has required a decision to be taken on the location of a Territorial Headquarters. Commissioner Tidd has announced that the new united Australia Territory will have its headquarters in Melbourne. In a significant shift, though, under the new model leadership and support roles will be dispersed across the country.

As part of an expansion of national leadership, divisional leaders will be added to a Senior Leadership Team. The Senior Leadership Team will be headed by the Chief Secretary and include – as well as divisional leaders – cabinet secretaries and some new positions. New positions include Secretary for Spiritual Life, Advocate for Women’s Equity, and Director for Mission Enterprises, a role that may not necessarily be filled by an officer.

The Senior Leadership Team will be responsible for managing implementation and delivery of strategy approved by a governing board. The Territorial Commander will chair the governing board, while a Territorial Management Council will be chaired by the Chief Secretary. This will allow the Territorial Commander to remain focused on the spiritual life and strategic mission direction of the territory, and increase their availability to act in a pastoral role to the general Salvation Army membership.

The creation of a new national territory also provides The Salvation Army in Australia with an opportunity to be an early adoptee of the international move towards a new way of governing the Army, as outlined by the General as part of the Accountability Movement.  A new governance model for The Salvation Army Australia Territory will mean:

# A board chaired by the Territorial Commander. The board will be the single governing authority, responsible for strategy and governance. It will include officer leadership and five non-officers, with at least two being active Salvationists. All other members must have a strong Christian faith. Membership will be based on minimum one-third female and minimum one-third male. Appointments to the board, which will be made by the General, will also be conscious of “broader diversity considerations”.

# A cabinet chaired by the Territorial Commander. The cabinet will oversee and recommend actions to ensure The Salvation Army as a whole is developing as a spiritual movement and acting in accordance with its mandate. It will consist of senior officer leadership.

# Board committees with duties delegated by the board. The committees can make decisions and advise the board on matters that do not require full board involvement.

# Territorial Management Council. The Chief Secretary will chair a management council with responsibility for the operational elements including business transactions beyond the delegated authorities to divisions and front line.

# An advisory council of community and business leaders. This advisory council replaces the existing Territorial Advisory Boards. This new nationally focused council will provide advice to the Territorial Commander, but would not have the power to vote on corporate matters or have a legal fiduciary responsibility.

In a significant philosophical shift, the recommended operational model for an Australia Territory includes a deliberate long-term intent to more closely align the work of corps and the Army’s social work. This intent extends to making sure that the resources needed to facilitate the strengthening of this relationship are made available. The operating model has been reviewed to ensure that the Army can balance its objectives of innovation, better stewardship, stronger partnerships, and greater impact.

Commissioner Tidd said the decision on where to locate Territorial Headquarters was “probably one of the most gruelling and difficult tasks undertaken by the Australia One Steering Committee”. He said that after months of investigation, 10 officers equally representing the Australia Southern and Eastern Territories and four independent people – two from Melbourne and two from Sydney – met for two nights and one day. The independent representatives did not take part in the vote on the location of a new Territorial Headquarters.

“At the end of discussion on each of 10 criteria (on which a decision was based), time was given for silent reflection before scoring was made by each individual,” Commissioner Tidd said. “A time of pensive, thoughtful, prayerful consideration was also given before we came back into the room for a final vote.

“But we left the room that night with a consensus. This is a process in which we sought God throughout. We asked that he would use the process; that he would speak to us and that it would be his outcome.”

A Gender Equity Plan is being devised to “address the systematic inequality faced by women officers”.

A paper provided to national leaders recommending the plan, quoted General Cox, when launching the project to create one Australia Territory, as saying: “I believe Australia One is a unique and once-in-a-lifetime opportunity. Don’t miss it. I want to encourage all officers and employees to embrace the new opportunities that will come as a result of this bold and sweeping change.”

The paper said its recommended plan sought to implement the Army’s biblical teaching about women’s leadership. Further, the paper said its plan would ensure that the new Australia Territory structures, valued the unique gifts of each individual.

As a result, an Advocate for Women’s Equity will be appointed, supported by a Women’s Equity Committee. The committee will have equal representation of women and men. It will have internal and external members. Its role will be to develop and implement strategies to achieve the goals of gender equity for women.

For more information go to australiaone.info/update and to watch a video of Commissioner Tidd announcing the new arrangements go to others.org.au/video/videos

Currently, the transition to one territory is for national leadership to assume direct oversight of the existing Southern and Eastern territories mid-year 2017, then leadership of one entity effective 1 July 2018, in preparation for the official start of the Australia Territory on 1 January 2019.