“I felt like a prisoner, I couldn’t talk to my family back home. I was physically assaulted by my employer, I was hit with a broomstick, had car keys thrown in my face and was verbally abused for talking to my husband in Tonga. My arms were badly bruised. I was off work for two days but wasn’t allowed to go to the doctor. I was threatened with a gun that if I talked to anyone about this incident then I’ll never come back to Australia. I had my mobile phone, bank card and passport taken away from me for three months then I was sent home early to Tonga.” – Pakileata Akauola, from Tonga

“One day I wasn’t selected to pick fruit so I had to stay behind at the house. The employer showed up and said he is going to give me a hiding. He said lie down on the ground. I refused, he beat me on my back, shoulders and head with a shovel. My jaw was broken, I wasn’t allowed to go to hospital and didn’t work for two weeks. I went to a medical clinic and paid my own expenses. All I had to eat was water and crackers soaked in milk. The contractor told me later he should have killed me instead.” – Nehumi Feo Kolesi, from Tonga

These are just two of the personal testimonies from Pacific Island Nation workers who were injured or assaulted while picking fruit and vegetables in the Australian horticulture sector approximately two years ago – and the labour hire contractors who employed these two workers are still operating today in Queensland, NSW and Victoria.

For the past year, Alison Rahill, National Network Coordinator for The Salvation Army Freedom Partnership to End Modern Slavery, has been meeting with Pacific Islander communities in the “food bowl” districts of regional Australia as part of the Freedom Links workshop and training program , that empowers people to identify and respond to human trafficking, extreme exploitation and forced labour in their community.

Alison has also been actively linking migrant communities with Salvation Army corps and services in places including Griffith, Mildura and Bundaberg. 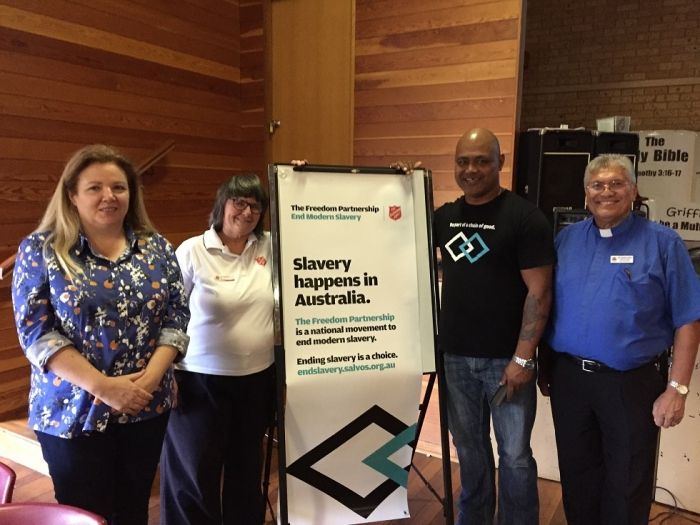 “Local Pacific Islander church congregations have shared their experience of supporting their countrymen and women who are here as seasonal workers to pick fruit and vegetables,” Alison explains.

“Many of these stories have indicators of criminal exploitation and slavery-like work practices such as withholding of wages, untreated workplace injuries, threats and assault.

“It is significant that these workers have now come forward to share their painful stories in the public domain so that this type of abuse can finally come out of the shadows.”

Members of The Salvation Army’s Freedom Partnership and Multicultural Ministries last month supported a Service of Lament in Strathfield, Sydney, in memory of Pacific Island workers who have died while working on Australian farms as part of the Federal Government’s Seasonal Worker Program.

The Service of Lament also focused on broader attempts to combat modern slavery in Australia and internationally.

Survivor advocate Moe Turaga, who is now employed as a personal-plan facilitator and lifestyle worker at SAILSS in Bundaberg, spoke at the service.

“We believe the Australian Government should be leading the way on ending slavery in the Commonwealth and in our Pacific region,” he said.

After a united coalition and advocacy by church and business leaders, the Australian Government has said it will introduce a Modern Slavery Act to Parliament this year.

“I wasn’t aware that such exploitation was happening on my doorstep, until Alison brought it to my attention,” said Major Lyn Cathcart, Griffith Corps Officer. “Once aware, I became more attuned to the issue, saw evidence in people coming in for assistance and was able to ask appropriate questions. At the moment we are not set up to take in exploited workers, but we can offer support and immediate assistance. There is also assistance through Salvos Legal. This issue is a long-term one, and we are planning to do more into the future.”

Major Cathcart joined Alison recently for a meeting at a Fijian service at Griffith’s Uniting Church where people had been encouraged to come forward and talk about exploitation – and what they could do about it.

“So many people came forward to talk about their experience,” said Major Cathcart. “People of all ages didn’t know who they could talk to or where to get help.”

After training through Freedom Links, Major Cathcart and her team have been able to assist some exploited workers and families get legal advice, emergency food and clothing supplies, medical care, and temporary accommodation. Pictured above, Freedom Partnership members meet and greet multi-cultural association members. “We are always here as well, to listen to their stories so they know they are heard,” said Major Cathcart. “We are available. “We are also supporting others who are doing their part, such as the local Soroptimists, who have taken on an active role to engage with marginalised migrant workers.

“Our plan is to open up a room in the corps where agencies, perhaps such as Salvos Legal, can come and give advice to exploited workers; where people can talk about what’s happening to them and get the help they need; and where they can share and have a meal together. It’s around education – learning to ask the right questions; and genuinely caring.

“My ministry is to go to the last and the least and I am very passionate about what is happening here. These people, who are just wanting to do better for themselves and their families, are victims of circumstances outside themselves. They are being exploited in our country and desperately need help.”

The city of Griffith in the north-west of the Riverina region of NSW, has the largest population of people born outside Australia, west of the Great Dividing Range.