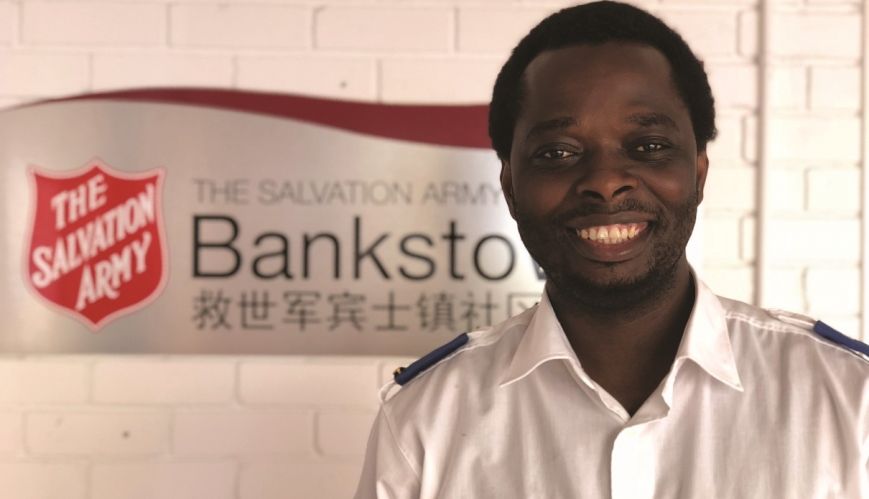 Samuel Smart believes The Salvation Army is where God wants him to be.

Samuel Smart celebrates 10 years as a Salvo this year after he and his family started attending Bankstown Corps in Sydney’s south-west when they arrived in Australia from West Africa. Here he shares his story with Others Online.

I started coming to this church [Bankstown Salvation Army] in October 2008, so this year will be 10 years. I came here together with my family, my mum and sister.

I came from Sierra Leone, which is in west Africa. When the war broke out in Sierra Leone we had no option but to run to the neighbouring country. My dad passed away in the war. We were living in a camp in Guinea for five years before we were granted asylum to come to Australia.

When I walked through the door [of Bankstown Salvation Army] that day, I think it was on a Friday, my sister and I and my mum were welcomed by the pastor and we felt at home. People that we didn’t know just opened up their hearts to us, trying to help us. They gave us all the necessary advice that we initially needed.

We told them [Salvation Army officers] that we have a place [to live] but we have nothing in the place; everything is empty. At that time they had the store in the centre of Bankstown, the Salvos Store, and we went there with the pastor and accessed what we needed. We said we need furniture and bedding, and some items that we need to start life. Everything was provided. They had a truck and put all the furniture in there and in the evening they came with all the items that we needed.

In 2010, I met someone who wasn’t a Christian. She was from my country but she grew up here and she went to school here. She was a Muslim and I told her, “If you don’t have any problem with my religion we can still be together because this country that we are living in is a multicultural country, so if you see someone that you love, no matter what, you can still make a family.” And she was quite happy. I said, “I’m not going to force you to join my religion, I’m not going to force you to become a Christian, but I believe, and I’ll pray about it, and God will convince you”.

I believe you should not force anybody to make a decision about religion; it needs to come from their heart. So, I prayed about it and she started coming to church. Initially she came one Sunday and after another she came again and she liked it, she liked the way we worshipped and the way we shared love in the church. So she told her family that she’s going to become a Christian and they didn’t oppose it.

After one year of marriage we had our first child. Her name is Rachel and she was dedicated here in this church, and then after two years we had another baby. Her name is Brigitte.