The Salvation Army’s Still Others ‘Gathering as one Army’ saw thousands of Salvos from across Australia meeting in Melbourne over five days, with hundreds more watching the main meetings online.

“Five days at Still Others with several thousand of my closest friends,” was how Chris Brindley from Brisbane City Temple described it, with National Gender Equity Advocate, Colonel Julie Campbell, agreeing, saying it was just like a big family reunion.

The official recognition and commencement of the new Australia Territory on Friday night was a highlight for many. “I loved seeing the generations involved together –embracing the new Australia One vision,” said Maree Southall, Children’s Ministry Coordinator at The Salvation Army’s Gold Coast Temple. “I wanted to be part of this landmark event of The Salvation Army and I’m excited to watch what unfolds in the future.”

Inner-West Sydney soldier Rhondda Kingston agreed. “My favourite time was when many, many people from all over Australia joined together in commitment and prayer around the map of Australia, showing their acceptance and prayer for the new thing that God is doing in The Salvation Army in Australia.”

For retired Salvation Army officer, Joy Goodacre, a highlight was hearing from General Brian Peddle. “I enjoyed the retired officer luncheon and meeting with the General, and the coffee and chat with the General was very good; he’s a very personable man and has a lot of deep things to say.”

The openness of the world leaders to mingle and chat with Salvos at Still Others, and during their earlier visits to Sydney and Brisbane, came as a pleasant surprise to most.

“I absolutely loved hearing General Brian Peddle and Commissioner Rosalie Peddle both speak,” said Denise Merton, soldier at Sydney Congress Hall, who attended the NSW/ACT Divisional Rally on the Saturday before Still Others. “They [General Brian and Commissioner Rosalie Peddle] were very friendly and went around talking to everyone. I even shook hands with the General, at the door. I would have liked a ‘selfie’, but I was too shy to ask him.”

Others weren’t so shy, and Salvo Facebook feeds clogged with pictures of Australian Salvationists and officers, beaming beside their world leaders. 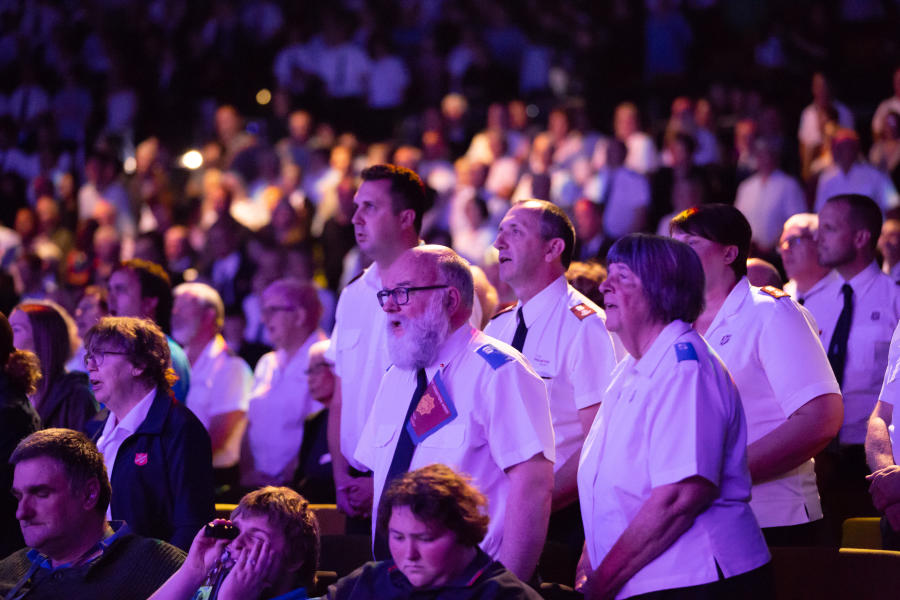 The Youth Block Party on the Saturday night was the highlight for many young Salvos. “Major Rava was preaching up a storm,”said Jacob Browning from Menai Corps in Sydney.

“You could really see the Holy Spirit working through her and it was just amazing in the response time, seeing all of these youth leaders from all over Australia praying for the youth and each other. It was so encouraging to meet youth leaders from other states, knowing that we will be working together from now on.”

At the same time as the Youth Block Party, hundreds of Salvos and their families enjoyed Our Christmas Gift concert, featuring Silvie Paladino, James Morrison, Alana Conway and Isaiah, among other artists. “The song More than Wonderful, sung by Silvie Paladino and Isaiah, to me was an affirmation of the lordship and kingship of the baby Jesus whom we celebrate at Christmas. Silvie and Isaiah showed their love of our Saviour as they sang with authority and commitment,”said Rhondda Kingston from Sydney’s Inner-West Salvos.

The time between sessions was almost as powerful as the sessions themselves at Still Others, with connections being made between Salvationists from the territories formerly known as Australia Eastern and Australia Southern.

“I met Commissioners Jennifer and Peter Walker, leaders of the Indonesia Territory, by chance sharing a table in a busy food court,”said Maree Southall. “They shared of their ministry and the work they are doing in Indonesia. It’s always interesting to hear about the work Australian officers are doing overseas.”

One corps officer from NSW introduced herself to her counterpart from a corps in Tasmania. A connection was instantly made when the officer from Tasmania revealed that she had been praying for a member of the NSW corps, since she saw a prayer request on Facebook earlier this year. This launched a long discussion, where they were able to share stories of miracles and hardships.

For newly enrolled soldier of Kalgoorlie Corps in Western Australia, Cameron Mallory, the experience of being part of Still Others was eye-opening. “I felt honoured to be a part of it. The best part would have to be the workshops and exhibitions; some of these blew my mind. [I thought I was] aware of a lot of what the Salvos do, well it turns out I knew very little and my mind was blown. It makes me even more proud to be called a Salvo!

“Walking through the airport still in uniform on the way home was an experience in itself. So many people either saying ‘hello’, smiling or giving me a high-five. It was instant friendship with anyone I conversed with.”