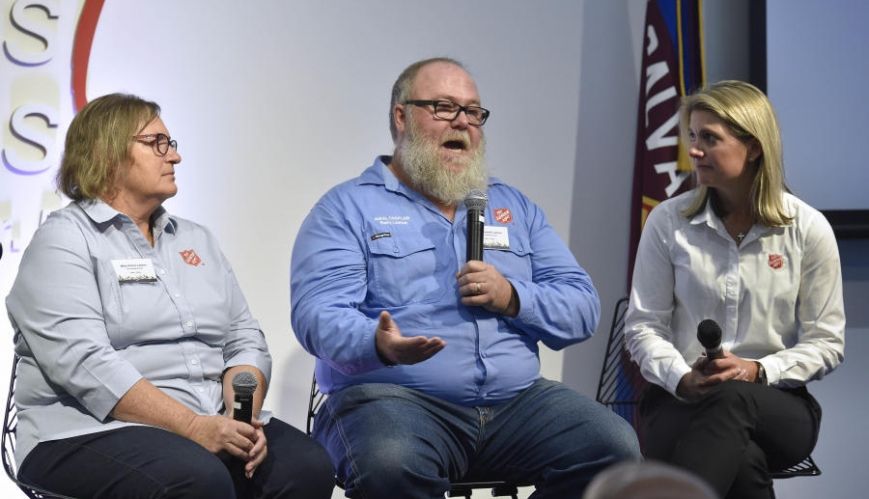 Salvation Army Rural Chaplains, Majors Rusty and Di Lawson spoke at the 2018 Christmas Thank-You luncheon at Redfern, Sydney, about the struggles of farmers in the current drought.

The drought is far from over. If the heavens opened across all of Australia tomorrow and the rain fell in bucketfuls, filled all our dams, cleansed the rivers and replenished this thirsty, parched earth, the drought would not be over. It doesn’t rain grass. It doesn’t rain crops. It definitely doesn’t rain money. So, we’re looking at three, maybe five years before our farmers recover.

Because it will rain one day. The drought will break and we will be there, supporting them, like we have been for over a century.

Since 1 July across NSW and Queensland, The Salvation Army has distributed $3.3 million to 1650 farming families. That’s mainly been through direct deposits into bank accounts, but other times it’s been a gift card that can be spent locally, which is so important to keep rural towns going. Bringing in goods-in-kind from outside doesn’t really work because local economies must be supported, so that at the end of the drought the shops will still be open. We have also assisted in paying bills.

But it’s not only about providing the financial assistance. Yes, that’s important, but it’s about connectivity. It’s about meeting people where they’re at. It’s about pulling up in the driveway, getting out of the vehicle and saying, “G’day mate, how are you going?” You shake the farmer’s hand and make physical contact.

A lot of these people are isolated. They live on properties that are sometimes far from town. When my wife Di and I were based at Broken Hill we took nearly a day to get to one property near the settlement of Milparinka – it was 300km drive to the town, then a 30km drive to the farmers’ gate and then another 70km drive to their actual house! When you get out of the vehicle at these places and hug someone, you might be the first visitor they’ve had physical contact with in, say, three weeks. So that connectivity, that human contact, is very, very important.

We sit around the table, we share a cup of tea, we have a yarn. I’m a bit of a practical kind of guy, very hands on. I’ll go out and work with the farmer, I’ll pull wire through a fence, I’ll shovel grain, I’ll tote hay bales, I’ll work stock through a yard, whatever is needed at the time. Farmers talk at a much deeper level while they work, and it’s then that we find out the true story, the true extent of what’s going on for them. The couple, when they’re together, they provide a united, strong front. But, really, they’re both struggling with their own issues and there can be a lot of them on a farm.

Some don’t really have the money to have a proper Christmas meal. We’ve been able to provide some Christmas cheer in the form of gift cards, but for most of them Christmas Day will be another day of toil. Another day where they do the endless task of feeding stock – all because there is no grass in the paddocks.

A lot of the paddocks are just dustbowls. And this is the food basket of Australia! So, this drought not only affects our farming families, but it affects each and every one of us in the long term.