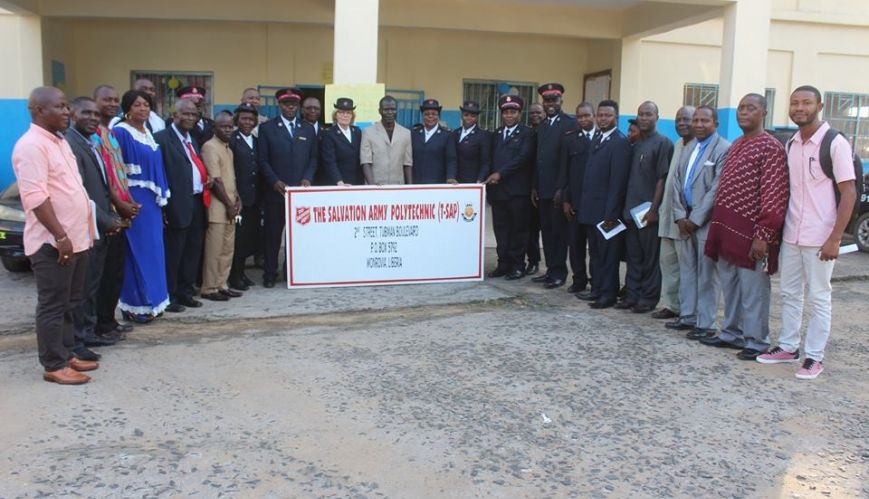 The Salvation Army in Liberia opened a much-needed polytechnic in a nation where education is a major need and has the capacity to transform lives and communities.

The Salvation Army in Liberia has broadened its education capacity with the opening of a polytechnic, which will award degrees and other tertiary qualifications.

Education is a major need in West Africa nation, which is rebuilding after years of civil unrest and still recovering from the 2014-15 outbreak of Ebola.

National government statistics estimate that just 47 per cent of the country’s 4.8 million population are literate, with most of Liberia’s children and young people living in communities with little or no opportunity for formal education. It is in this context, and with a 25-year heritage of providing primary and secondary education in the country, that The Salvation Army has opened its first polytechnic in the nation’s capital, Monrovia.

The building – opposite Monrovia City Hall and adjacent to the United Nations complex in the city – was constructed with financial support from The Salvation Army Norway, Iceland and the Færoes Territory between 2004 and 2008. However, it was not until 2017 that the country’s Commission on Higher Education accredited the institution, bestowing the right to run tertiary education programs and offer associate degrees in various disciplines.

The official opening ceremony of the polytechnic, marking the culmination of the transition process, was held in the presence of Lieut-Colonels Samuel and Mary Mkami, who oversee Salvation Army work across Liberia and Sierra Leone.

Invited guests included government officials and representatives from partners and other missions across Liberia. Commissioner Birgitte Brekke-Clifton, International Secretary for Program Resources, travelled from International Headquarters in London to lead the dedication event.

“I feel humbled to be the one to officially launch this polytechnic to the service of God for the benefit of humanity in this nation and the world,” the commissioner told attendees.

“It is my anticipation that this new polytechnic will be a place of inspiration and hope for the future of the young people of Liberia.”

The commissioner reminded students that their intellect is a “gift from God”, before sharing a prayer of dedication.

Three hundred students are already enrolled, studying for diplomas and associate degrees in a range of disciplines from building construction and electrical engineering to auto mechanics, electronics and computer science. Other courses include teacher training, marketing, procurement and contract management as well as theology, nursing and human resources management.

A host of qualified and experienced faculty members have been appointed, including the Vice President for Academic Affairs, Dr Pah K. Suku – an experienced educator in both the American and Liberian education systems.

In a speech, the polytechnic’s president, Dr Emmanuel K. Urey, reflected on his first four months, which included the renovation of the college’s main building and the recruitment of the first intake of tertiary-level students.

Outlining his vision, he predicted that the “future of the school will be bright” as he spoke about the prospects of venturing into additional subject areas such as agriculture and renewable energy technology. He called on national and international partners to support the polytechnic.

Making remarks at the launch event on behalf of the President of Liberia, George Weah, the Reverend Emmanuel Nimely, National Religious Advisor, thanked The Salvation Army for its contribution to the Liberian education system and praised the organisation for its newest undertaking.

He told attendees that President Weah was pleased with both the spiritual and social support of the mission and pledged his government’s continuous partnership with The Salvation Army in Liberia.

The Salvation Army in Liberia continues to operate 12 primary and secondary schools and a vocational institution covering six of Liberia’s 15 political subdivisions, with a strategic vision of reaching all of the country.