2019 Goulburn Woman of the Year, Sarah Baines (left) attended the 2019 NSW Women of the Year awards with her local member, Pru Goward (right).

The Salvation Army Moneycare Financial Counsellor, Sarah Baines, has been named the NSW Government’s Goulburn Woman of the Year.

The announcement was made in the week of International Women’s Day in a surprise meeting at the office of the State Member for Goulburn, Pru Goward, who later posted on Facebook: “Sarah’s work as a financial with The Salvation Army Goulburn to vulnerable people in our community is legendary and powerful.”

Sarah has been a Salvation Army Moneycare Financial Counsellor for the past eight years, providing free financial and support for individuals, couples families. She is passionate about advocating for people within the financial system who are burdened by debt and unable to navigate a way through their situation.

During that time, she has assisted hundreds of people, helping to negotiate settlements with banks, creditors, and lift the heavy burden of debt from families and individuals. The result has been described by her participants as 'miraculous', with people experiencing better mental health outcomes, less family stress and a more hopeful outlook on life.

Sarah said she was thrilled to be with the award: “I was so shocked! 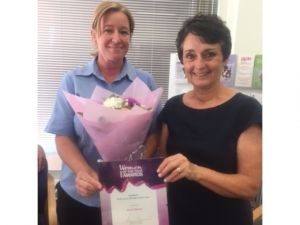 Sarah Baines with with her local member, Pru Goward (right)

“There are so many good women out there doing so many good things … so to be named Woman of the Year for this whole region means a lot.”

She said her role with Moneycare is more than a job, it is a passion, and it’s her way of living out The Salvation Army’s vision statement to live, love and fight alongside others to transform Australia one life at a time. “I give [community members who come to see me] a lift,” she said. “When they have no fight left, I give them hope and I’ll fight for them and alongside them to navigate a way through their financial hardship.”

Sarah attended the 2019 NSW Women of the Year award ceremony in Sydney on 7 March. 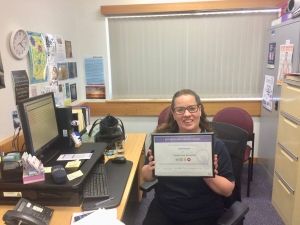 Earlier this year, another Salvation Army financial support worker was , this time for her service to the No Interest Loan Scheme (NILS). The Salvation Army’s Leigh-Anne Simpson (pictured right), from Tasmania’s Doorways office in New Norfolk, was awarded a distinguished service award for her administration of the NILS scheme in her area.

“Congratulations Leigh-Anne, and thank you for the way that you live, love and fight for the people of the Derwent Valley,” The Salvation Army Tasmania Public Relations Secretary, Major Brad Watson, posted on the Tasmania Salvation Army Facebook page.