There are a growing number of people dropping into Brisbane City Temple (BCT) each week for a free community lunch, caring company and additional support.

After a short hiatus, the program restarted in September last year with an average of 34 people attending each week; eight months later and the average is almost double that. 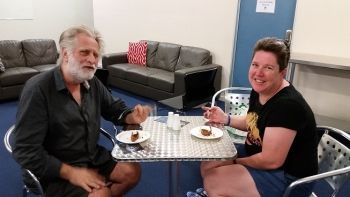 Guests enjoy dessert as part of the community lunch.

“We’re not sure if the momentum is just building as more people find out about it, or there is actually a component of additional need,” said Howard Sanders, who coordinates the program.

Howard, who also serves as chaplain and volunteer coordinator at nearby Pindari Men’s Services, said the lunch is about creating a meal and a space for those who are homeless or disadvantaged but, more than that, it’s about creating a community for everyone to be part of.

“About 45 per cent of our guests, ranging in age from 18 to 92 and from amazingly diverse backgrounds, are either homeless or at risk of being homeless – living in cars and couch surfing,” explained Howard.

“We also have people sleeping rough and from time to time, backpackers.

“Fifty per cent of our guests have stable accommodation – public, private or assisted – in some cases, having a free meal once a week is enough to keep them above the poverty line.

“Others come in for community – for interaction, conversation, to catch up with regulars, and to see friends and staff. 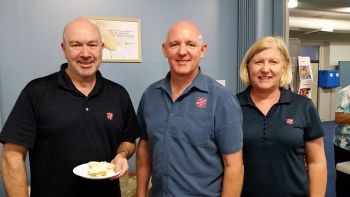 “Ideally, we’d like to have people working in the city to come as well to help create an even greater breadth of community.”

Volunteers assist Howard during the lunch. Majors Sharon and Scott Allen, BCT Corps Officers, play a largely pastoral care role, spending time with as many guests as possible each week.

One volunteer, Penny, comes in on an extended lunch hour from work, and serves at the lunch. Another volunteer from BCT, Desiree, volunteers because she has “a heart for the homeless”.

“We are so grateful for our volunteer team,” said Howard. “Some are part of BCT or God’s Sports Arena and provide consistent links to the church, and some aren’t part of the church at all.”

Volunteer Kristie does the cooking. Last year, she asked at BCT whether students studying for a Certificate 3 in hospitality with the organisation SmartSkill, could volunteer at the lunch as part of their program. 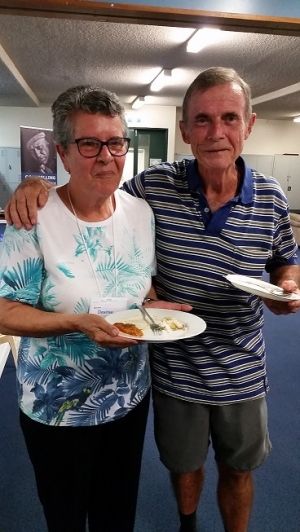 Volunteers play a vital role at the lunch.

The students did come and were so touched by the community and what the lunch was doing for those attending, that, at the end of their studies, they prepared a special meal for the guests complete with table decorations and service.

After agreements with the corps (and divisional and territorial headquarters) were finalised, SmartSkill, under the auspices of career and employment support organisation Busy at Work, began a formal 10-week training course for students this year, using the BCT kitchen.

They provided student volunteers on Wednesdays and brought and cooked all the food for the lunches over those 10 weeks. Full table service was a part of the lunch during the initial seven weeks.

“It touches my heart to see our guests having a hot and nutritious meal served to them, with the touches of home such as cutlery and crockery,” said Howard.

“Busy at Work hopes to receive additional funding in June for another 10-week course this year, and three more throughout 2020.”

Community guests also receive packages they can take home with them, containing mostly food items they can eat over the next few days.

As well as a meal and friendship, guests can also access a library with a variety of books and magazines available, a safe and comfortable space to rest or sleep for a few hours, socks and beanies during the colder months, and free counselling offered by Felipe (Counselling Men Project).

Howard and his team also hope in the near future to have Centrelink representatives offer their services occasionally during the lunch, as well as a basic medical service, hairdresser, podiatrist, musicians, and organisations specialising in drug and alcohol issues who can speak to the guests.