Exploring life and faith over a coffee Exploring life and faith over a coffee

The Marketplace Coffee Club, hosted by Murray Bridge Corps, is a unique example of how chatting over coffee is often a relaxed and inclusive way for people to explore life and faith.

Twice a month on a Sunday morning, Captains Claire and Tim Watson, officers at the regional Murray Bridge Corps, 75km south-east of Adelaide, gather with leaders and members from a variety of denominations and backgrounds, for coffee, faith discussions and friendship. 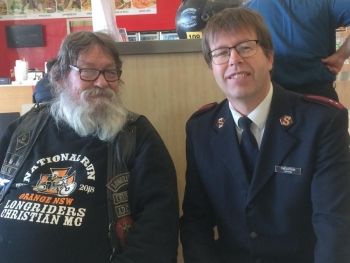 Ian Warburton and Captain Tim Watson at the coffee club.

Three people have accepted Jesus as a direct result of coming to the club with their friends.

“We meet at Murray Bridge Marketplace at 10.30am … and coffee shop Mojo Expresso changed their opening hours to accommodate us as they were interested to see that the club involved the churches working together, and not just one denomination,” Tim said.

“During each club, a different person will share for around 15 minutes on how Jesus has impacted their life, and then we have a chat around the tables.

“Anyone is welcome to join us if they want to. We want to provide an opportunity for people to explore the Christian faith in a familiar place. Coming to a church service is a strange thing for most people; so coming to a shopping centre makes it easy.

“It also gives those who attend our other programs the ‘next step’ opportunity if they want to engage with us at a deeper level.”

The coffee club has been attracting up to 30 people each meeting.

The Sunday meeting at the corps moved from 10am to 9.30am so those attending could also go to the coffee club afterwards, which several do.

“God has wanted us in this shopping centre for a while now,” Claire said. “He prompted me to start a weekly prayer group here three years ago to pray for the city. Six of us meet in the food court on Monday mornings; we’re just ordinary people, wanting to pray for Murray Bridge, and the coffee club is part of what God is doing here.” 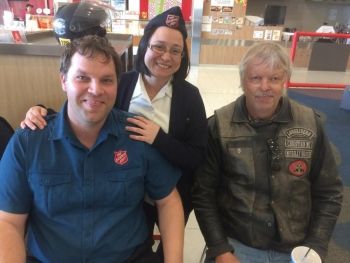 Tim and Myrtle Freund and Duncan Emmins are club regulars.

Janet Emmins, a Salvation Army financial counsellor and a member of the Longriders with her husband, Duncan, were instrumental in establishing the club. Janet follows up new converts with a Christianity Explained course.

Marsha, who has come to the Marketplace Coffee Club, says she comes “because I love the stories and catching up with friends”.

“This has really exceeded our expectations,” Tim said. “We will keep the current format for now, as it’s working!”

The Watsons and their team are also focused on a range of other activities that reach out into the community and build relationships with different groups and individuals.

Cafe Connections, a Work for the Dole program, takes place twice a week, offering a low-cost meal and positive social occasion for more than 100 people across the two lunches.

Mary Harris, an experienced chef and Salvo, leads the dedicated team of volunteers and Work for the Dole participants.

“We engage with the customers, are developing some good relationships and invite them to the Coffee Club as well,” said Claire. “We are building connections with children in the community through using the cafe facilities for The Salvation Army Kids in the Kitchen program. In the near future, we will be creating a kid-friendly play space for pre-schoolers in the cafe.” 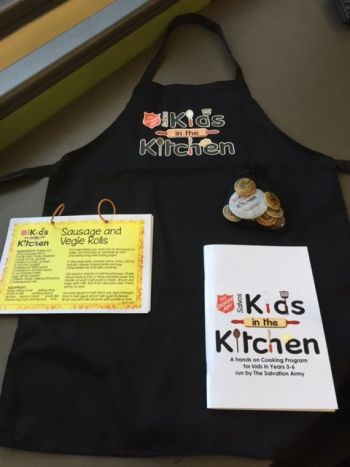 The Kids in the Kitchen program is helping to build community connections.

On Thursday evenings the corps runs a soup kitchen to help those doing it tough, including those experiencing homelessness.

Once a month, after the soup kitchen, the Murray Bridge Rotary Club has begun running free community meals with around 50 people attending. Again, the focus is on those struggling in the local area and offering a nutritious meal, a safe place and a caring community.

Claire often spends time in the corps’ community support services, chatting with clients who want to talk and inviting them to corps activities. “Some of these people really want to talk, and several have come to the coffee club,” she said.

Tim also leads a weekly men’s group that, after a meal together, share about the issues and problems they are facing. The group includes men from the corps, as well as other denominations.

Prison ministry is another area of outreach for the corps, with Tim recently joining Kairos Prison Ministry as one of the interdenominational team.

“We have many dedicated volunteers who enable us to engage with the community in so many different ways,” said Claire.

“Murray Bridge is ranked in the top 10 per cent of the most disadvantaged communities in Australia, so The Salvation Army is working hard to reach out to people and join other groups meeting the diverse range of needs as well.”

Area Officer Major Dean Clarke says that Claire and Tim are corps officers for their community.

“Tim and Claire are not ‘superhero officers’,” he said. “I don't think anyone is. But they faithfully serve Jesus through loving and caring for their community. As a result, they are seeing Murray Bridge transform, one life at a time.”