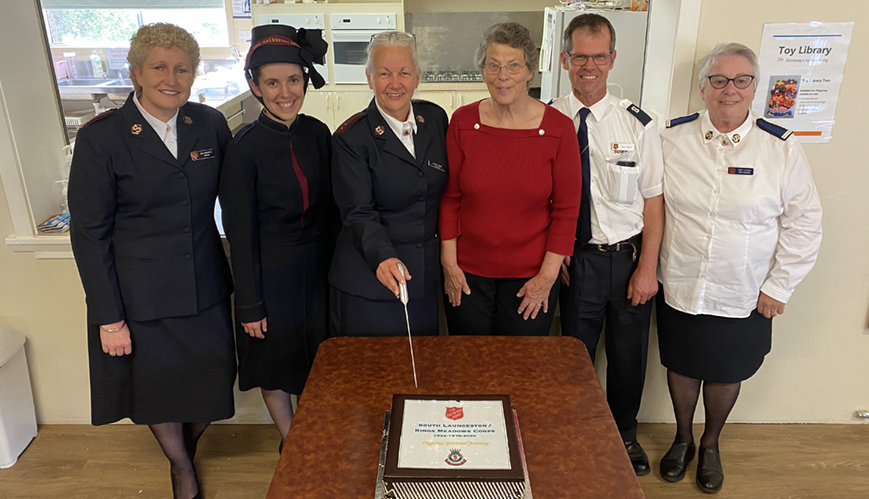 The Kings Meadows Corps, formerly South Launceston Corps, has celebrated 98 years of ministry as it closed the doors of its building for the last time. In a celebration ceremony entitled ‘Ongoing Spiritual Journey’, Divisional Commander Captain Kim Haworth acknowledged the incredible ministry of the corps over such a long time. She then cast a vision of the way forward for a strengthened Salvation Army across the greater Launceston area as resources are consolidated and new initiatives undertaken.

Soldiers, friends and former members of the corps gathered to mark the occasion, sadly with a limited capacity due to continuing COVID-19 restrictions. The event was live-streamed with viewers tuning in across Australia. A worship time was followed by a final meal together on the corps site.

It is recorded that in 1922, Brigadier Ransom Garbutt, the divisional commander of Tasmania at the time, saw a vacant block of land in Galvin Street, South Launceston, and declared it would “be the place for a hall”. His word quickly became action, not only with a physical building but a corps that has served the south of Launceston ever since.

This ministry was evidenced to the congregation during the ceremony through drama, video and the testimonies from Majors Stephen and Linda Miller, officers who entered training from the corps. The continued witness of the corps, despite dwindling numbers, was demonstrated as the last two junior soldiers received awards from Corps Officer Captain Jacky Laing during the closing ceremony.

Kim encouraged the gathered congregation to “honour the memories of the many ‘giants of the faith’ who have served the mission of God faithfully from the South Launceston/Kings Meadows Corps” and to “look with great expectation to the ‘new things’ the Lord is inviting us into as we seek to step out obediently into unchartered territory across the Division.”

Major Brad Watson is the Public Relations Secretary for Tasmania.