Two clients at The Salvation Army Doorways Hub in Katherine keen to take advantage of the new Saturday breakfast, which is an extension of the ministry’s meals services.

More than 100 people experiencing homelessness or social isolation in the Northern Territory town of Katherine have been going hungry each weekend as there have been no community services open to meet their needs.

The Salvation Army is seeking to change that, with an extension of its meal services.

The Doorways Hub, attached to Katherine Corps, 320km south-east of Darwin, had been serving breakfast and lunch to up to 70 people during the week, but the service was closed on weekends.

Based on the number of clients served during the week, hub coordinator Eli Sherman said he estimated that more than 100 people would be going without a meal between lunchtime Friday and breakfast on Monday.

Eli said after some discussion in February, the hub introduced a once-a-month Saturday breakfast program to see if it would be successful and to ascertain the need in the community. “We sat down as a group and thought that we’d try it, just to see what kind of response we got,” he said.

Eli said 50 people turned up for the first breakfast, a sausage sizzle, and then a similar number turned up again on the following two Saturdays expecting breakfast. 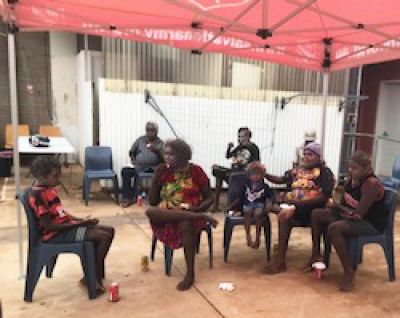 Some of the people keen on the Saturday breakfast menu served by The Salvation Army in Katherine.

Seeing the need for a weekly program, Eli said a roster involving full-time staff and volunteers had been drawn up to run the breakfasts every Saturday, “for the moment”. He said a gold-coin donation, “or any kind of donation”, was encouraged.

Breakfasts of tea and toast are served daily during the week, followed by a lunch.

People attending the breakfasts are also able to use the Doorways Hub facilities including showers, toilets and laundry, as well as relax in the common areas where there are televisions.

Eli said that before the outbreak of COVID-19 last year, the hub was providing breakfast and lunch for between 40 and 60 clients. During the pandemic restrictions, those numbers dropped by about 40 per cent.

Since social distancing and other regulations have eased in the Northern Territory, numbers have spiked – at between 70 and 100 each day. “So, it’s a very, very, very busy place,” Eli said.

He said the increase in numbers could be COVID-related in that some people were not able to ‘return to country’ because of border closures between Western Australia and the Northern Territory and other movement restrictions and also word of mouth.

“Having a service like ours is fantastic,” Eli said.