A couple of grateful backpackers at the Gatton caravan park after having stocked up on supplies provided as part of The Salvation Army’s Lockyer Valley corps’ local mission delivery.

The Lockyer Valley, on the vegetable farming belt in south-east Queensland, is home to thousands of backpackers throughout the year as they work to fund their visit to Australia.

The pay is not significant and the work not certain as it depends on what crops are in season and how good is the harvest.

In Gatton, nestled off the Lockyer Valley Highway between Ipswich and Toowoomba (about 80km west of Brisbane), many of the backpackers seek shelter during their stay in the town caravan park – often stretching the caravans to capacity as they seek to minimise financial outlays. Because most are working to a tight budget and put aside as much money to fund other legs of their journey, they skimp and save.

GattonBackpackers.com says that, from late April to December, the numbers of backpackers swell as that was the best time of year to find work although some work could usually be found any time during the year depending on the type of work and the season for the crop.” 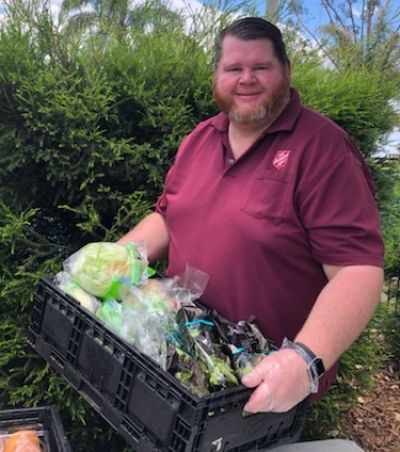 Auxiliary-Lieutenant Rhys Wilson unloads a crate of fresh food to hand out to backpackers at the local caravan park.

This is where Auxiliary-Lieutenants Rhys and Tiffany Wilson from Lockyer Valley Corps have stepped in.

The couple began a ministry in 2020 to the caravan park, the Freedom Lifestyle Park, handing out fresh fruit and vegetables and other supplies to the backpackers living there.

Tiffany said the couple saw potential in the ministry through conversations and connections through the corps’ Family Store and speaking with people carrying “heavy bags” of groceries from the shops to the caravan park.

Rhys said the transient nature of the people they helped was significant but believed it was important to sow the seed of the Gospel in their hearts and minds while they were there.

While the Army historically had expectations that people would come to church as a result of its ministries or programs, the Wilsons said they knew when they began the ministry they might not see “returns” for their faith community.

Tiffany, known affectionately as ‘Salvo Girl’ around town, said the backpackers worked hard. They would be picked up by a bus around 5.30am and returned about 1pm “absolutely dripping in sweat or exhausted and covered in mud”. Farm work is mainly vegetable picking or packing produce such as lettuce, cabbage, broccoli, cauliflower, sugar loaf, celery, tomato, broccolini, wombok, capsicum, potato, watermelon, pumpkin, mushrooms and a variety of herbs.

She said the group at the caravan park was as eager for the Army to turn up each Monday as the Wilsons were to “connect and bless them”.

“What I find is that a lot of the countries they come from, they don’t get things for free,” Tiffany said. “It takes them a (while) to comprehend that we’re giving this for free and they all are so confused. They ask ‘But what do I have to give?’.”

Rhys said that confusion “quickly turns to gratitude once they comprehend that we’re just here to bless them and give the food”.

“They’re the most grateful people,” Tiffany said. “A loaf of bread to us is not much but for them it is a lot.

“They are genuine people,” Rhys said, indicating they would only take what they needed for the week and not take the food because it was there and free.

“They sort of expect us to come on a Monday (but) they don’t expect us to come just so they can get the food. They sit around waiting for us to come because they know we’re going to be able to connect with them and bless them and they love seeing the Salvos roll in.”

The food is provided through Second Bite, which, according to the not-for-profit organisation, “rescues and redistributes food for people in need”.

Rhys said there had not been as many seasonal workers in the town this year, which he suggested was because of state and territory border closures due to COVID-19 pandemic movement restrictions.

He said that pre-COVID, the caravan park would be home to up to 70 backpackers with several people crammed into one caravan. “At the moment it’s 15-20 people in total. But the dynamic changes week to week,” Rhys said.

Rhys said although the majority of workers stayed in the town for up to three months, some stay longer, which gives him and Tiffany a chance to build good relationships that often result in faith-based questions.

“That’s what all this is about; just talking to people; asking questions,” Rhys said. The bonus here is we get to help someone’s material needs by providing food but, beyond that, the relationship comes out in what we talk about when they actually nail us down and start asking questions.”